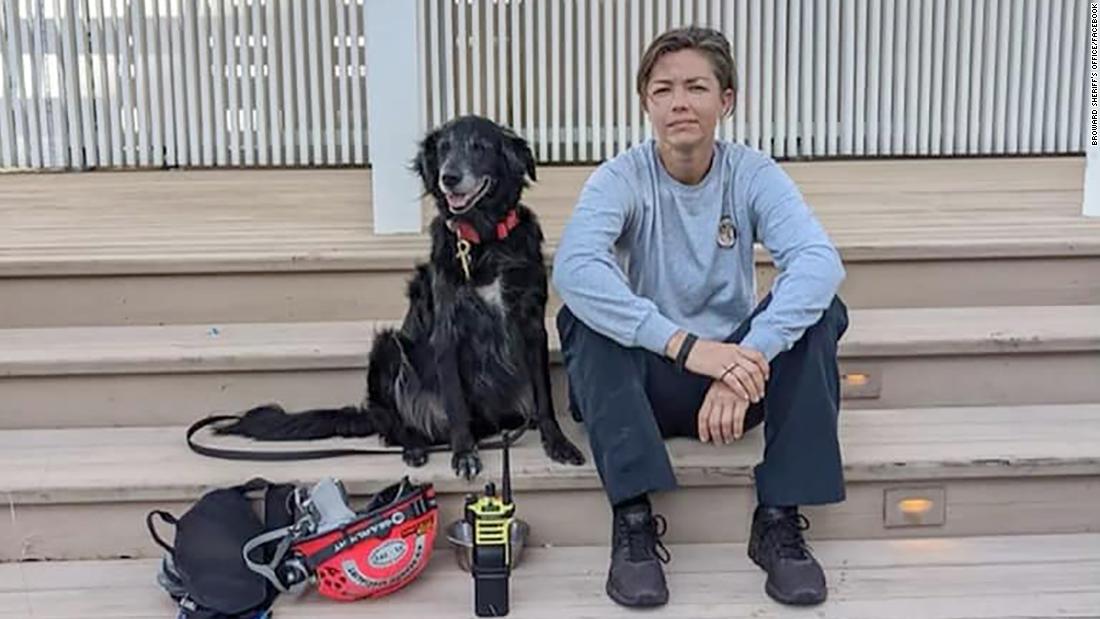 The crews at the site work 12-hour shifts, many sleeping in tents nearby instead of going home. The effort has paused only briefly — for lightning and the demolition of what had remained standing of the complex — since the building pancaked in the early hours of June 24.

And while the physical work in the South Florida heat can be grueling, the mental toll can be just as great.

And then the enormity of the task pushes her on.

“I bring back into mind the families and friends that want some closure, and are just desperately waiting for any information. And that gives me the strength and motivation to keep digging,” Notte said.

Notte has been at the site since 45 minutes after the collapse, with just one brief respite at home.

There are several times every day when scale of the tragedy hits her.

“Some of them are sparked by the things that I find out there. If I find a baby pictures,” Notte said. “I think the first time it really hit me was when I found a passport with a baby in it. And then I found the entire family of passports in there as well. Those are the moments that I take a deep breath and kind of, I’m very in my head, in that moment.”

The hardest day, Notte said, was finding the body of the daughter of a Miami firefighter, 7-year-old Stella Cattarossi.

“Everything shut down when we found her,” Notte said. “We all lined up. And you could hear a pin drop on a construction site, which is just eerie, and amazing and beautiful all in one.”

“I have visions of them carrying her down the line of firefighters and first responders, and everyone just so intently, seeing reality,” the chief said.

“It’s always harder when it’s personal. And that was very personal for us.”

Notte is a veteran of this kind of work, with years spent at the Broward County Sheriff’s Office and the Florida Task Force II.

She was featured, along with her search and rescue dog named Dig, on the Broward County Sheriff’s Office Facebook page on June 27.

“Battalion Chief Notte will rest, sometimes cry, shore up her strength, and she and Dig will return to work, searching for signs of life,” the office wrote.

This deployment has been different from other assignments, Notte said, for one heartbreaking reason.

“I don’t think there’s been one deployment that we haven’t saved somebody,” she said. “That’s been really hard for us. I mean, we would love to even just say, like, we saved somebody’s dog, I mean anything.”

“And it’s just been so challenging to not hear somebody say, ‘Hey, thanks a lot for helping me out of that.’ Not that we need thanks — that’s not what I meant by that — but to shake the hand of a victim would be nice.”

Instead, 79 bodies have been recovered from the site, and 61 people are unaccounted for as of Friday night. And midweek, the effort turned from a search and rescue operation to a search and recovery effort, meaning there was no longer hope of finding survivors.

Everyone working at the site has moments when they need emotional support to deal with the task, Notte said.

But, she said, the team members have one another.

“I feel so honored and privileged to be a part of the scene of such a group, such a hard-working group, and we can also rely on each other like a family relies on each other,” she said.