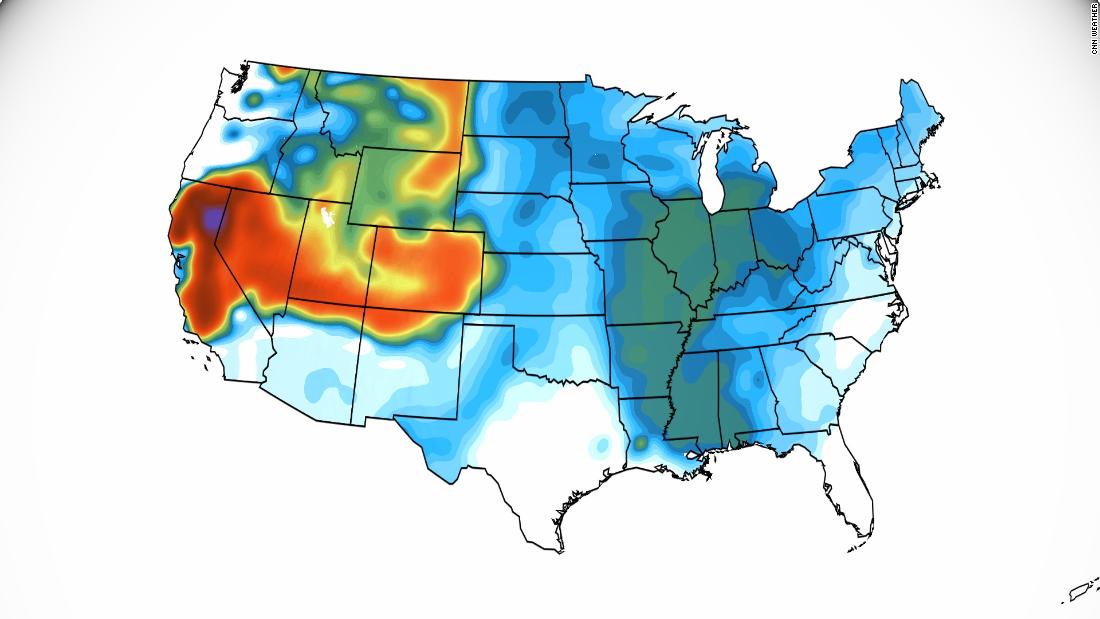 This summer, air quality alerts have stretched as far as the Northeast, as massive wildfires in the West and Canada engulf swathes of land and emit gray clouds of particles. The closer the fires, the worse the air quality.

Air quality sensors near the Dixie Fire picked up readings higher than 800 Friday –– worse than the hazardous level in the “beyond index.”

Places in northern California near the fires, and all of Oregon and Washington, have had little reprieve. But it is not just communities near the fires. In states like Montana and Colorado, smoke blankets the region, impairing air quality.

“We’re part of a large area that’s had smoke from the whole conglomeration of fires over the Northwest that’s moved east across the Northern Rockies and out onto the northern plains, and so the whole area has had poor air quality,” said National Weather Service Boulder meteorologist Chad Gimmestad.

Smoke has stationed itself over the region throughout the week impairing the air.

“The entire state of Colorado has periodically received influxes of wildfire smoke over the past week, and particularly the eastern half of the state (including Denver). This has increased fine particulate concentrations (PM2.5) and also enhanced ozone pollution throughout the Front Range region,” said Scott Landes, the Air Pollution Control Division’s chief air quality meteorologist for Colorado.

Air quality alerts are in effect along the Rockies’ front range in Northern Colorado Friday due to the far-reaching effects of smoke from western fires, with more smoke forecast to make its way into the area through the weekend.

“Air conditions are expected to worsen this weekend as a massive plume of wildfire smoke from California fires approaches Colorado from the west. Impacts will begin to be felt as early as Friday afternoon with smoke spreading across the state over the weekend,” Landes said.

Wildfire smoke in the area is traveling hundreds of miles from California and Oregon to position itself over the Rockies, hurled high enough by hot wildfires to make the journey.

“These big smoke plumes are fairly high in the atmosphere and get carried a long way by those winds off the ground. And then also, every day there’s kind of this mixing that goes on in the atmosphere. So even if that plume is aloft as it leaves the fire, the next day when the smoke is over Montana, Wyoming, Colorado, it gets mixed back down to the ground, and so that everything gets stirred. So, we’ve got this huge smoky air mass over and over the northern part of the country,” said Gimmestad.

The smoke is expected to continue impairing air quality when another wave of heavy smoke from the western wildfires moves into northern Colorado by Saturday.

“We’re going to be getting smoke more directly from Northern California and Oregon over the weekend, so it’s a little bit better today, but then it’s going to be worse again,” Gimmestad said.

For Coloradans, hazy sunsets and raspy lungs are part of the dog days of summer.

In the 2020 fire season, multiple fires joined the ranks of largest in Colorado’s history, including the Cameron Peak Fire — the largest ever to impact the state.

“After 62 days of burning, on October 14, the Cameron Peak Fire became the largest recorded wildfire in Colorado’s history, surpassing the Pine Gulch Fire that burned near Grand Junction in 2020,” according to InciWeb.

The fire was located in northern Colorado near the Rocky Mountain State Park. Alongside Cameron Peak, another large fire burned simultaneously. The East Troublesome Fire also ranked in the top three largest fires in Colorado history.

Similar conditions are plaguing the Northwest this summer after reoccurring heat waves and historic drought, leading to extreme fire behavior, including pyrocumulus clouds launching ash into the atmosphere and dangerous conditions. Their smoke is settling in the regions of Colorado that remember what fire season can bring all too well.

“Definitely the first few days that we had smoke this summer I think everybody was like, here we go again even though it was mostly coming from fires that were long ways away. I think a lot of us kind of have some trauma from what we saw last year, and it does bring that back,” Gimmestad remarked.

Summers full of milky skies and the smell of charred forest are common in the Rockies and becoming increasingly typical as fire seasons get more extreme.

“We have seen consecutive years, most recently the last five years, of some really extreme fire seasons. The centralized areas where those extreme conditions are might change like this year, we are seeing them in the middle of the Northern Rockies area into Montana. The focus area does shift but the tendency for us to see extreme fire seasons does remain the same,” said Robyn Heffernan, National Fire Weather Science and Dissemination Meteorologist.

In past years the extreme fire season has focused on California and Colorado, like the record-breaking 2020 season. The focus this year includes the Northwest and has shown the impacts of drought and heat on wildfires, and Heffernan says all of it is linked to climate change.

“We’re dealing with more extreme weather events which means more extreme droughts, more extreme heat when we get into those phases which leads into things like bug kill with our trees and types of things that make our forests more susceptible to burn. There are a lot of things at play here that have brought us to this point of these significant wildfire years,” she said.

The increasingly brutal nature of wildfire season has started to impact the daily lives of Coloradans, even those who live away from the forests. This year, they’re being impacted by fires hundreds of miles away.

“We like to be outside a lot and it’s usually a really healthy thing, and some of these days it’s actually not a healthy thing to be outside and that kind of upends our way of life here. We love to get out and bike or hike or go climb a mountain or whatever, and there’s days where it’s really not that good to do it and so it messes with our way of living,” said Gimmestad.

Air quality impaired by smoke can be dangerous not only for at-risk groups, but healthy people.

“Exposure to high levels of fine particulates and ozone has negative health outcomes for everyone, but particularly those that suffer from heart or lung disease, older adults, and children. Fine particulates work their way into your respiratory system and can make it difficult to breathe,” said Landes.

Particulate matter from smoke, or “coarse visible and fine invisible particles including soot and ash that can reach deep into the lungs and may contain irritating and cancer-causing compounds,” are especially threatening to health and well-being, according to the Colorado Department of Public Health and Environment.

“I mean, you just have to think about the air quality every day. Maybe I want to do something in the morning when it’s not so bad, or this isn’t a good day. I should wait until tomorrow. That’s been common last year, and this year and we used to have a few days where that would happen, but it’s kind of gotten to be an everyday thing last year and this year it’s not good,” Gimmestad said.

Ozone, a respiratory irritant, is normally a cause of concern for Colorado in the summertime.

“During a typical summer in Denver air quality is normally poor during the afternoons/early evenings when ozone hits its peak, so the public can still exercise/spend time outdoors during the morning to protect themselves. However, during the current scenario when wildfire smoke is added to the mix, air quality is poor throughout the day which increases the opportunity for negative health outcomes,” Landes advised.

The scenic landscape of the Rockies, with purple mountains majestically bearing beautiful trails and lakes, beckons natives and visitors alike. But as climate change brings more extremes and fire season continues to evolve, smoke could increasingly become a filter over the picturesque mountain scenes, in Colorado and across the country.