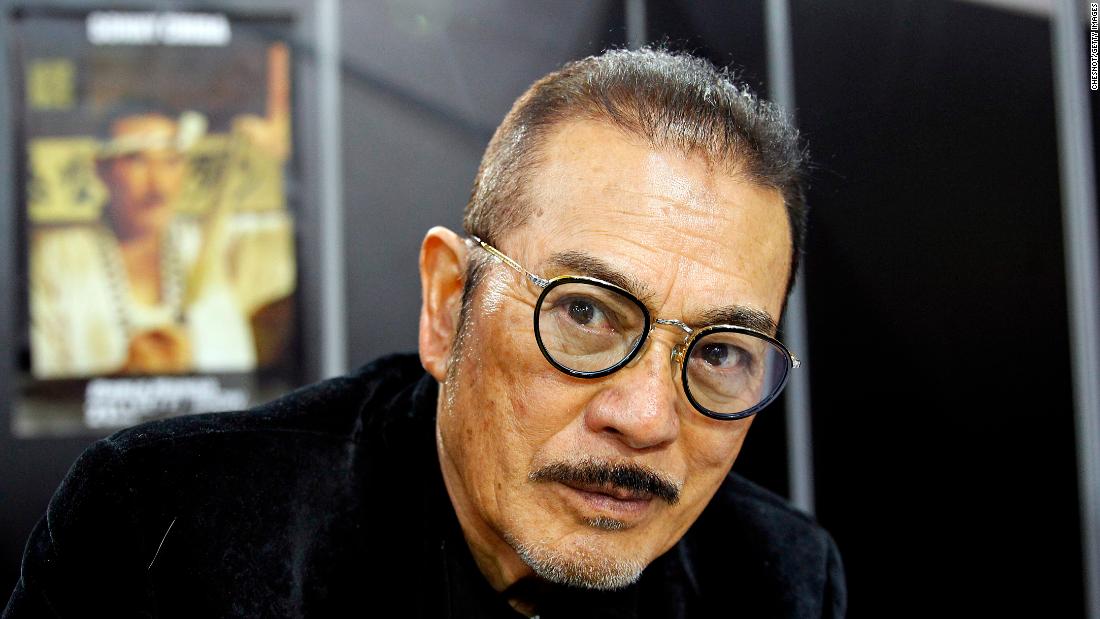 Chiba, a star of martial arts cinema in his native Japan, made his name by landing heart-stopping punches and stabbing fictional foes in the throats with only his fingers. His relentlessness onscreen inspired action auteurs like director Quentin Tarantino and actor Keanu Reeves to emulate his style in their own works — and thrilled viewers when they weren’t covering their eyes.

Chiba, a ferociously talented martial artist whose international renown grew with films like “The Street Fighter” and “Kill Bill” series, died this week from Covid-19 complications, his representative Timothy Beal confirmed to CNN. Chiba was 82.

Chiba, born Sadaho Maeda, got his start in martial arts by training with Mas Oyama, considered a master of karate. And master it, Chiba did — he earned several black belts during his time under Oyama’s wing, according to Variety. He wouldn’t show off his martial arts skills onscreen until 1973, in the film “Karate Kiba.”

Comparisons to famed Hong Kong American martial artist Bruce Lee were inevitable. But Chiba’s distinct fighting style was unlike anything Lee attempted. Chiba went ballistic on his enemies and appeared to use more force to land his blows, a method that de-emphasized the choreographed nature of his cinematic spars. And his characters almost always killed his opponents.

Any similarities to Lee were squashed with the 1974 release of the shockingly violent international crossover hit “The Street Fighter,” in which Chiba, as martial arts mercenary Takuma Tsurugi, socks a man hard enough to make him lose several teeth, and crushes another man’s skull. Chiba’s protagonists were ruthless antiheroes who were willing to spill blood, a character trait that informs many contemporary action films.

“For me, the most enjoyable role to play is the bad guy,” he said in a 2007 interview with UK TV personality Jonathan Ross. He gushed that one particularly brutal scene that cut to an X-ray of a skull after Chiba’s character smashed it was his idea, a workaround to show the damage of a blow without attempting the blow itself, he said.

Chiba’s style earned him famous fans like Tarantino, who first referenced the great martial artist in the 1993 film, “True Romance,” for which he penned the screenplay. Chiba would later appear in both of the director’s “Kill Bill” films.

He was kinder than his fearsome film roles let on

Chiba had a prolific career in film and TV, with more than 200 credits on IMDb. Western audiences may have seen him in 2006’s “The Fast and the Furious: Tokyo Drift,” in which he played a ruthless Yakuza boss, but most of the films and series he made in the latter part of his career were Japan releases.

Chiba had another film in the works before his death, said Beal, his representative, in an email to CNN. Despite what his adversarial roles would have audiences believe, though, Chiba was a “humble , caring and friendly man,” Beal said.

That was evident in a 2015 interview with Keanu Reeves. The action star of “The Matrix” and “John Wick” told a Japanese media outlet that Chiba was one of the greatest actors of martial arts cinema. Chiba then surprised Reeves during the interview and praised “John Wick,” visibly delighting Reeves.

“Character and action … you brought together,” Reeves told him. “There was always heart to [Chiba’s characters.]”

Chiba joked that he could learn a thing or two from Reeves, even though Chiba arguably created the blueprint artists like Reeves tried to follow for decades. Chiba, as Takuma Tsurugi, ripped throats out with his bare hands before Reeves, as John Wick, could creatively kill adversaries with a well-placed pencil. He never made it look easy — his characters’ faces betrayed the pain he felt as often as he dealt out pain to his enemies — but the ambivalent tone he struck in his performances inspired much of the action fare viewers today love.