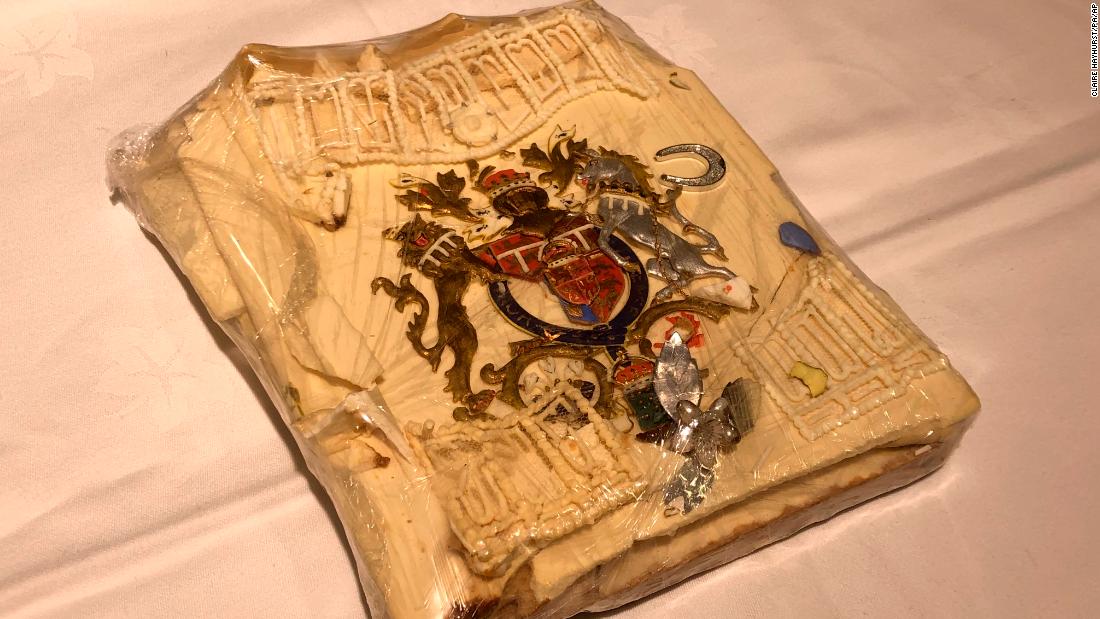 Weighing about 28 ounces, the slice comes from one of the 23 cakes made for the royal wedding, according to Dominic Winter Auctioneers, in Cirencester, western England.

It was originally estimated to fetch between £300-£500 ($416-$693), but there was so much interest in the lead up to the sale on Wednesday that it was impossible to predict what it would sell for, auctioneer Chris Albury told CNN on Thursday.

“It really seemed to capture a lot of people’s imaginations, and wallets,” said Albury, adding: “£1,850 was very unexpected.”

The cake slice features a coat-of-arms colored in gold, red, blue and silver, a silver horseshoe and leaf spray, as well as some white decorative icing.

The slice of cake was stored in this tin. Credit: Claire Hayhurst/PA/AP

It appears to be part of one of the cakes sent to royal staff and was given to Moyra Smith, who worked at Clarence House for the Queen Mother, the auctioneer said.

The 40-year-old slice, which has been kept in plastic wrap in an old cake tin, was sold to Dominic Winter Auctioneers in 2008 on behalf of Smith’s family.

Aside from the white icing having dulled a bit, the cake has been well preserved, he added.

Charles and Diana pictured in a carriage after their wedding. Credit: AP

The winning bidder is coming to collect the slice on the train from Leeds on Thursday, Albury added.

While slices of cake from other royal weddings do regularly come up for sale, the fact that this item is such a large piece of one of the official cakes makes it stand out, said Albury.

“I’ve not seen anyone else trying to sell anything like this,” he said. “It’s quite a lump.”

The auction also included printed Ceremonial and Order of Service programs for the wedding, which had an estimated worldwide television audience of more than 700 million people. The listing included a memorial Royal Wedding Breakfast menu and table seating program.

The auction came just a few months after Princess Diana’s sons agreed to loan her wedding dress to go on public display at Kensington Palace. A car Prince Charles gave Princess Diana as an engagement present also recently went up for auction, selling for more than £52,000 ($72,000).