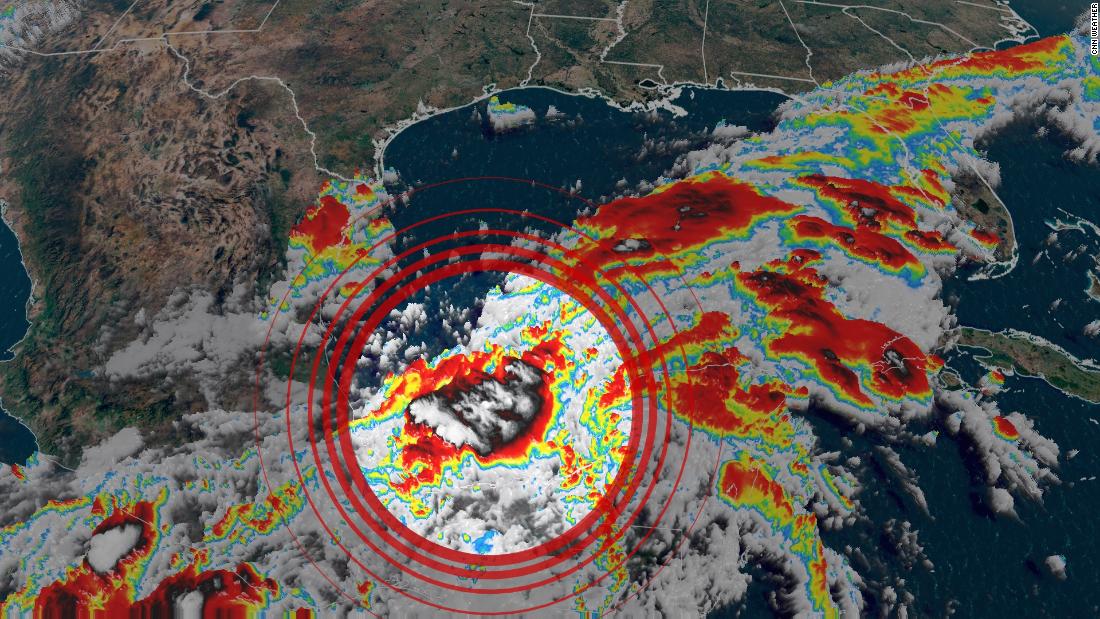 This tropical wave is currently located over Mexico near the Yucatan Peninsula but will track over the Bay of Campeche and Gulf of Mexico tonight.

In the short-term, heavy rain will affect eastern portions of Mexico between now and at least Monday, threatening the region with flash flooding and mudslides. Some locations could receive more than 4 inches of rain.

As the storm tracks over the warm waters of the Gulf, it could intensify and will likely become a tropical depression Sunday or Monday, according to the National Hurricane Center.

In the early stages of a developing tropical wave, when it has the potential of becoming organized into a named tropical storm, the track and intensity forecasts are often uncertain.

There is increasing confidence a tropical depression or storm will form, early next week over the western Gulf of Mexico.

The more uncertain aspect of the forecast is where the area of thunderstorms will track. As the disturbance develops and heads north, computer models show a variety of solutions, because models have a hard time forecasting the center point of a system before the center point has actually formed.

Some model guidance suggests the tropical entity could hug the eastern Mexico coast or track over it while eventually moving into Texas by Tuesday.

Other models keep it over the water and eventually bring the storm into Texas or as far east as Louisiana. The second solution would favor a more organized storm which can intensify, given tropical disturbances thrive over warm water.

“Further development will be possible through the middle of next week if it remains over water, and interests along the western and northwestern Gulf coast should monitor the progress of this system,” stated the National Hurricane Center.

If a storm were to form and follow a track over water, the worst weather and landfall could happen as soon as Tuesday.

Regardless of the uncertainty, there will be heavy rain for Texas and perhaps Louisiana beginning Sunday and lasting into much of next week, given the slow movement of this tropical disturbance.

“What we do know is that we`ll continue to see Gulf moisture continuing to flow inland well into midweek… continuing the rain chances,” the National Weather Service in Houston confirmed.

Flooding is the greatest concern

Tropical systems often bring heavy rain with them, resulting in the risk for flooding, most recently, Hurricane Ida, the remnants of which brought catastrophic rainfall totals to the Northeast, killing dozens of people.

“The National Weather Service office in Houston is concerned about rainfall rates of 3 inches per hour, which, if this transpires, will lead to significant flash flooding,” CNN meteorologist Haley Brink reported Saturday.

New York City received a record 3-plus inches of rain in just an hour, which caused flash flooding.

Rainfall totals remains uncertain, and depending on the track of the storm, some coastal sections of Texas could see 5 to 10 inches of rain over the next week.

“The movement of the disturbance remains questionable, along with its size and strength, as models vary greatly with these parameters,” the Weather Prediction Center noted.

There is a Level 2 (on a scale of 1-4) risk of excessive rainfall for coastal Texas into Monday night, according to the Weather Prediction Center, and it is possible the risk could become greater Tuesday.

Aside from heavy rain near the coast, the tropical disturbance will pose the risk of rip currents and waves reaching dunes, said the weather service in Brownsville. In addition, tides next week will be higher than normal — known as the King Tides — which could cause additional flooding.

Friday was the climatological peak of tropical activity in the Atlantic basin and it is definitely active.

Hurricane Larry has become a post-tropical cyclone and is now impacting Greenland, dumping heavy snow on parts of the country.

There are also three additional areas the National Hurricane Center is monitoring for potential tropical development.

One is located north and east of the Bahamas with a low chance of forming while the other two are off the western coast of Africa. These will need to be watched as they track west across the open waters of the Atlantic.