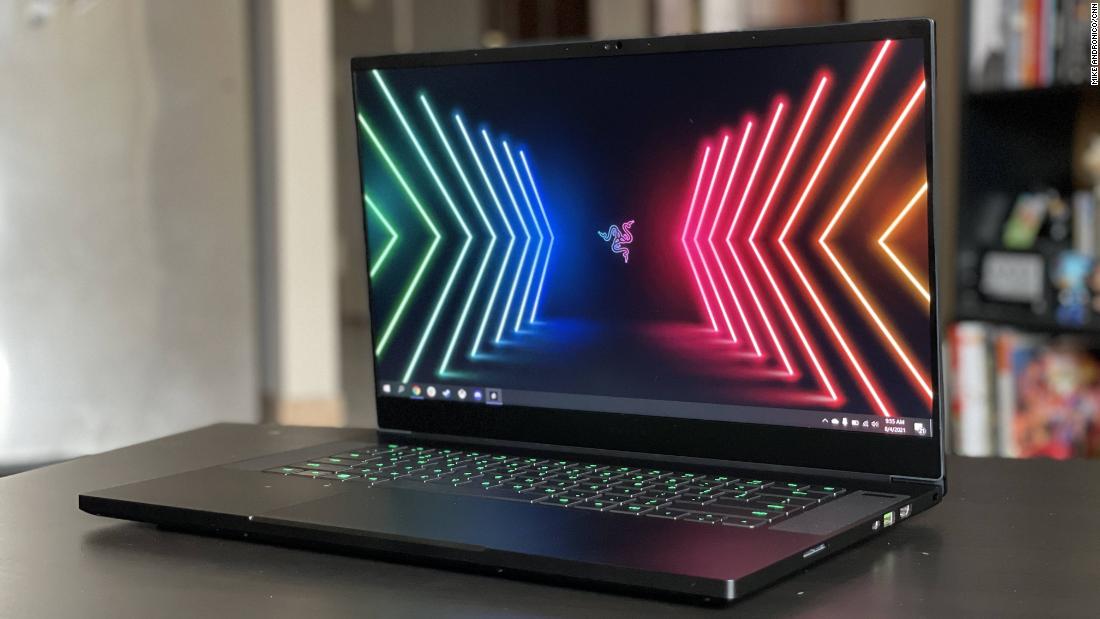 The Razer Blade 15 Advanced might be engineered to run the most demanding PC games in all of their glory, but it’s also just a great work machine. That’s because unlike many gaming laptops, Razer’s high-end notebook has a slim and elegant design that you’ll actually want to bring into the office, not to mention a great keyboard and plenty of productivity power.

Make no mistake though — this thing is still an absolute gaming monster with the ability to tear through the latest blockbusters thanks to the high-end components crammed into its slim frame. It’s also one of the few laptops out there with a 360Hz display (how fast the screen can refresh itself), allowing for a level of smoothness that can literally be game-changing.

Razer’s laptop has been a joy to use throughout long hours of fighting killer robots (and taking breaks to catch up on email and Slack), but is it worth its high price? Here’s what we think after roughly a week of working and playing on Razer’s premium powerhouse.

Who it’s for: The Razer Blade 15 Advanced is for folks willing to splurge on a powerful and sleek gaming laptop that can handle the latest blockbusters at optimal settings while looking understated enough to bring to the office.

What you need to know: Razer’s 15-inch laptop packs a ton of high-end PC tech into its slim frame, resulting in great performance for both games and everyday multitasking. That includes the latest Nvidia RTX 3080 graphics processor, an 11th Gen Intel Core i7 CPU and a 360 Hz display that allows for a level of smoothness you won’t find on most laptops. The customizable keyboard lighting is a nice touch, too.

How it compares: The Razer Blade 15 Advanced is one of the slimmest and most attractive gaming laptops we’ve tested yet. It’s performance is also amongst the best in its class. However, it’s relatively short battery life falls behind rivals such as the $2,599 Lenovo Legion 5 Pro and $1,677 Acer Predator Helios 300. And starting at $2,699 and $3,099 as tested, the Blade 15 Advanced is definitely one of the pricier gaming laptops out there.

Razer has long mastered the magic trick of making gaming laptops that you wouldn’t be embarrassed to bring into a Starbucks, and that trend continues with the latest Blade 15 Advanced. This all-black aluminum notebook packs top-of-the-line components into an impossibly slim design that’s easy to carry around while still feeling sturdy and premium at around four and a half pounds. There are no aggressive-looking jagged edges or bold colors like you might find on other gaming laptops — just a sleek slab of metal that can run Call of Duty really well.

Even with edges that are just over half an inch thin, the Blade 15 Advanced still manages to pack a solid lineup of useful ports. You get two USB-C Thunderbolt 4 ports (the latest standard that allows for fast transfer speeds and connectivity with 4K displays), three USB-A ports for using legacy accessories, a full-size SD card reader and an HDMI port for even more external monitor flexibility. While a dedicated Ethernet jack would be nice, you get pretty much everything you need here for gaming and working reliably.

The Razer Blade 15 Advanced’s keyboard is a total pleasure to type on. The keys deliver a satisfying amount of snappiness and bounce, keeping our fingers comfortable throughout long hours of writing stories and rapidly answering Slack messages. The Blade 15 Advanced’s keys can feel a little small and crowded compared to other gaming laptops we’ve tested (such as the Lenovo Legion 5 Pro ), and you won’t get a full number pad like you will on many other 15-inch gaming laptops. But this more compact design does allow a pair of large, loud speakers to flank the keyboard, and we found the Blade’s superior overall feedback to be largely worth its trade-offs.

With the pre-installed Razer Synapse app, you can tweak the Blade’s keyboard colors to your liking. You can switch between a number of lighting presets, whether you want your keys to cycle through the entire rainbow, sync up with your laptop’s audio output or even pulsate in and out.

We mainly opted for a simple, static purple glow, but the possibilities are pretty endless here. And as a nice extra touch, many Razer Chroma-compatible games (such as Gears 5 and The Sims 4) have custom lighting effects that allow the keyboard to react to what’s happening in-game. We also appreciated some of Synapse’s smaller touches, such as being able to toggle whether the row of F keys perform their standard functions or default to special controls for things such as brightness, volume and media playback.

Part of what puts the “Advanced” in the Razer Blade 15 Advanced is its display, which delivers great brightness and color but really stands out by being one of the most responsive you can find on a gaming laptop right now. This is one of the few notebook displays with a refresh rate of 360 Hz — the higher that number, the more fluidly games and apps can run. Most gaming laptops we’ve tested (even on the higher end) max out around 165 Hz. As a result, the Blade 15 Advanced can run games at a level of maximum smoothness that many competitors can’t match.

Running and gunning in the colorful world of Fortnite felt incredibly fluid on the Blade 15, which ran the game at upwards of 200 to 300 frames per second once we tweaked some settings. It’s worth noting that you’re only going to get these kinds of frame rates on less-demanding games with the graphics not fully cranked up — these kinds of displays are largely geared towards competitive players who value smoothness and precision rather than overall fidelity.

But even if you’re not a pro gamer, you’ll still notice the benefits of the Blade 15 Advanced’s 360 Hz display. Scrolling through webpages, hopping between apps in multitasking mode and even moving the mouse cursor around happens with a level of fluidity that’s much smoother than most laptops we’ve tested, making everyday tasks feel that much more pleasant. When we dropped the refresh rate down to 60 Hz, the difference was immediately noticeable. It’s in line with our experience testing 60Hz and 120Hz phones.

Buttery smoothness aside, the Razer Blade 15 Advanced’s display just looks great. Colors had a bold and bright pop to them, from the candy green of the truck we drove recklessly in Dirt 5 to the lightning-blue arrows we shot out of Hawkeye’s bow in Marvel’s Avengers.

The Blade’s sharp screen is complemented by an impressively loud pair of speakers, which allowed Halo Infinite’s gunfire sounds to come through with an ample amount of punch and made it easy for us to hear our heroes trade banter in Avengers. Once we finally put our controller down to hop on a meeting, we could easily make out our colleagues’ voices on a video call, and had no issues being heard via the notebook’s onboard microphone.

And the Razer Blade 15 Advanced’s webcam is perfectly suitable for video calls — if not stellar. Images we captured on the laptop’s 1080p camera were decently detailed, and the lens was wide enough to pick up distant background details such as the guitar on our wall. However, we looked a bit pale and washed out on Razer’s webcam, and the exposure would jump around frequently and often make us look too dark.

Don’t let it’s slim, unassuming looks fool you — the Razer Blade 15 Advanced is a beast when it comes to performance. Inside a frame that’s just over a half an inch thick is Nvidia’s RTX 3080 graphics processor and an 11th Gen Intel Core i7 chip with 32GB of RAM. All of this combines for a machine that can tear through the latest blockbuster PC games while packing plenty of muscle for serious multitasking.

We had a blast playing games on Razer’s laptop, which managed to run Marvel’s Avengers at 90 to 110 frames per second at high settings (TLDR; that’s really smooth) even as enemies and explosions flooded New York City. When we tried to push the Blade 15 to its limits and cranked the graphics up to very high, we still got a highly fluid and playable 60 to 70 fps.

We enjoyed a similar level of performance when playing titles like Dirt 5 and an early preview of Halo Infinite. When running the in-game benchmark for Shadow of the Tomb Raider — an intensive, cinematic action game — the Blade 15 turned in well over 100 frames per second, eclipsing every gaming laptop we’ve tested so far in the process. Even more impressive is that Razer’s notebook stayed relatively quiet throughout long, demanding gaming sessions. However, the laptop’s underside can get quite hot while running games, so we recommend using it on a desk whenever you can.

Once it’s time to pause what you’re playing and tend to some emails and video calls, the Blade 15 Advanced is one of the most capable Windows workhorses out there. The system never showed any signs of major slowdown under a heavy load of tasks, even as we jumped between a dozen or so apps and 20 Google Chrome tabs while running Marvel’s Avengers in the background. This heavy workload did cause the Blade 15’s fans to start audibly whirring, but not to an obnoxiously loud degree.

While the Blade 15 Advanced offers plenty of power for gaming and multitasking on the go, its battery life is disappointingly short. With the display in 360 Hz mode, Razer’s laptop powered down after just 2 hours and 45 minutes on our battery test, which consists of playing a 4K video on a loop at 50 percent brightness. When we lowered the refresh rate to 60 Hz, the Blade’s endurance improved to a still less-than-ideal 3 hours.

It’s worth noting that gaming laptops generally have lower battery life than their non-gaming counterparts in our experience, due in part to their advanced internals that can suck up a lot of power. Even so, we’ve gotten stronger battery life from other gaming notebooks, including the Lenovo Legion 5 Pro (close to 6 hours) and the Acer Predator Helios 300 (close to 4 hours). To compare that to a typical mainstream Windows laptop, the Surface Laptop 4 (8.5 hours) and Dell XPS 13 OLED (6 hours) both lasted much longer.

The Razer Blade 15 is a premium product across the board, but there are a few different configurations available depending on which features you value most — and how much you’re willing to spend. Here’s a quick breakdown of the latest models.

If you have the cash to spare for it, the Razer Blade 15 Advanced is one of the most powerful gaming laptops out there — and one that you can comfortably bring to the office or coffee shop without getting strange looks once it’s time to do work. Just remember to bring that power cord when out and about.

Razer’s 15-inch laptop will let you play the latest big PC games at their full potential, and its 360 Hz display delivers a level of fluidity that you won’t find on many other notebooks. With the latest Intel Core i7 processor and 32GB of RAM, it has plenty of muscle for getting work done. And it doesn’t hurt that all of this power is packed into a gorgeous design that has plenty of gamer-friendly features (including fun customizable keyboard lighting) without looking like something that came out of a sci-fi movie.

The Blade 15 Advanced’s battery life is a bit of a letdown, and you may get stronger endurance from competitors such as the Lenovo Legion 5 Pro and Acer Predator 300 Helios. And if you’re on a tight budget, the more affordable Blade 15 Base Models are worth taking a look at. But if you’re willing to invest in a gaming notebook that packs great performance and features into an elegant and attractive design, Razer’s 15-inch notebook is one of the best you can buy.