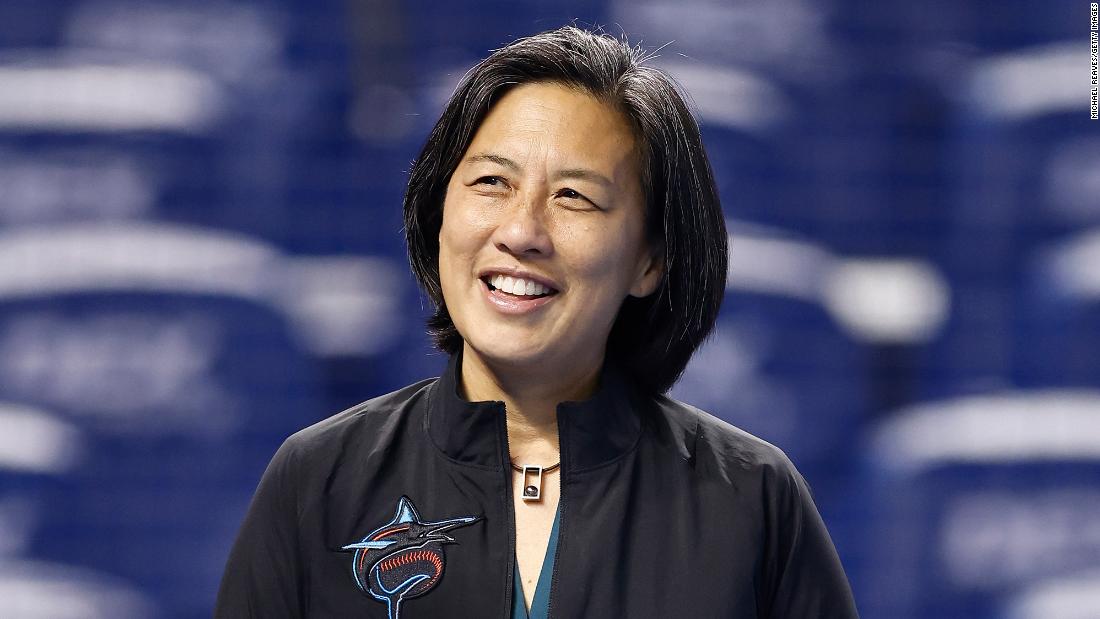 When she was hired by the Marlins in an announcement made last November, Ng became the first-ever woman GM — not only in professional baseball, but in the four major American men’s sports — and the second person of Asian descent to become an MLB GM.

Ng faces not only trying to turn a team with a long history of struggles into a winning franchise, but also working under a different kind of scrutiny than her male peers.

“She’s really going to be under the microscope more than a first-time male GM,” said Bob Dorfman, sports business expert and creative director at Pinnacle Advertising. What’s more, the Marlins are “budgetarily challenged — they have the lowest payroll in baseball or close to it. They have about the lowest attendance in baseball and they have a team of mostly no-names.”

Taking over during the Covid-19 pandemic, which has hurt attendance revenues across the league and occasionally forced players off the field, adds yet another complicating factor.
“When Derek told me I got the job, there was a 10,000 pound weight lifted off of [one] shoulder — and then about a half an hour later, I realized that it had just been transferred to [the other] shoulder,” Ng said during the first press conference following her hiring. “You’re bearing the torch for so many and that is a big responsibility.”

Ng’s interest in baseball began while playing stickball in the street as a child growing up in Queens, New York. She later played college softball at the University of Chicago, where she majored in public policy and wrote her senior thesis on Title IX, the 1972 law that gave more women access to college sports, according to the university.

After graduating in 1990, Ng took an internship with the Chicago White Sox and ascended to assistant director of baseball operations. In 1997, she went briefly to the American League Office before becoming assistant GM for the Yankees and later worked as the Dodgers’ assistant GM from 2002 to 2011.

“I got to see what winning at a high, high level for an extended period of time looked like, and what that took,” Ng said in last November’s press conference. The Marlins declined to make Ng and Jeter available for this story.

During her time at the Dodgers, she interviewed for the team’s GM role and later for the same position with four other teams. Sometimes when she got calls about interviewing for these roles, Ng felt she was there more to fill a diversity quota than for a genuine shot at the job, she told Sports Illustrated earlier this year. She also told the Today Show she suspects she was sometimes passed over because she’s a woman.

In 2011, she joined MLB’s central office as SVP of baseball operations — until she got the call from Jeter.

“This has been too long in coming,” Michael Brady, Florida State University marketing professor and former pitcher in the Dodgers’ minor league system, said of Ng’s hiring.

Critics’ often argue women don’t play pro baseball. But Brady said with many current GMs having no experience beyond high school baseball, “I think she has better experience being a college softball player than roughly half of the guys who are general managers now.”

At less than a year as GM, Ng is experiencing the challenges of reviving the Marlins: This season, the team is ranked second-to-last in its division and will again miss playoffs after finally making it back last year.

After a series of injuries contributed to a decline in the team’s performance in June, Ng told reporters: “Our depth is being challenged.”
The Marlins are also plagued by legacy issues that have shrunk its fanbase and made it an unappealing destination for top players. After joining the league in 1993 as an expansion team, it won World Series championships in 1997 and 2003, but following both wins, it traded away players key to clinching those titles.

“After they do well, they don’t reinvest in their top players, and really try to approach their roster with a small budget,” Brady said.

Although those decisions weren’t made by the team’s current ownership, the reputation has stuck. It’s made players wary of joining the team only to have their careers cut short even if they achieve success, Brady said. And it burned fans who invested in tickets to watch a winning hometown team, only to see its performance nosedive. Jeter, who took over as part of a new ownership group in 2017, has said he hopes to build a more sustainable Marlins.

The Marlins’ disappointing record compounds another challenge for maintaining its fanbase: Florida is a famously difficult market for MLB teams, partly because many residents are transplants from other states, Brady said. So the Marlins have struggled to bring in fan-based revenue, including ticket, merchandise and parking sales, plus potentially lucrative television contracts.

While GMs typically focus on baseball operations, Ng has already indicated that her turnaround plan will involve working closely with the business side of the franchise, something experts say is essential for growing the team’s payroll and attracting top talent.

“From a business perspective, I want to be out there more in the community,” Ng said. “I want the Marlins to be seen as a pillar of the community, so I will be out there at different functions, to make sure that people understand who we are and where we’re going.”

Attracting promising young players is also crucial to building a championship-caliber team, baseball experts say. And there’s some hope: The team has one of the top-rated minor league systems and a roster of talented young players. Ng has made it clear player development is a top priority.

In that first press conference following her hiring, it took 45 minutes for reporters to ask Ng about her strategy for the Marlins. In between queries about her perseverance through her long career, her mentors and her upbringing, she fielded a variety of questions about children, especially young girls. Specifically, she was asked how she feels about inspiring them, how they inspire her, what she would say to them and so on.

While Ng — who has spent countless hours advocating for women and working to expand opportunities for girls in baseball — answered all of the questions graciously, it was a reminder that women who reach the top of male-dominated fields don’t get to just be good at their jobs.

Justine Siegal, who in 2015 was hired as the first woman to coach in the MLB for the Oakland Athletics, said she experienced as much when pursuing coaching jobs.

“I would do an interview, and they would never ask me a question about pitching,” Siegal, who also founded girls baseball nonprofit Baseball for All, told CNN Business. “It was always: ‘How do you think the players will react to you?’ … ‘Where will you change [your clothes]?'”

She added: “Being a woman, being a pioneer, is exhausting. Not only do you have to be excellent all the time, there’s little room to make errors that many other men make as a normal part of the learning process. At the same time you have to be friendly and you’ve got a responsibility as a role model.”

Ng has a legion of other trailblazing women rooting her on. Among the people who sent notes of congratulations following her hiring were tennis legend Billie Jean King, former first lady Michelle Obama and Facebook COO Sheryl Sandberg. She also has the support of her four sisters and mother Virginia Cagar, who told the New York Times last year: “You go, girl. Show them boys how it’s done.”

The tides in baseball appear to be turning, too. A record 23 women are coaching in the MLB this season, with many others represented in front offices and other key roles. In addition to Ng, Caroline O’Connor, the Marlins’ chief operating officer, is among the highest-ranking women in the MLB.

Ng plans to make good use of the diversity that Jeter has built into the Marlins organization, she said: “It’s with that diversity of experience and background that we’re looking to build a championship-caliber club here in Miami.”