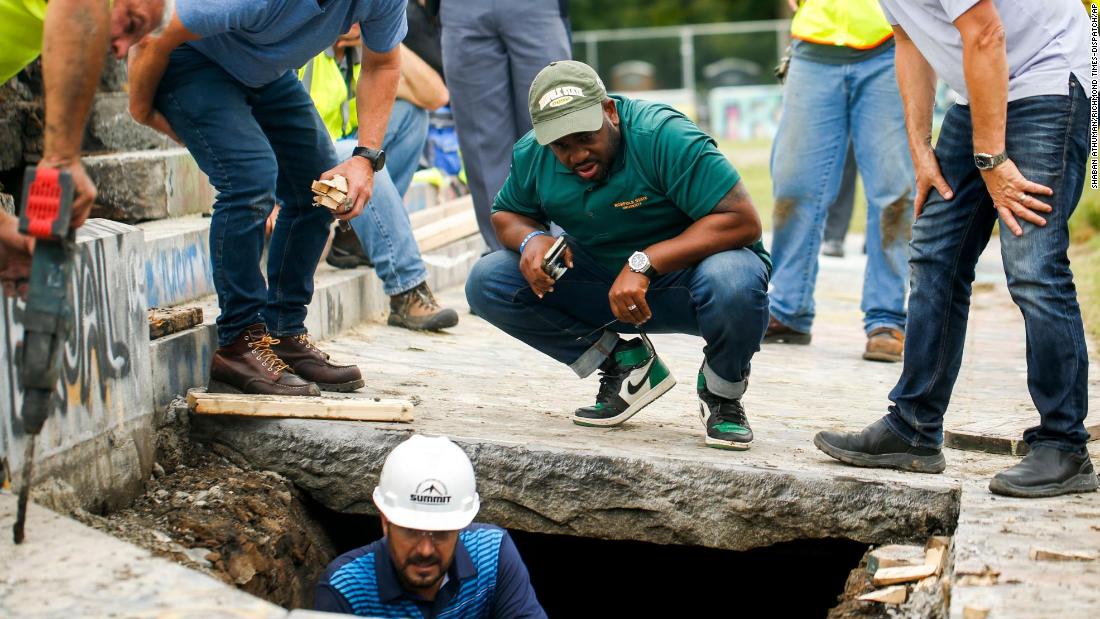 More than a dozen workers spent about 12 hours on Thursday wrestling with the heavy stones at the base of the monument searching for the time capsule.

They used cranes and other heavy equipment to move 21 granite blocks, including some that weighed more than 8,000 pounds, Grant Neely, the chief communications officer for the governor’s office, told CNN in an email. They also dug a large, 5-foot-deep hole near the cornerstone of the monument with shovels.

The plan was to turn the time capsule over to the state’s Department of Historic Resources’ conservation lab, which would examine its contents, but the search came up empty.

“After a couple of long hard days, it’s clear the time capsule won’t be found — and Virginia is done with lost causes,” Neely said. “The search for this moldy Confederate box is over. We’re moving on.”

The 12-ton statue of Lee on his horse was dedicated in 1890 and became a scene of protests following the murder of George Floyd. The pedestal is now covered with graffiti.

On Wednesday, crews used cranes and other equipment to lift the statue from its spot on Monument Avenue in the state capital after the Virginia Supreme Court ruled it could be removed.
In March, experts from Jamestown Rediscovery found a void in one corner of the pedestal after scanning it with an extremely high-frequency ground-penetrating radar typically used for concrete inspections.

The void wasn’t big enough to hold the time capsule, but it was an interesting clue, Jamestown Rediscovery Director of Archaeology David Givens told CNN.

He said he was surprised that the capsule wasn’t found.

“When we’re looking back into the past, it’s not always as easy as people think, Givens said. “This is a community of folks working together to solve this mystery, but we’re basing our research on history and science and archeology, detective work.”

Givens said his team conducted more scans on Thursday to see if they could detect any metal objects or other voids in the monument, but didn’t find anything.

He said he believes the time capsule was placed in the monument because a number of witnesses reported being there for the event, but they didn’t have enough information to find it.

“So the mystery remains unsolved, and I’m good with that,” he said.

An October 27, 1887, Richmond Dispatch article posted on the governor’s website said that the items were donated by 37 Richmond residents and were put in a copper box that was to be placed in the cornerstone of the monument.

The items included Confederate money, uniform buttons, lists of soldiers who served in the war, bullets and other memorabilia from the Battle of Fredericksburg, maps of Richmond at the time and a photo of Abraham Lincoln in his coffin, according to the article.

Givens said the contents would give an insight into the thought process of the people who created the time capsule.

A new time capsule was built for the pedestal that contains 39 items chosen to represent the current cultural moment in Virginia.

It includes a Black Lives Matter sticker and a Virginia is for Lovers pride pin, a photograph of a ballerina in front of the Lee monument taken last year, a booklet with photos of 24 immigrants, prayer beads that belonged to someone who died of Covid-19 along with an expired bottle of the Pfizer vaccine, a mask and a CDC vaccination card.