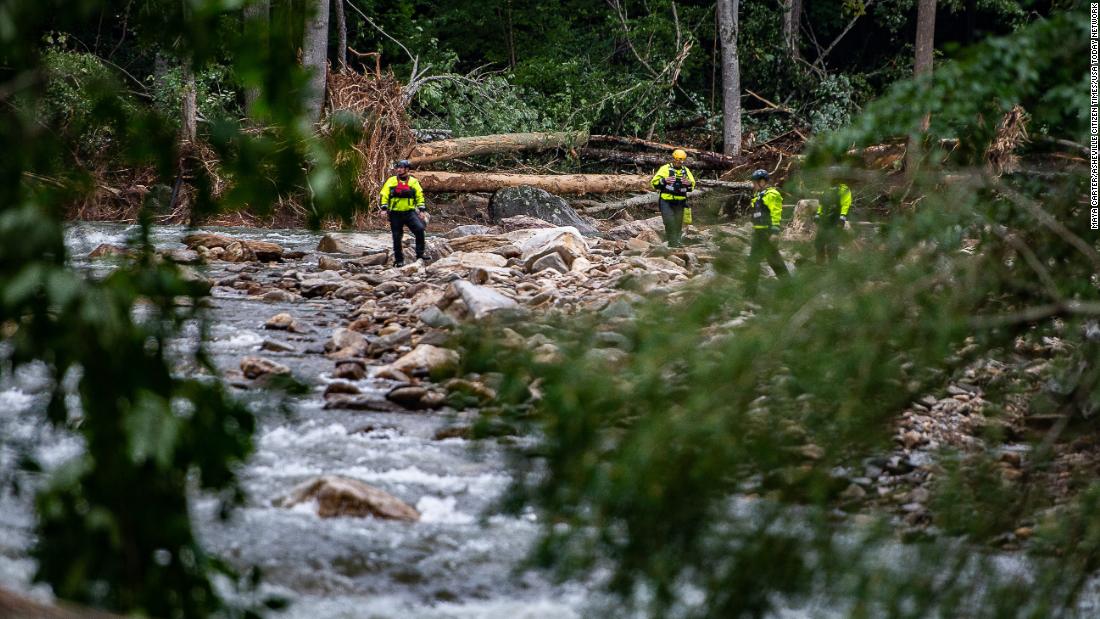 Two people died from drowning when the storm swamped or washed away homes and roads in the western region of the state, Gov. Roy Cooper said.

Cooper toured the area Thursday, saying the number of those unaccounted has “fluctuated.”

“We know that the search and rescue efforts are not stopping until we know where people are or we’ve been able to find somebody,” Cooper said.

Crews are using cellphone tracking along with other methods to find those missing, the governor explained.

“We want to let you know that the state is helping with that, providing cellphone tracking and other things, trying to find people and we’re grateful that people are continuing to look,” he said.

Flash flood watches will remain for areas in northeastern North Carolina, including Gates, Hertford and Northampton, according to the National Weather Service.

Heavy rain drove the flooding in Haywood County, and some parts of western North Carolina received more than 10 inches from Sunday through Wednesday, the National Weather Service said.

Rain exceeded 5 inches from Monday evening to Tuesday evening alone in the Haywood County community of Canton, according to the weather service, raising the Pigeon River to more than 9 feet above flood stage and the highest level since 2004.

“As the water level began to rise, a whole lot faster than I have ever saw it rise here in our county, we soon started to have to rescue people from their homes and provide additional assistance to our residents, and to our fire departments,” Sheriff Greg Christopher said.

About 10 people are in a shelter in Haywood County now, Cooper said. He added that given the rise of Covid-19 cases driven by the coronavirus Delta variant, the state is providing funding to try to find non-congregate sheltering for people in hotels.

Flooding and washouts caused “significant damage” to county roads — especially around the community of Cruso — with 10 to 15 bridges damaged or destroyed, the county emergency services department said.

Based on initial estimates in Cruso alone, around 225 structures had been destroyed, valued at an estimated $300 million in tax value, county officials said.

“What we know is this, we’re going to help rebuild this area. But we also have to keep in mind, that when we build back, we have to be more resilient. Storms are more ferocious than they were before. Climate change has contributed to that,” Cooper said.