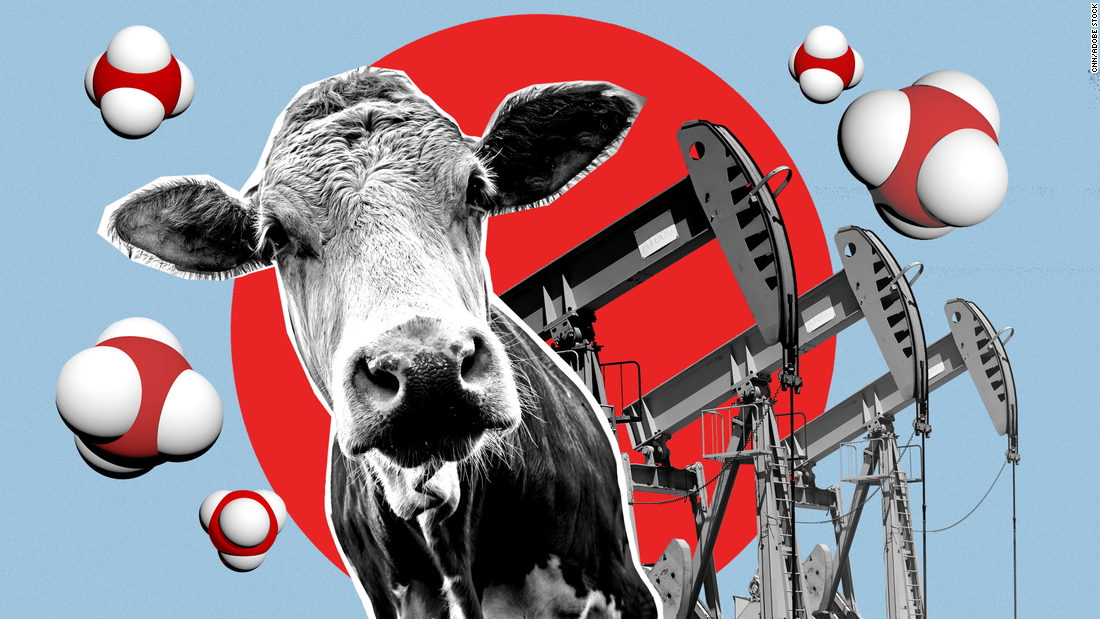 According to the UN Intergovernmental Panel on Climate Change, the concentration of methane in the atmosphere is higher now than any time in at least 800,000 years.

With Earth rapidly approaching the 1.5-degree-Celsius threshold above preindustrial levels, scientists say methane emissions need to be reduced fast. Charles Koven, a lead author of the IPCC report, said this is due to methane’s incredible warming power.

“The fastest way that we might mitigate some of the climate change that we’re seeing already in the short term is by reducing methane,” Koven told CNN. “If we were to reduce methane emissions, it would act to offset one of these sources of warming.”

If the world stopped emitting carbon dioxide tomorrow, Koven said, global temperatures wouldn’t begin to cool for many years because of how long the gas stays in the atmosphere. Reducing methane is the easiest knob to turn to change the path of global temperature in the next 10 years, he said.

Methane, the main component of the natural gas we use to fuel our stoves and heat our homes, can be produced in nature by belching volcanoes and decomposing plant matter. But it is also pumped into the atmosphere in much larger amounts by landfills, livestock and the oil and gas industry.

Natural gas has been hailed as a “bridge fuel” that would transition the US to renewable energy because it is more efficient than coal and emits less carbon dioxide when burned. Importantly for industry, natural gas is in abundant supply around the world and is less costly to extract from the ground.

But proponents for this new “cleaner” gas missed a dangerous threat: that it could leak, unburned, into the atmosphere and cause significant warming.

Methane can leak from oil and natural gas wells, natural gas pipelines and the processing equipment itself. According to data from the US Energy Information Administration, the US has thousands of active wells for natural gas, millions of abandoned oil and gas wells, about two million miles of natural gas pipelines, and several refineries that process the gas.
One in three Americans lives in a county with oil and gas operations, posing climate and public health risks, according to a report by the Environmental Defense Fund.
Until recently, tracking the location and magnitude of methane leaks was difficult. Now, infrared cameras and advanced satellites can estimate methane emissions around the globe, giving scientists and regulators insight into what’s being released from facilities.
Climatologists at NASA and the National Oceanic and Atmospheric Administration previously told CNN that pernicious changes in the climate system will only intensify unless people stop using fuels that burn and leak greenhouse gases like methane.

“For carbon dioxide, we’ve always known about power plants and smokestacks and things like that; but with methane, until recent years, we didn’t understand how much an influence a small number of large sources have really had,” Robert Jackson, professor of environmental science at Stanford University, told CNN. “We didn’t understand how long the tail was and how important the super-emitters were for reducing emissions.”

The latest IPCC assessment highlights that scientists now have a better understanding of how much methane is being released by human activity like agriculture and the fossil fuel industry, and how much it contributes to the climate crisis.

Around the world, fossil fuels, agriculture and coal mining are skyrocketing methane emissions. Nonetheless, the production and sources vary by region. In the North America, a majority — 14% of total methane emissions — come from the oil and gas production followed by livestock at 10%. In China, coal mining is the biggest methane driver, contributing 24% to total emissions.

Though agriculture is a major source of methane, Jackson said the emissions from farming and food production would be harder to tackle.

“There are only certain things we can do with cattle,” Jackson said. “We can either ask people to stop eating beef or we can try and give cattle feed additives to change the microbes in the chemistry of their guts. But that’s not easy to do for billions of cattle around the world.”

The International Energy Agency estimate that the oil and gas industry around the world can reduce methane by 75% using the technology already available. It also estimates that 40% of the emissions could be reduced without extra costs, since the natural gas captured could then be sold.
Climate activists like Lisa DeVille, a member of the Mandan, Hidatsa, and Arikara Nation, are urging policymakers to make stringent methane reductions. The Bakken oil field in North Dakota surrounds the Fort Berthold Indian Reservation, where DeVille lives, with nearly 1,000 oil and gas wells that scientists found in 2016 was leaking 275,000 tons of methane per year.

“This means the land that is part of my identity as an Indigenous woman has been turned into a pollution-filled industrial zone,” DeVille said. “This is unacceptable.”

As the co-founder of the grassroots group Fort Berthold Protectors of Water and Earth Rights, DeVille is tackling environmental regulations head-on. In 2018, the organization successfully sued the Trump administration’s Bureau of Land Management for rolling back a critical methane waste prevention rule.

Global temperatures are now at 1.1 degrees Celsius above pre-industrial levels, according to the report, and the planet is already seeing the impact in the form of extreme fire behavior, severe flooding, relentless drought and deadly heat waves.

“There’s been incredible largely behind-the-scenes effort already to prepare to move faster and more comprehensively to cut methane domestically, at the same time that we’re addressing this as a diplomatic imperative,” Duke said.

“What we do in the next few years will determine what kind of world we have, what kind of world we leave for our children,” said DeVille, who is now seeking to meet with Interior Secretary Deb Haaland to discuss similar issues. “We must rapidly switch to clean energy, stop fossil fuel carbon pollution, and then methane leaks.”

CNN’s Drew Kann and John Keefe contributed to this report.