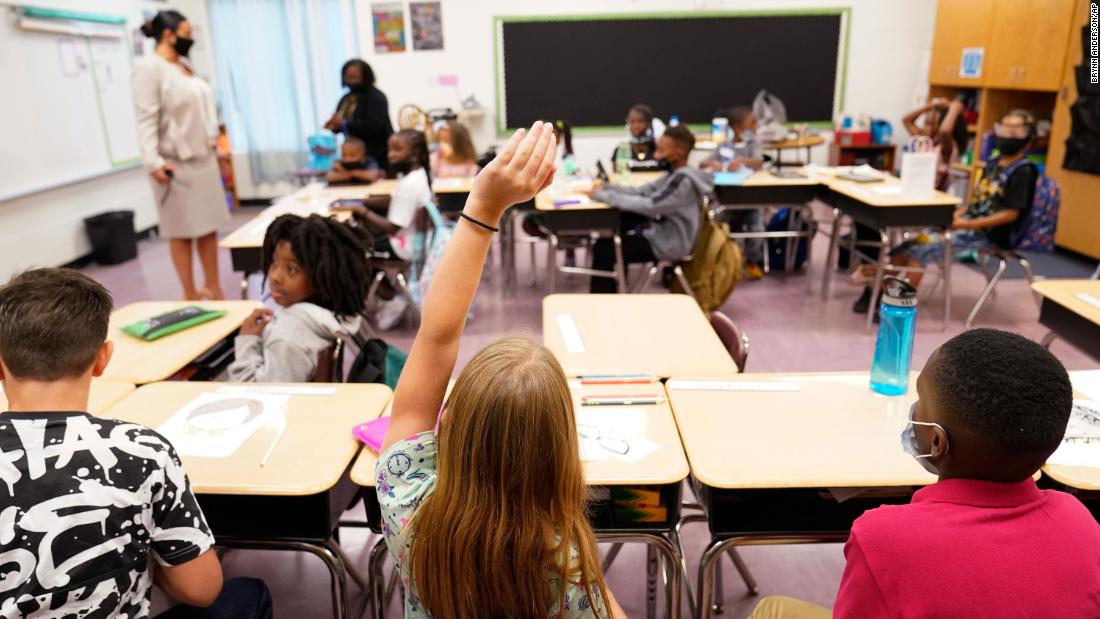 But the real-life evidence about masks leaves little doubt that they work.

But when staff and students do not wear masks, Covid-19 can spread, forcing people to stay home to quarantine and classes returning to virtual learning.

In just this week schools have closed, at least temporarily, in Georgia, Indiana and Mississippi due to cluster outbreaks among students and staff.

On Wednesday, in an elementary school in Cobb County in the suburbs of Atlanta, fifth graders were sent home for virtual learning due to high numbers of Covid-19 cases, according to a school district email sent to parents and obtained by CNN. Masks are optional for students and staff at the school, according to the district’s website, but there is social distancing in classrooms when possible.

“This morning, based on our district protocols and at the guidance of the Department of Public Health in coordination with district leaders, we’ve had to make the difficult decision to have our 5th-grade classes move to virtual learning due to the ongoing COVID-19 pandemic and high positive case numbers,” the email from East Side Elementary reads.

Students will be in virtual learning until Friday, August 20, and return to their classrooms the following Monday.

The Glascock County Consolidated School in Gibson, Georgia is also in virtual classes until at least August 20. Within the first week of school nine students and four staff members tested positive and 99 students and 11 staff had to quarantine.

In Indiana, the Scott County School District 1 told parents on Tuesday that “due to the high rate of positive cases and extremely high rate of student in quarantine” it would switch to virtual learning starting Wednesday.

Several schools in Lamar County, Mississippi switched to virtual learning before the school board voted to maintain a hybrid teaching model. During a board meeting on Monday, Superintendent Steven Hampton said while he believes face-to-face learning is best, a hybrid model would help avoid having all of the schools go virtual.

Politics, but no masks, in the classroom

The National Education Association, the largest teachers’ union in the United States, has been watching the reopening of schools closely.

“In places where the schools have highly communicative, collaborative relationships with educators and parents and community members, and they have an ongoing almost constant system of communication about the factors around their safety plans and reopening, things are going better,” Kim Anderson, executive director of the National Education Association, told CNN.

“In places where they’re not communicating well and in places where politicians are trying to strip the ability of communities to try to protect themselves, things are not going well.”

Implementing mask requirements in schools has become a politicized topic of debate in some states across the country. As of last week, at least seven states — Arkansas, Arizona, Iowa, Oklahoma, South Carolina, Texas, and Utah — prohibit districts from requiring masks in schools.

But there have been some efforts to fight back.

In Arkansas, a county circuit judge has temporarily blocked the enforcement of the state’s law banning mask mandates in schools, in response to lawsuits filed by a school district and parents. In Texas, Gov. Greg Abbott prohibits mask mandates, but two judges there have issued restraining orders temporarily blocking the enforcement of Abbott’s order.
Meanwhile, there is an ongoing battle in Florida, where Gov. Ron DeSantis issued an executive order directing health and education departments to leave it to parents to decide if students wear masks. His office said on Monday that the state board of education could withhold the salaries of superintendents and school board members who disregard the governor’s executive order, which effectively prohibits mask mandates.

Public health officials have been urging schools and parents to keep politics out of the classroom. Dr. Francis Collins, director of the US National Institutes of Health, implored parents on Sunday to see masks for what they really are.

“This is not a political statement or invasion of your liberties. This is a life-saving medical device, and asking kids to wear a mask is uncomfortable, but kids are pretty resilient,” Collins told ABC’s George Stephanopoulos on This Week.

“If we don’t have masks in schools, this virus will spread more widely. It will probably result in outbreaks in schools and kids will have to go back to remote learning, which is the one thing we really want to prevent,” Collins said.

Several studies have shown that masks are effective at reducing the spread of Covid-19.
In June, a study published in the Proceedings of the National Academy of Sciences found that other mitigation measures — such as physical distancing and handwashing — are “insufficient by themselves” in curbing the pandemic without mask use, too.

Dr. Rochelle Walensky, director of the US Centers for Disease Control and Prevention, said last week during a town hall event in Boston that officials are following every jurisdiction and tracking outbreaks that occur in camps and schools.

Dr. Andrew Pavia, chief of the division of pediatric infectious diseases at the University of Utah and an expert with the Infectious Diseases Society of America, told CNN it’s still not possible right now to make predictions about how the school year will turn out.

“We expect that for school systems that are not using universal masking and are in communities with high levels of transmission can anticipate spread in schools. It may take several weeks to judge to full impact,” Pavia wrote in an email to CNN.

“Predictions are challenging, but we expect that school districts that employ layered strategies as recommended by the CDC will have a relatively successful school year.”

Dr. Bayo Curry-Winchell, regional medical director and family physician at Carbon Health in Reno, Nevada, anticipates that more school districts will require masking, Covid-19 testing and other mitigation efforts in the next month or so.
“The Dallas and Austin Independent School Districts are even defying Texas Governor Greg Abbott’s mask mandate ban and requiring all students, staff and visitors to wear masks,” she said. “In regions where state or city officials aren’t implementing mask mandates, school districts will need to take the lead.”

Experts are calling for these prevention measures now in order to avoid more rises in Covid-19 cases and hospitalizations among children later.

As of Tuesday, an average of 203 children with Covid-19 were admitted to US hospitals every day over the past week, CDC data shows. That’s a more than 21% increase from the previous week in daily new hospitalizations among Covid-19 patients up to age 17.
In late July, an internal CDC document noted that the Delta coronavirus variant surging across the United States appears to cause more severe illness and can spread as easily as chickenpox — detailing that one person infected with the Delta variant could spread the virus to five to eight other people on average. With chickenpox, each infected person, on average, can infect eight or nine others.
Schools that haven’t opened yet, but are preparing to in the coming weeks, should realize children are at risk of getting sick, Dr. Purvi Parikh an allergist and immunologist at NYU Langone Health in New York and a spokesperson for the Allergy and Asthma Network, told CNN.

“Schools should be very concerned as children are not only getting infected but are also sick enough to fill up children’s hospitals. Further, many children still aren’t vaccinated,” Parikh wrote, adding that she would encourage vaccinations for all who are eligible and recommend masking and physical distancing in classrooms.

“We will see more cases and outbreaks. Even before the pandemic we saw an increase in viral infections and hospitalizations when schools reopened due to flu, RSV, and other viruses. Now with a highly contagious variant in a pandemic it is like adding gasoline to an already lit fire,” Parikh wrote. “Children need in person learning, let’s help them get it safely.”