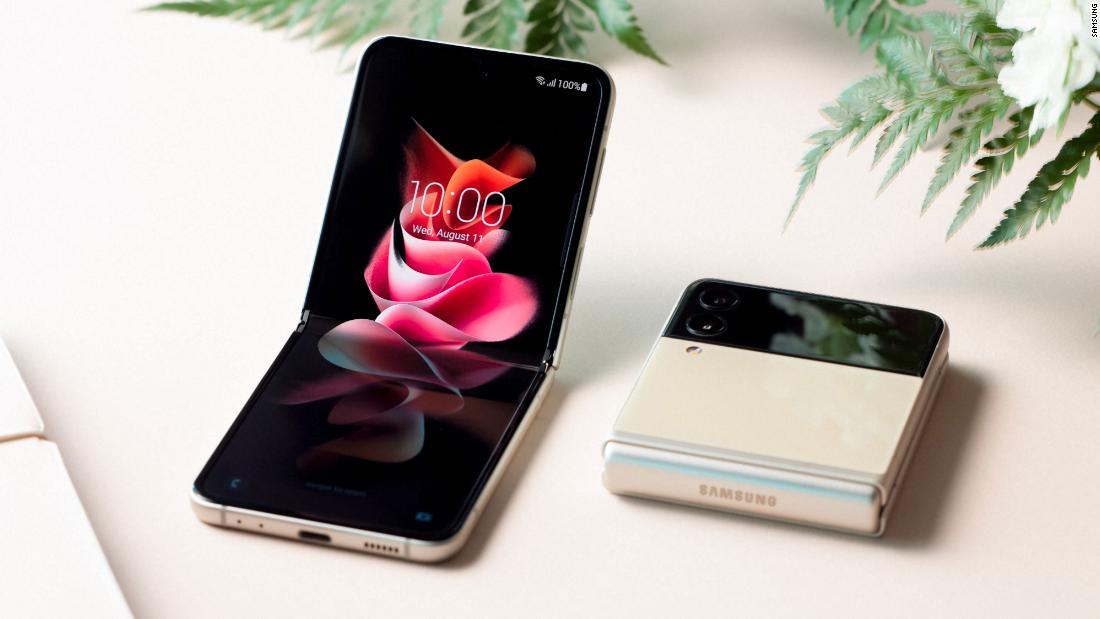 At its annual Unpacked event on Wednesday, Samsung will focus on its foldable smartphones instead of its flagship Note devices — despite lackluster sales for foldable models and a PR crisis in 2019 concerning earlier versions breaking.

Samsung (SSNLF) announced two new foldable smartphones coming later this month: the Galaxy Z Fold3 5G, a smartphone that opens outward like a book to form a tablet, and the clamshell-like Galaxy Z Flip3 5G, with a design reminiscent of flip phones from the early 2000s. While the company dropped the prices for its third-generation foldables, these products will still cost buyers at least four figures.

Samsung said the Z Fold3 and Flip3 are slimmer, lighter, more durable and water resistant than its previous foldable models. These improvements follow hiccups in earlier versions that couldn’t handle drops, dust and water, and presented significant issues with the screen. The devices also feature new ways to multitask, support for the Note’s signature S Pen and an under-screen camera — yes, a camera that lives under the screen that could someday spell the end of the hated notch.

Even with those updates, Samsung has a long hill to climb. According to data from market research firm Canalys, Samsung shipped just 257,000 foldable phones in the three months ending in June, compared with nearly 58 million non-foldable phones. The company’s offerings make up 66% of the total 3.4 million foldable devices shipped since 2019. As Ben Stanton, research manager at Canalys, puts it: “It is still niche … but Samsung envisions this as a new paradigm for the industry — with itself at the center.”

Samsung also may not have had much of a choice this year. The company has been hit with a reported delay in Note manufacturing due to the global chip shortage./ (A spokesperson told CNN Business the company’s decision to focus Unpacked on foldables was unrelated to the shortage.)

Samsung touted the Z Fold3 as more durable and dependable than its predecessors. Its 7.6-inch Infinity Flex display is layered to protect against daily wear and tear and features scratch resistant Gorilla Glass. The outer frame is made of 10% stronger aluminum than previous models, and the infamous hinge, where the smartphone folds, is designed with shorter internal bristles to better repel dust and other particles.

Those features could be key to building up trust in what is still a new design. In 2019, some early reviewers of its first foldable phone, the Galaxy Fold, reported flickering and broken displays and a screen bulge. Even after its official launch was delayed for months to address the issues, user reviews were mixed.

But at least one big obstacle remains for wider adoption: the price. The new Z Fold3 is $1,799, nearly $200 less than its predecessor but still a staggering sum even compared to other premium devices. For comparison, the Samsung Galaxy S21 5G starts at $799, the Galaxy Note20 starts at $999 and the iPhone 12 Pro starts at $999.

To help entice buyers, Samsung is taking a risk by trying something new with this product. In addition to the three cameras on the back (a wide angle, an ultra-wide angle and tele-photo lens), the company teased its first ever under-screen camera. The hidden front-facing camera is built under the display so a notch won’t get in the way of what a user sees on screen. Considering the technology is still in its infancy, it’s possible issues could surface, but Stanton said the Fold3 is the “perfect test bed” for this type of tech because it’s more of a prestige device than a mass market product.

The Fold3 also supports S Pen functionality, allowing users to make the most of its massive screen. For example, notes can be taken on one side of the device while doing a video call on the other side, or a to-do list can be checked off while reading emails. The Z Fold3 is available in black, green and silver.

Foldable displays still lack a solid use case to make them a must-have feature in 2021, but both the Z Fold3 and Z Flip3 have elements that nod to their unique potential.

The Z Flip3, which opens and closes vertically like a traditional flip phone, now comes with a thinner hinge and redesigned cover screen that is four times larger, correcting one of the biggest complaints about the Flip2. It’s now easier to view notifications, widgets and messages, and users will have the ability to eyeball their schedule, purchase a coffee via Samsung Pay, check the weather and monitor their daily step count without ever opening the phone.

Flex mode lets Z Flip3 users take a photo or video from the cover screen. When kept partially folded, users can move a video to the top half of the screen and allow the bottom area to serve as a remote to control the brightness and volume.

Both the Z Fold3 and Z Flip3 include partnerships with Google, Microsoft, and others, so apps better fit the screens. For example, Microsoft Outlook’s dual-pane mode for Samsung foldables lets users read a full email while previewing others on the side, similar to a desktop experience.

Tuong Nguyen, senior principal analyst at Gartner, said much of the success of these products will depend on the apps that developers create to showcase innovative use cases for the extra real estate a foldable screen provides. But convincing developers to spend time creating apps for foldable devices with low user adoption rates will present a challenge.

“It’s a bit of a chicken-egg dilemma,” he said.

The Z Flip3, which comes in cream, green, lavender and black, costs $999 — or $400 less than last year’s model, but nonetheless at the high-end for smartphones.

In addition to foldables, Samsung’s wearables lines got a refresh on Wednesday. Its new Galaxy Watch4 and Galaxy Watch4 Classic — the company’s first smartwatches to run on the Wear OS co-created with Google — promise an even deeper look at a user’s health profile.

The watches are faster, the display’s resolution is crisper and the battery charges faster (the company says a 30 minutes boost will get users 10 hours of battery life). But the real innovation is packed into a new chip with three health sensors. Samsung said the sensors can now assess body composition by measuring skeletal muscle, basal metabolic rate, water retention, and body fat percentage. It also comes with advanced sleep tracking features, such as the ability to monitor snoring.