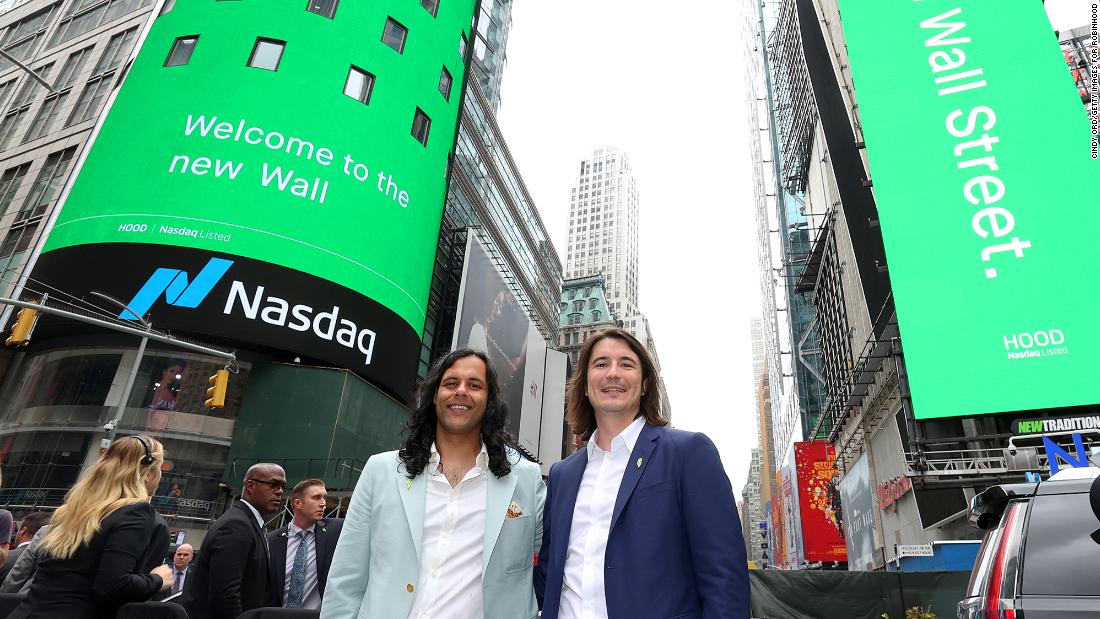 The company reported revenue of $565 million in the quarter. Analysts were expecting sales of $521.8 million. Robinhood said this was the first time more new customers made their first trade in cryptos, such as bitcoin and ethereum, instead of stocks.

But Robinhood also reported a net loss of $502 million, or $2.16 per share. That was much bigger than Wall Street’s forecasts.

Robinhood’s stock fell about 7% after hours following a nearly 7% pop during in-session trading Wednesday ahead of the earnings report.

It’s already been a wild ride for Robinhood investors.
The stock stumbled out of the gate, falling more than 8% in its debut as investors questioned its valuation and criticized the company for temporarily not allowing customers to buy GameStop (GME) and other meme stocks touted by Reddit users earlier this year.

Robihhood has also been accused of “gamifying” investing and catering to younger and less sophisticated traders.

Robinhood had been sued by the family of a 20-year-old customer who died by suicide after mistakenly thinking he owed $730,000 on the app. Robinhood has since said in a regulatory filing that it has settled the case.

But following its early post-IPO growing pains, shares have roared back.

At one point earlier this month, Robinhood shares hit a high of $85 — nearly 125% above the offering price of $38 — as the trading platform became a meme stock in its own right.

Shares have since pulled back to just below $50. But the company is still worth more than $40 billion.

Robinhood is hoping to make amends to traders who may feel disappointed by events of the past few months.

The platform is letting individual investors ask questions on its conference call Thursday, a move similar to what movie theater chain and Reddit favorite AMC (AMC) did on its most recent earnings call.
Platform users were able to submit questions on a shareholder app called Say Technologies, which Robinhood agreed to buy last week for $140 million.

According to Say Technologies, some of the more popular questions were about plans for new products such as cryptocurrency wallets as well as 401(k) and other retirement accounts, launches in international markets and whether investors would get swag like hats and hoodies.