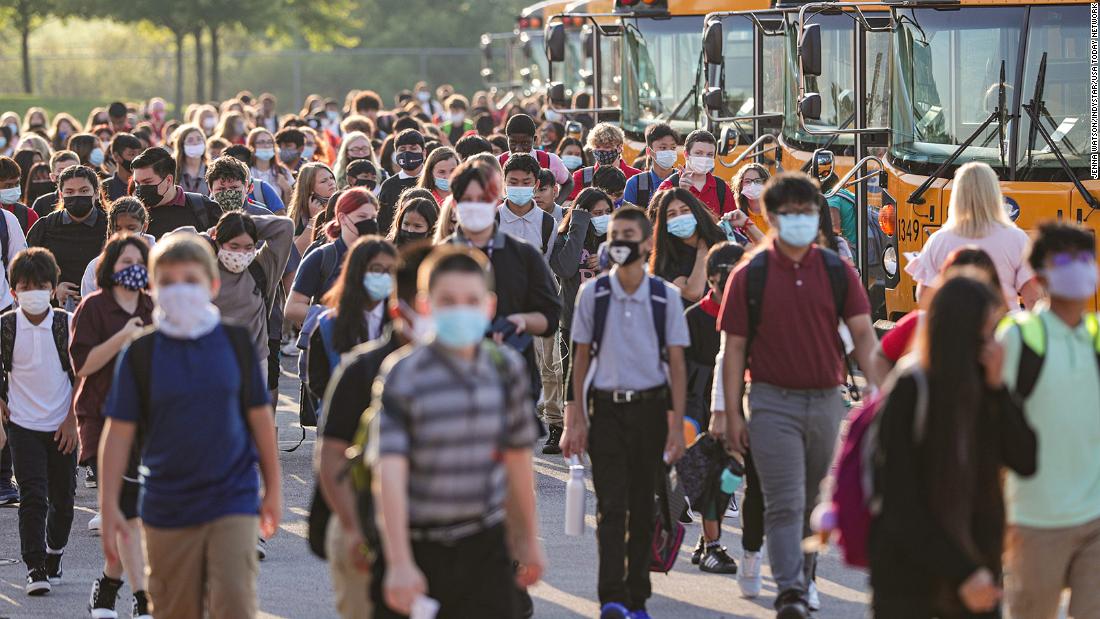 Some schools in Mississippi, Indiana, and Georgia have already been forced to return to virtual. Some are hoping to return to in-person learning when case numbers drop.

This week alone, two Atlanta-area elementary schools sent some or all students home for virtual learning. Kemp Primary School in Clayton County said will “operate in a virtual learning environment for the remainder of the week,” as a precaution. And fifth graders at East Side Elementary in Cobb County have also been sent home and won’t return to in-person learning until at least August 23.

“This morning, based on our district protocols and at the guidance of the Department of Public Health in coordination with district leaders, we’ve had to make the difficult decision to have our 5th-grade classes move to virtual learning due to the ongoing COVID-19 pandemic and high positive case numbers,” according to a district email sent to parents and obtained by CNN.

Two other Clayton County Schools, Pointe South Middle School and North Clayton High School, had already started the year off virtually due to a number of staff members having to quarantine.

The Glascock County Consolidated School in Gibson, Georgia, will continue virtually until at least August 20 after Covid-19 case rates “increased dramatically” in the community, according to an announcement by the school. The school said it had “high hopes” for a normal year, but within the first week of school nine students and four staff members tested positive and 99 students and 11 staff had to be quarantined.

“This temporary transition to virtual/at-home learning will allow the existing Covid-19 quarantines to expire and allow time for the spread of Covid-19 to slow,” the announcement read. “In addition, this period will provide time to implement enhanced mitigation measures and reinstate a hybrid instructional model for the remainder of the fall semester.”

In Indiana, Scott County School District 1 told parents on Tuesday that “due to the high rate of positive cases and extremely high rate of student in quarantine,” the district would switch to in-person learning on Wednesday, according to the district’s Facebook page. The district said it hoped to return to in-person schooling on August 23.

Several schools in Lamar County, Mississippi, switched to virtual learning before the county’s school board voted to switch to a hybrid model to help combat rising cases. Superintendent Steven Hampton proposed the hybrid schedule during a board meeting on Monday, saying while he believes face-to-face learning is best, a hybrid model would help avoid having all of the schools be virtual.

“Face-to-face learning is the best way for our children to learn but I just don’t feel like it’s safe,” Hampton said.

Oak Grove Middle School reported some of the highest numbers in Lamar County, with 44 students testing positive during the week of August 2-6. Mississippi is one of many states seeing climbing Covid-19 rates. There were no intensive care beds available in the top-tier state hospitals on Monday and 200 people were waiting in emergency rooms for hospital beds, according to State Health Officer Thomas Dobbs.
Cases have also been increasing in schools in the state. More than 1,300 students, teachers and staff in Mississippi schools have tested positive for Covid since the start of the school year, according to the state’s health department. More than 4,000 students were quarantined and almost 800 students tested positive for Covid-19 from August 2 to August 6, according to the data.
Mississippi Gov. Tate Reeves has left mask mandates up to local jurisdictions. CNN affiliate WAPT reported that Reeves recently called the change in mask guidance from the US Centers for Disease Control and Prevention “foolish and harmful” in a recent speech, saying “it has nothing to do with rational science.”

Some schools in the state are mandating masks, and others are not. But the 80 outbreaks in the state’s 342 schools led some districts to change policies just as the school year is beginning. On Monday, the Rankin County School District reversed its policy to require masks.

“As you know, our hopes were to remain in school while ‘highly recommending masks’ and utilizing other prevention strategies. However, the number of positive cases and quarantines of students and employees has become a concern after just two days of school opening,” the district said in a statement posted on its website.

The district says it will reevaluate the situation on August 25 to see if it can “go back to ‘recommending’ masks at that point.”

“While we know this will not be a popular decision, please understand the difficulty of the situation,” the district said. “We must base this decision on keeping our students and employees safe and keeping the schools open.”

The Pearl River County School District revised its plans this week to require masks in school for students 6 and older. The district will reevaluate on August 25 as well.
Missouri pediatricians called on schools in the state to implement mask mandates this week. The Missouri Chapter of the American Academy of Pediatrics echoed recommendations from the CDC and the American Academy of Pediatrics, saying it encourages that “anyone over the age of 2, regardless of vaccination status, should be masked indoors, including in the school setting.”
“It is critical that we continue to place layers of protection around children as the pandemic continues,” said Dr. Kristin Sohl, the chapter’s president and a pediatrician, in a statement. “Children can, in fact, get COVID-19; they do get sick, and more of them are being hospitalized for treatment. Implementing mitigation strategies such as masking, vaccination, testing and proper cleaning is key to keeping our school communities safe.”