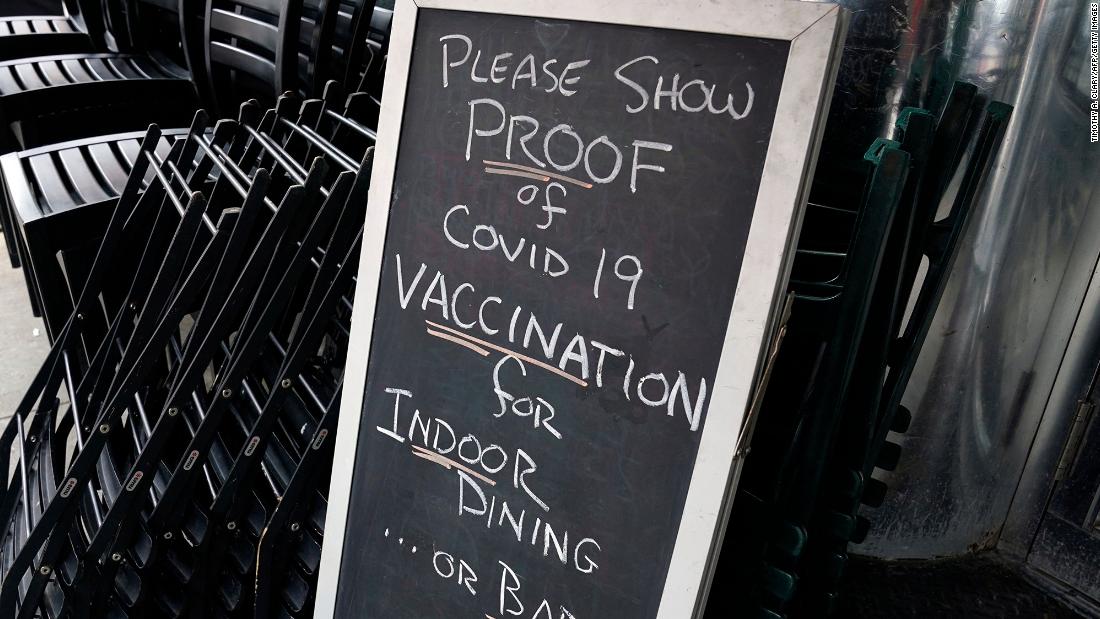 Earlier this month, the city announced a new rule requiring people to show proof of vaccination against Covid-19 before dining indoors, visiting a fitness center or going to an indoor entertainment venue. Anyone who works in the impacted businesses must also be vaccinated. The rule went into effect this week, and the city plans to start enforcing it on September 13.

“This vaccine mandate is arbitrary and capricious due to the fact that it targets certain establishments but not others,” wrote the plaintiffs, led by a group called the Independent Restaurant Owners Association Rescue, in a suit filed Tuesday. They said that the rule prevents people who choose not to be vaccinated from doing their jobs, and that it infringes on their religious freedom. They are seeking a permanent injunction against the order.

In response to a question asked about the lawsuit during a press conference on Wednesday, Mayor de Blasio said that he has “tremendous confidence that we’re in a very strong legal position,” with regards to the order, noting that he’d keep comments limited when discussing a lawsuit.

“We must get more people vaccinated,” he said. Using strategic methods to boost vaccination rates, especially among young people, “is mission critical,” to stopping the spread of the Delta variant, he said.
Across the city, 57% of residents and 68% of adults are fully vaccinated, according to NYC data, which also shows that cases of Covid-19 have spiked since early July.
Experts have warned that in the United States, cases will continue to grow as long as large segments of the country remain unvaccinated. The Centers for Disease Control and Prevention says Covid-19 vaccines are safe and effective, and recommends that eligible people get vaccinated.
New York City is not the only place requiring proof of vaccination for certain activities. San Francisco plans to put a similar rule into place on Friday, and others are considering their options. And France’s parliament recently passed a law that requires a “health pass” showing proof of vaccination or a negative PCR test in order to enter restaurants, bars and for travel on long-distance trains and planes.

Restaurant groups and owners had mixed feelings when the New York City mandate was announced earlier this month.

Some restaurants told CNN Business at the time that they welcomed the move, saying it would help level the playing field among restaurants and provide protection to employees and customers.