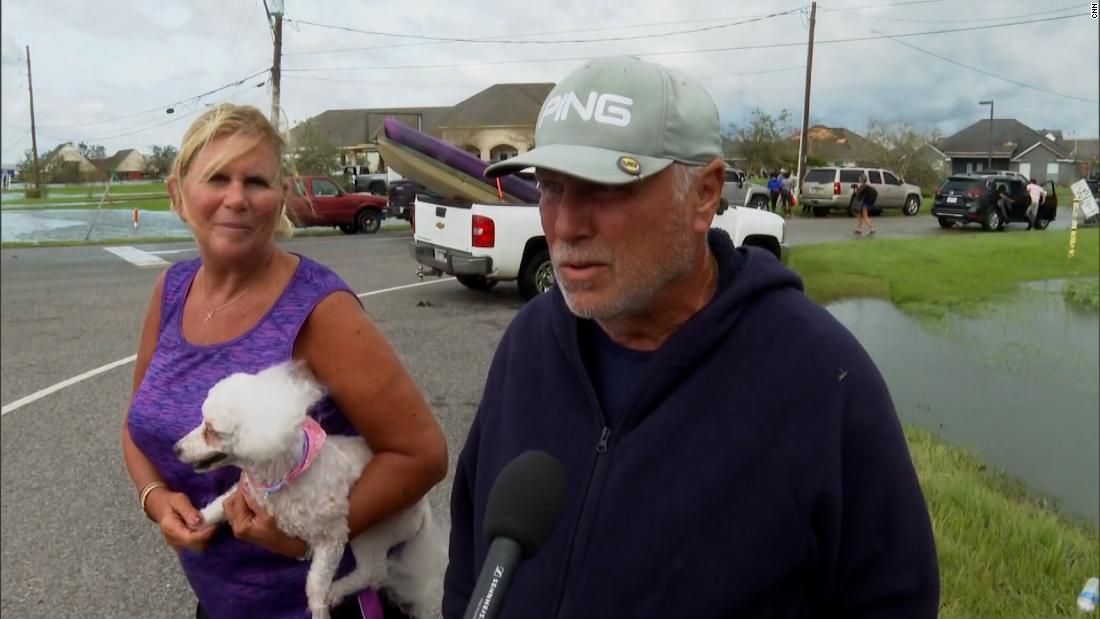 Ida slammed the Gulf Coast on Sunday, leaving at least one person dead and more than 1 million without power. The storm also came on the 16th anniversary of Hurricane Katrina, which devastated the region in 2005.

Trucks drove through water Monday as the small town just west of New Orleans woke up to pockets of its community still submerged.

Sean Eppinette told CNN he and a team of rescuers helped eight to 10 people in three different neighborhoods of LaPlace on Monday morning. Strong winds along with downed power lines and trees prevented them from rescuing people Sunday, Eppinette said.

“People lost everything they have. It’s kind of a sad day,” he said. “I don’t think many people evacuated. The water’s just going to sit. It’s not going anywhere.”

Don Dottolo, a LaPlace resident, said Sunday night was rough for him and his wife, Karen.

“It was more than I thought it was going to be wind-wise, rain, and of course, I expected the water. I can deal with the water,” he said.

Karen Dottolo said the water was deeper than expected. It started coming into their home when it got dark.

“We were afraid for a little while because it was coming up the stairs,” she said.

The couple told CNN they lived through multiple hurricanes, including Hurricane Andrew in 1992.

“That was scary, but that was 10-minutes scary,” Don Dottolo said. “This was hours of agony.”

Man hid in attic with 4 dogs

Gavin Goins Jr. was in his truck charging his phone Sunday when the water began to rise.

“Next thing you know I looked down and I see the water where it is on my truck and where it is to my door,” he said. “So I ran inside and it just started kind of gushing in.”

Goins lives in a one-story home, where he says the water rose so quickly it became knee-level faster than expected.

“I didn’t know if it was going to stay there or rise, so I just went up to the attic,” he said. “It didn’t get too much higher than that, but it was scary. It came in all at once.”

It was a long night for Goins and his four dogs trying to get out of the water, he said.

By Monday morning, he was walking around his LaPlace neighborhood with the youngest of his dogs to seek help.

Couple feared storm would blow off their roof

Ronnie and Debbie Greco described Sunday night as a nightmare.

“It was horrible. I’ve never had wind shake the house the way it did,” Debbie Greco said. “We had 4 feet of water that came inside and then after a couple of hours, the ceiling in my house started caving in.”

The couple told CNN when the storm first came in, they were prepared with flashlights and a brand-new $12,000 generator to power their home. An electrician told them they could leave everything on unless the water rose to the height of the electrical outlet.

Once the water reached the outlet, Ronnie said they opened their door, and that’s when all the wind funneled in.

“It was like sitting through an F-0 tornado for about four hours, five hours,” he said.

Ronnie said he and his wife have lived through many storms, including Hurricane Isaac in 2012. He said Ida was much worse and that he plans to evacuate next time.

“I’m not going to stay through another (Category) 4 again at home, I’ll tell you that much. I lived here all my life, so we’ve been through all the storms,” he said. “They expected it to come and be bad, but we didn’t expect it to get this close to LaPlace. It wasn’t supposed to be this close, so I’m not going to take that chance again, not with a family.”