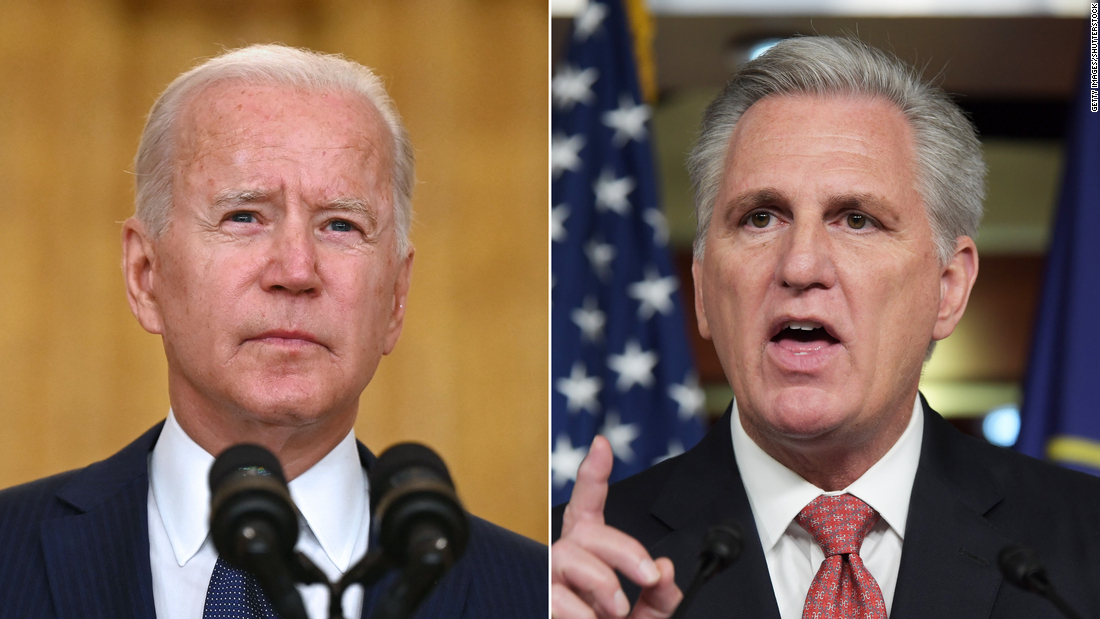 While a growing chorus of rank-and-file Republicans have called for Biden’s resignation or impeachment over the administration’s disastrous exit from Afghanistan, key leaders and others in the party have struck a more measured tone for the moment.
House Minority Leader Kevin McCarthy even pushed back against some of his members during a private conference call Thursday night, suggesting that the demands for Biden’s immediate ouster are counterproductive and saying the focus right now needs to be on getting Americans out of Afghanistan safely. But he also promised to pressure the administration.

“Promise you there is going to be a reckoning,” McCarthy, who spoke to Biden by phone on Thursday, told members on the GOP conference call, according to sources. “We are going to hold every single person accountable.”

Republicans across the board have been eager to keep the chaotic withdrawal in the spotlight and believe it will be a permanent stain on Biden’s presidency. But GOP leaders know that getting too political too quickly after Thursday’s attacks risks looking craven and disrespectful of the 13 US troops who lost their lives, with flags still being flown at half-staff and the possibility that Biden will travel to Delaware’s Dover Air Force Base whenever the fallen soldiers’ remains are returned.

With Republicans in the minority, but only five seats away from winning back the House next year, McCarthy has his eyes on the long game as opposed to trying to score short-term political points. But it’s a tough balancing act for the California Republican, who faces an increasingly agitated right flank.

Even one of McCarthy’s top deputies lit into Biden, calling him “unfit” to serve as President.

“Joe Biden has blood on his hands,” Rep. Elise Stefanik of New York, the no. 3 House Republican, tweeted shortly after reports surfaced of casualties from the airport explosions. “This horrific national security and humanitarian disaster is solely the result of Joe Biden’s weak and incompetent leadership. He is unfit to be Commander-in-Chief.”

Even before the airport attack, Republicans had been vowing to investigate Biden’s messy withdrawal from Afghanistan if they seize back power next year, with some lawmakers floating the idea of a Select Committee on Afghanistan.

In the minority, there is far less that Republicans can do to pressure the White House. For now, though, they are asking for information from the administration, firing off letters and taking steps that would help with future probes. And with some Democrats openly critical of the administration and joining in on GOP calls to extend the August 31 withdrawal date, Republicans see potential areas for bipartisanship.

Rep. Devin Nunes of California, the top Republican on the House Intelligence Committee, informed lawmakers during Thursday’s call that he sent a letter to the Office of the Director of National Intelligence requesting document preservation, according to two sources on the call. And Rep. Michael McCaul of Texas, the top Republican on the House Foreign Affairs Committee, also called for document preservation so that the House can conduct oversight and investigations, another source told CNN.

But Indiana Rep. Jackie Walorski said during the conference call that investigations are not enough. A number of lawmakers on the call repeated their admonitions for Biden or other administration officials to resign, according to sources.

Rep. Tom Rice of South Carolina, one of the 10 House Republicans who voted to impeach Donald Trump for inciting the January 6 insurrection, also called for Biden to step down.

“Do the American people a favor. Resign and turn the job over to someone who can handle it,” Rice said in a statement.

As many in the GOP were quick to escalate their criticism of Biden on Thursday, Sen. Kevin Cramer of North Dakota struck a different tone.

“While it may be tempting to some to use this moment to score political points, now is not the time for that,” he tweeted. “My fellow Americans: let’s gather together, mourn the fallen, comfort those the hurting, and pray for peace, leadership, and safety.”

And Senate Minority Leader Mitch McConnell didn’t even mention Biden by name in his statement, instead focusing his response on praising the “heroic” work of service members, offering sympathy for the troops and Afghans who lost their lives, and raising concerns about terrorism.

“This murderous attack offers the clearest possible reminder that terrorists will not stop fighting the United States just because our politicians grow tired of fighting them,” the Kentucky Republican said. “I remain concerned that terrorists worldwide will be emboldened by our retreat, by this attack, and by the establishment of a radical Islamic terror state in Afghanistan.”

Despite the House only being in session for two days this week, Republicans held a litany of news conferences on Afghanistan, while McCarthy will hold another one on Friday — his second of the week.

McCarthy has urged Speaker Nancy Pelosi to bring Congress back into session early so that they “can be briefed thoroughly and comprehensively by the Biden Administration” before the August 31 deadline. He is also calling for a floor vote on GOP legislation that would limit the ability of the Pentagon to pull out forces out of Afghanistan until the evacuation is complete.

Democratic leaders in Congress said they were monitoring the situation, advocated for securing the airport to help Americans and Afghan allies evacuate, and pushed back on the Republicans’ criticism.

“Right now, American heroes are risking & giving their lives to execute an extraordinarily dangerous evacuation, & the Minority Leader wants to defund the mission & tie the Commander in Chief’s hands in the middle of the most dangerous days of the operation,” tweeted Drew Hamill, Pelosi’s deputy chief of staff, referring to McCarthy. “What’s not going to help evacuate American citizens is more empty stunts & distraction from the Minority Leader who sat idly by as President Trump proudly negotiated with the Taliban.”