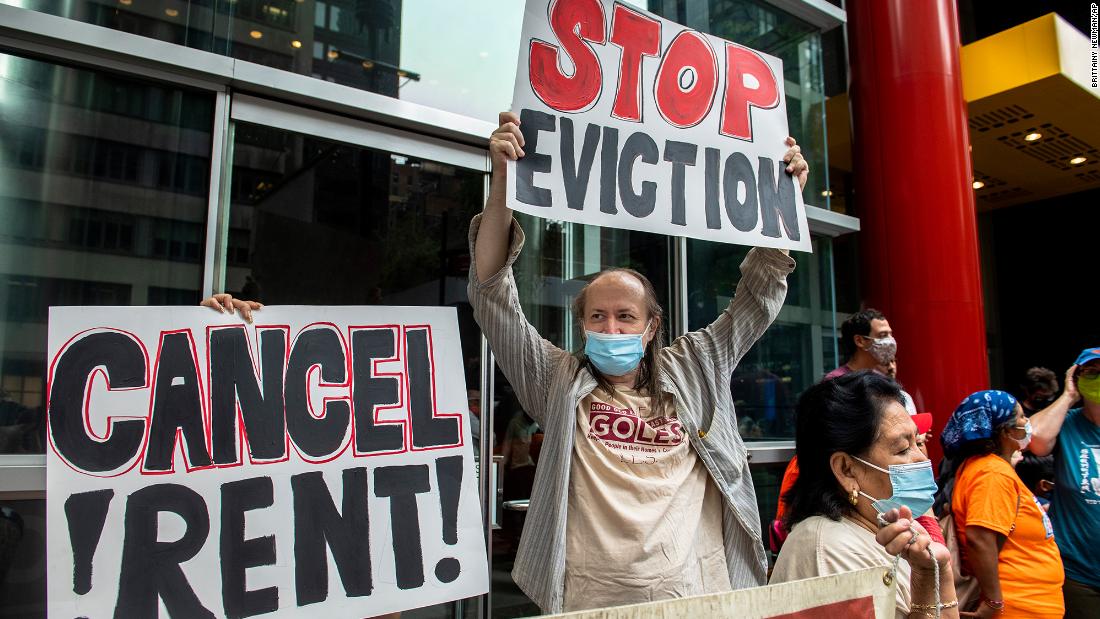 “I’m the happiest guy in the world,” said Leonard.

With an eviction complaint filed against him in April, the moratorium — put in place by the Centers for Disease Control and Prevention last September — was all that was keeping him in his home.

Leonard has an application pending to get some of the $46 billion in federal rent relief that has been set aside. He had hoped the aid would come in time for him to pay his back rent of nearly $6,000. But the money did not arrive before the first eviction ban ended.

“I chewed my fingernails down until they were bleeding,” Leonard said of the days he was not protected. “I was nervous waiting for that sheriff’s knock.”

The Biden administration’s extension of the eviction moratorium in areas with high rates of coronavirus transmission, including where Leonard lives in Florida, will change his life entirely, he said.

The extension will give him time to get rent relief money to his landlord and secure an income-based retirement home where he can afford to live on his fixed income.

“I’m going to focus on the blessing that I have a roof over my head a little bit longer,” he said. “There are millions of us. My heart isn’t bleeding anymore for the single moms and the people with little kids who have to pawn everything to keep them from getting evicted. They are protected, too.”

Who is now protected?

Unlike the previous ban, the new protection will be more limited, targeting areas hardest hit by the coronavirus. It will protect those in areas of the country with “high” or “substantial” transmission of Covid-19 based on the CDC’s tracking of the virus and will last until October 3.

As of August 1, more than 80% of US counties were classified as having “substantial” or “high” levels of community transmission. The Biden administration said those areas include 90% of renters.

Areas with lower transmission rates, including parts of Minnesota, Michigan, Maine and Vermont, are not covered. But the protection is county-based. Renters can look up their county at the CDC web site to see if they are covered by this new ban.

According to the order, if a county that is not covered on August 3 becomes an area with “substantial” or “high” levels of community transmission before the order expires, that area becomes covered on the day the county begins experiencing those higher levels of transmission.

On the other hand, counties currently covered will exit eviction protection by the order once the county no longer has “substantial” or “high” levels of transmission for 14 consecutive days.

To be protected by the ban, an eligible renter needs to provide a written declaration to their landlord. Any renter who previously submitted a declaration will remain covered, according to the new order. But any eviction that was completed while the former protection lapsed — on August 1, 2 or 3 — is not covered, as the order does not operate retroactively.

The clock has been reset

Housing advocates applauded the CDC’s renewed moratorium and expressed hope that state and local governments could accelerate the distribution of rental relief before October.

“This is a tremendous relief for millions of people who were on the cusp of losing their homes and, with them, their ability to stay safe during the pandemic,” said Diane Yentel, president and CEO of the National Low Income Housing Coalition.

With a small fraction of the $46 billion in emergency rent relief already distributed, and many programs now up and running, there is a race to get this money to those who need it by October in order to keep tenants housed and to make landlords whole.

“Now, the work of state and local governments to distribute emergency rental assistance to tenants in need becomes all the more critical. The President has given them the time that they and millions of renters needed — they must use it effectively and expedite assistance,” Yentel said. “The country is watching, and tenants and landlords are waiting.”

Meanwhile, landlord groups are frustrated. They expressed shock at the about-face after the administration said it likely did not have authority to extend the moratorium.

“Is it possible for the federal government to create any more uncertainty for renters and rental home property owners in this country?,” asked David Howard, executive director of the National Rental Home Council, an industry group of property owners.

“Shame on me for assuming the moratorium would not be extended after the president announced he has no legal authority to do so, nor was Congress able to pass legislation to do so. Meanwhile, rental home property owners have lost billions of dollars they will never recover,” he said.

Legal challenges to the new order are expected. In multiple lawsuits across the country, the New Civil Liberties Alliance, an organization aiming to protect constitutional freedoms, is arguing that the eviction moratorium exceeds the constitutional and statutory limits of the CDC’s authority.

Last month, the US Court of Appeals for the Eleventh Circuit rejected a request to put an end to the eviction moratorium issued by CDC. NCLA said it is now considering whether to appeal this ruling to the US Supreme Court or return to district court for trial.

“This is not how government should work, much less how ‘laws’ are written,” said Caleb Kruckenberg, litigation counsel at the NCLA. “If the CDC pushes forward, the courts must swiftly shut down the agency’s lawless actions.”

For the lawyers working on behalf of panicking tenants, the news of the extension is welcome. But, they say, the new order will likely prove confusing for judges, lawyers, tenants and landlords already beset by changing regulations, advancing court cases and varying levels of protection across the country.

The key will be making sure there is clarity about where the order applies, said Caitlin Cedfeldt, staff attorney at Legal Aid of Nebraska, and that tenants and defense lawyers know about it.

“But any sort of limitation on evictions is a good thing now,” Cedfeldt said. “It will buy my clients time they need to get their rental assistance processed.”

If you are looking for emergency rental assistance, there is a searchable list of available programs at the US Treasury and also lists managed by the National Low Income Housing Coalition and the National Housing Conference.