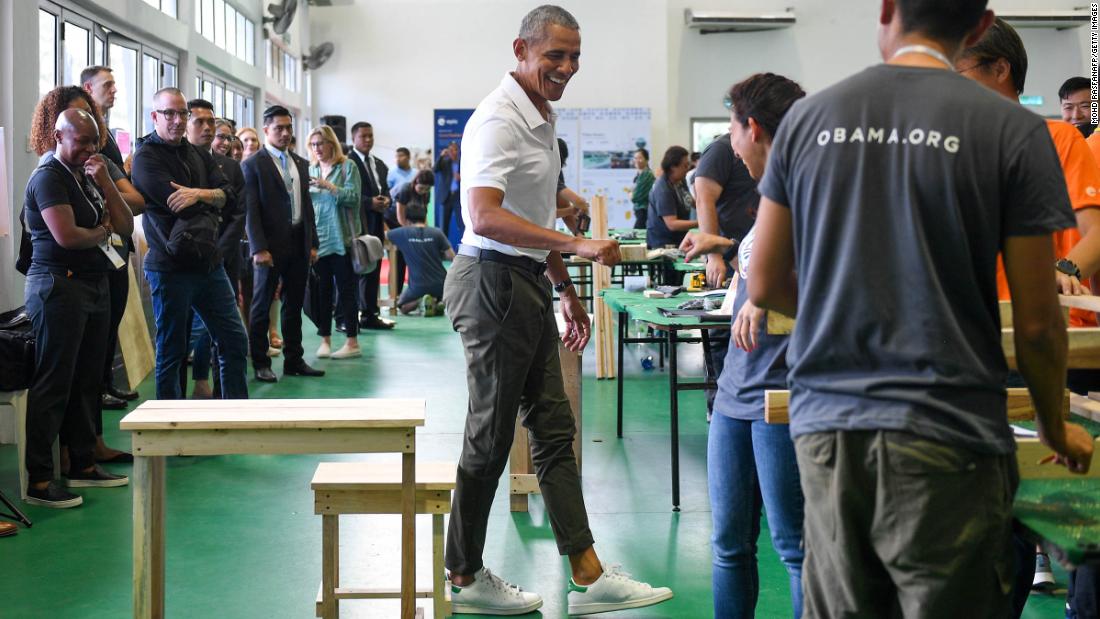 Delving into the archives of pop culture history, “Remember When?” is a series offering a nostalgic look at the celebrity outfits that defined their eras.

After years of unadventurous presidential-wear and routine dad dressing, all it took was a pair of tennis shoes to spark joy. Or maybe it was the sight of Barack Obama’s sockless ankles peeking out from beneath his slim olive-green chinos.

In any case, with today marking the former president’s 60th birthday, this throwback to the not-too-distant past serves as a timely reminder of they day we realized that Obama may — unlike almost every other man in history — end up being better dressed in his 60s than in the two decades preceding them.

It was a look that signaled a new sartorial direction for a post-presidential era, but the moment almost went unnoticed. Shot during a seemingly innocuous Obama Foundation side event in Kuala Lumpur, Malaysia, in 2019, the photos didn’t even go viral until they were revived online months later.

When they finally reemerged, however, Twitter swooned. The former president, then a sprightly 58, had rolled back the years. His look was “tasteful yet OG ballin’,” wrote one user. “This photo of Barack Obama wearing cropped chinos and Stan Smiths is the Friday gift I needed,” another commented.

Now, to be clear: the outfit was far from revolutionary. It wasn’t even on trend.

The crisp-white-kicks-and-polo look was a product of the early 2010s, while revived interest in Adidas’ Stan Smith range (named after a ’70s tennis player and discontinued in 2011, but later relaunched and dragged back to relevance in 2015 by the likes of David Beckham and designer Phoebe Philo) had peaked long ago.

Obama had been a cautious dresser during his time in office. He stuck to plain dark suits and sensible lace-up shoes. His most notable attempt to deviate from this strategy, “Tan Suit Gate,” saw him widely derided for misreading the gravity of the situation. Never again would he look so summery at a press conference on US military action in Syria.

Off-duty, meanwhile, he toed the line between Gen X and boomer. Choices were often inoffensive, but he was prone to questionable denim, like the “mom jeans” he infamously wore to throw first pitch at 2009’s MLB All-Star Game.

“I didn’t want to feel confined while I was pitching,” he later explained to Ryan Seacrest in a radio interview. “I’ve paid my penance for that. I got whacked pretty good.”

He clearly learned his lesson. Since leaving office, Obama has impressed in a custom Rag & Bone bomber jacket embroidered with the number “44,” (just in case anyone behind him at the Duke-North Carolina NCAA game didn’t know which former president he was).

Then there was the sharp brown leather jacket he sported at the National Gallery of Art in Washington DC in 2017, and the black one he wore to the NBA finals two years later.

He even took his Stan Smiths out for another spin while recording a podcast series with Bruce Springsteen. And while his other sneaker of choice, tech-bros’ favorite Allbirds, has proven more divisive online, we should applaud any sexagenarian who is willing to shop sustainably.

So, the fuss over Obama’s Stan Smiths wasn’t just about a pair of shoes. It was about the belated style renaissance of a man liberated from ill-fitting jeans and the stuffy norms of presidential convention. A moment worthy of celebration.