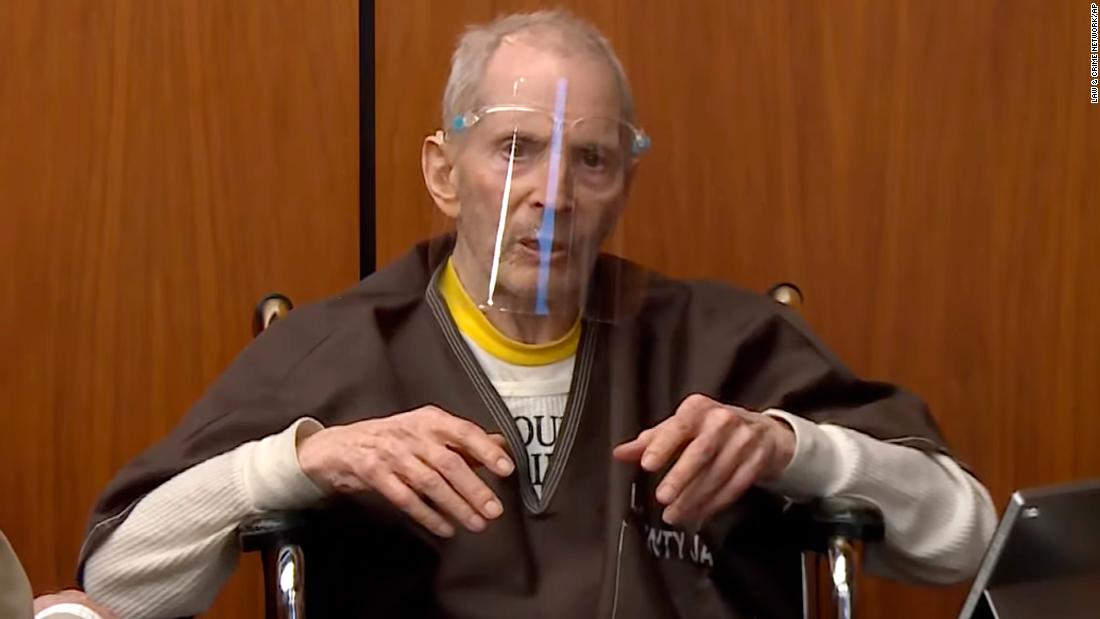 Durst, once again, denied killing Berman and said he did not know who killed her.

In the first hour and a half of testimony, Durst gave long, drawn-out answers when asked questions about his mother’s death, his relationship with his father and how he met Berman in the late 1960s. Prosecutors often objected and asked the judge not to allow Durst to answer in “narrative” form.

Durst, 78 and frail, was expected to testify last week, but the trial was adjourned Thursday after a person in the courtroom tested positive for Covid-19, the court said in a statement. Judge Mark Windham determined the trial would resume Monday with continued cross-examination of memory expert Dr. Elizabeth Loftus.

Durst is charged with first-degree murder in the 2000 death of Berman at her Beverly Hills home hours before she was set to talk to investigators about the mysterious disappearance of his first wife, Kathleen McCormack Durst, who was last seen in 1982.

Durst has long denied killing Berman, and his lawyer has said that he panicked and ran after finding her body. He has pleaded not guilty.

The trial began early last year but was suspended in March 2020 after just a few days because of the coronavirus pandemic. It finally resumed this May, and prosecutors rested their case last week after several months of testimony.

Durst’s expected testimony is just the latest chapter in an unusual life story that reached mass audiences through “The Jinx” miniseries in 2015.

He was arrested in New Orleans the night before the final episode of the show, making the finale must-see TV. And in its final moments, Durst went into the bathroom, apparently not realizing his microphone was still on, and made a series of comments that became infamous.

“There it is. You’re caught,” he said in a series of seemingly unrelated sentences. “He was right. I was wrong.”

“What the hell did I do? Killed them all, of course.”

The comments came across to audiences as a stunning confession. However, transcripts of the audio recording in court revealed that the quotes were spliced and edited to be in a different order and context, The New York Times has reported.

Durst’s health has deteriorated since then, and he looks and sounds frail in court. He is thin, bent-over and in a wheelchair and speaks in a whispery voice.

Earlier this week, Los Angeles County Superior Court Judge Mark Windham rejected Durst’s lawyers’ latest bid to delay or end the trial because of his health issues. Durst has bladder cancer and has undergone multiple surgeries, including the insertion of a shunt in his head to relieve pressure on his brain.

What to expect from his testimony

Testifying in one’s own defense is uncommon for murder defendants, but the tactic worked for Durst in a previous murder trial.

In 2003, an animated Durst testified he had fatally shot a neighbor, Morris Black, in self-defense and admitted he cut up his body with surgical precision and dumped it in Galveston Bay. He said he did so in a panic, while prosecutors said he wanted to steal the man’s identity and escape the investigation of his wife’s disappearance.

The Texas murder trial revealed more about Durst’s often eccentric behavior, including how he posed as a mute woman as he hid out in Galveston.

The jury in Texas accepted Durst’s self-defense assertion, acquitting him of murder.

Durst’s testimony is expected to last several days, and legal analysts caution that he needs to be careful with his words.

His testimony “could open the door to all types of prior bad conduct that he could be questioned about,” said CNN legal analyst Joey Jackson. “If the jury thinks he’s lying, being evasive or if he’s unsympathetic, a conviction is assured.”

The medical issues could also come into play.

“There is a still a slight chance of raising the sympathy of someone on the jury,” said Loyola Law School professor Stan Goldman.

But Jackson believes Durst needs to be careful about how jurors perceive his medical issues. “If he testifies and feigns sickness or incapacity, the jury will see right through it,” said Jackson.

“That’s if the judge changes his mind and determines Durst’s condition makes him unfit to testify at this time or in the foreseeable future,” Goldman said.

How we got here

Prosecutors allege that Durst shot Berman in the head from behind to stop her from incriminating him in Kathleen Durst’s disappearance in 1982. They say Durst confided to Berman that he had killed his wife, and that she helped him cover his tracks.

Lewin and Durst squared off in a New Orleans jail cell in 2015 after Durst agreed to an interview that would last three hours, without his lawyers present, making potentially damaging claims and lamenting his many physical ailments.

“My life expectancy is about five years,” the eccentric millionaire said in the 2015 interview.

There is little physical evidence in Berman’s nearly 20-year-old unsolved death. There are no eyewitnesses and no murder weapon.

One key piece of evidence is the so-called “cadaver” note, a cryptic letter sent to police with Berman’s address and the word “cadaver” in caps that led detectives to her body.

In “The Jinx,” Durst said the letter could have been sent only by Berman’s killer. Defense lawyers previously denied Durst wrote the note, and they tried to exclude from trial handwriting evidence about it.

But in a court filing late last year, lawyers for the real estate mogul reversed course and acknowledged that Durst penned the anonymous note. “This does not change the fact that Bob Durst did not kill Susan Berman,” DeGuerin said at the time.

Also in the documentary, filmmakers confronted Durst with another letter he once mailed Berman, with nearly identical handwriting to the “cadaver” note. In both, Beverly Hills was misspelled as “BEVERLEY.”

Lewin, in the interview with Durst, asked him, “Why would you think the killer would have left a note?”

“I’m gonna stay away from that,” Durst replied.