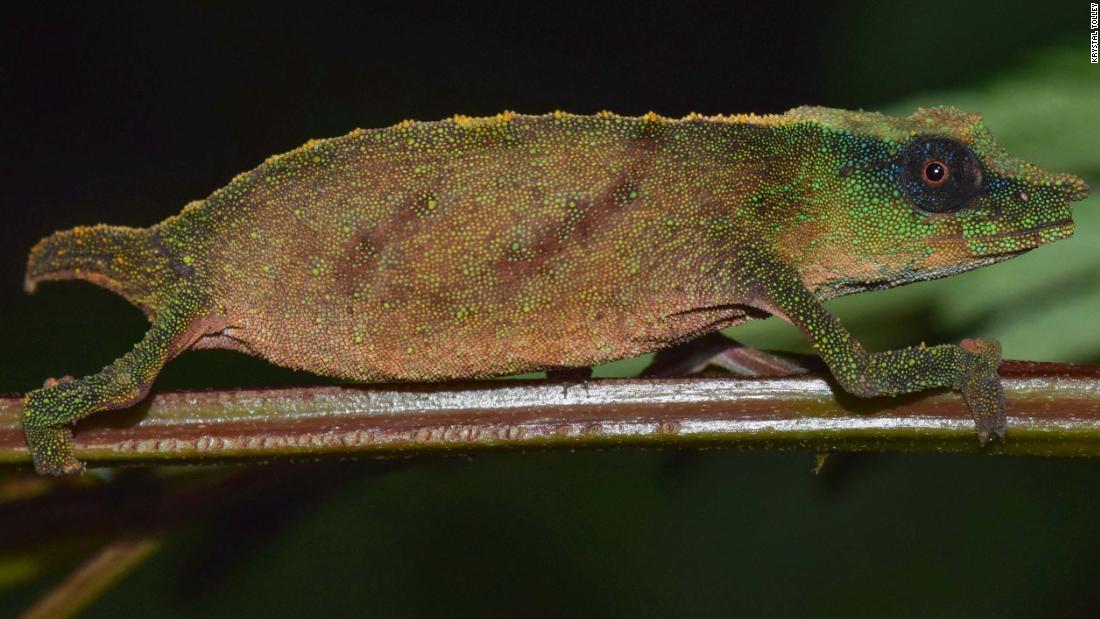 Up to only 5.5 centimeters (2.2 inches) long, the critically endangered Chapman’s pygmy chameleon (Rhampholeon chapmanorum) is native to the low-elevation rainforest of the Malawi Hills in southern Malawi, a country in southeastern Africa, according to a study published Monday in Oryx—The International Journal of Conservation.
First described by herpetologist and author Colin Tilbury in 1992, Chapman’s pygmy chameleon is one of the world’s rarest chameleons.
“They are mostly brown but they can change to quite beautiful blues and greens with little dots all over them and that’s probably a way of communicating with each other,” said the study’s lead author Krystal Tolley, a professor and research leader in the Leslie Hill Molecular Ecology Laboratory at the South African National Biodiversity Institute, in a statement. “Other chameleon species can be hysterical, hissing and biting, but pygmy chameleons are gentle and just beautiful.”
Chameleons’ extinction risk is much higher than the average of 15% for the reptile order they belong to, with 34% of chameleon species classified as threatened and 18% near threatened, the authors wrote. Most of the threatened species are forest specialists, which means they can only live in a specific type of environment.

When Tilbury first described pygmy chameleons in 1992, previous researchers noticed signs of substantial deforestation in Malawi Hills, wrote the authors of the current study. To protect the species from further harm, 37 Malawi Hills-based pygmy chameleons were released into a forest patch about 95 kilometers (59 miles) north in Mikundi, Malawi, in 1998, according to the study. When Tilbury assessed the release site in 2001 and 2012, chameleons were still there.
Because pygmy chameleons are intolerant of transformed areas and Tolley didn’t discover any pygmy chameleons during related assessment work in 2014, they were thought to have possibly become extinct. Her work led the International Union for Conservation of Nature to list the chameleons as critically endangered on its Red List of Threatened Species. Using historical (1984-1985) and recent (2019) Google Earth satellite imagery of the Malawi Hills and another geographical information system, the authors of the current study estimated about 80% of the Malawi Hills forest had been destroyed from 1984 to 2019.

At night on the trails of three accessible forest patches in 2016, the authors walked, using torchlights to find and record chameleons.

“The first one we found was in the transition zone on the forest edge, where there are some trees but mostly maize and cassava plants,” Tolley said. “When we found it we got goosebumps and just started jumping around. We didn’t know if we would get any more, but once we got into the forest there were plenty, although I don’t know how long that will last.”

The researchers found seven adult chameleons along a footpath just inside the first forest patch of Malawi Hills; 10 chameleons inside a site over 6 kilometers (4 miles) southwest of the first; and 21 adult chameleons plus 11 young and hatchlings inside the patch at Mikundi, the location of the 1998 release.

After snipping 2-millimeter-long (0.1-inch-long) tail clips from some adult chameleons, the authors did genetic analysis. The chameleons’ genetic diversity was normal in comparison to that of other chameleons and small-bodied reptile species, the authors found. But there were significant differences in genetic structure between populations in different areas, suggesting that humans fragmenting the forest patches had disrupted the breeding ability between chameleons on neighboring patches and therefore their gene flow — an impact that increases extinction risk due to fewer options for mates, the authors wrote.

However, the authors might have overestimated the amount of genetic diversity between populations by not accounting for the way that some DNA is inherited, said Eric Routman, a professor emeritus of biology at San Francisco State University, who wasn’t involved in the study.

“And even if they had lots of loci and good genetic estimates, they have no estimate of these genetic parameters before the habitat fragmentation, so they can’t attribute any genetic effect to deforestation,” Routman added via email. “If I had been reviewing this paper, I would have recommended major revisions to the manuscript. Essentially, the genetic part of their study is inconclusive.”

The authors think effects of deforestation on genetic diversity could take time to appear. But to prevent the chameleon species from reaching a point of no return, the rainforest loss requires immediate attention, Tolley said.

“Urgent conservation action is needed, including halting of forest destruction and recovery of habitat to promote connectivity. Although part of the Malawi Hills falls within a Key Biodiversity Area (Matandwe Forest Reserve), most of the forest falls outside the reserve boundary, and the effectiveness of the forest reserve is questionable, given that most of the destruction has been within its boundaries,” the authors wrote. “Although extending the reserve to encompass all the forest patches would be a first step, measures are needed to avert the destruction of the remaining patches.”

These efforts would be important also for any other species that possibly live among these chameleons, the authors wrote. And there could be more pygmy chameleons in the patches they weren’t able to explore, they said.

For the little creatures Polley described as gentle and beautiful, “both the planning and the recommended actions require strong leadership, personnel, stakeholder engagement, including with government departments, and sufficient funding to ensure success,” the authors added.