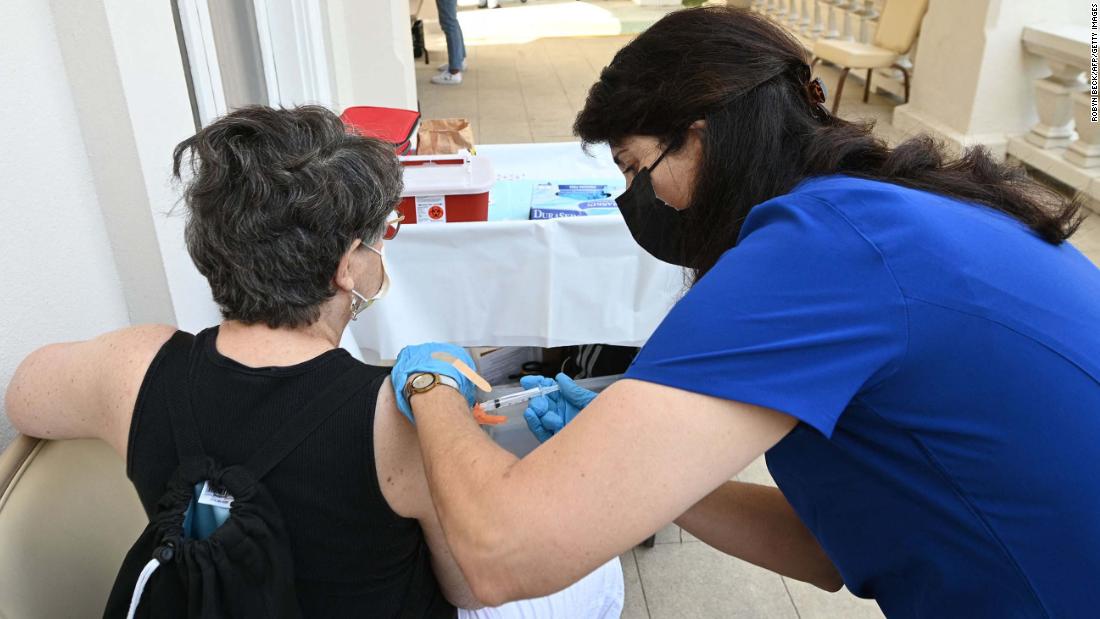 But boosters are unlikely to slow the agency’s work in considering full approval for Covid-19 vaccines or authorization of a vaccine for children.

“All three are priorities for us,” an FDA official told CNN. “We are working around the clock to make sure that all of the actions get done and the data gets reviewed in a timely manner, but also in a thorough and rigorous manner.”

Senior federal officials told CNN Friday full approval of Pfizer/BioNTech’s vaccine is “imminent,” but gave no firm date. FDA officials have said agency staffers are working as fast as they can to finalize approval.

Federal health officials are clear that Covid-19 vaccines are the FDA’s top priority, but the agency must gather more information for some pending decisions from vaccine manufacturers. It’s also got to get the paperwork just right, officials say.

The FDA relies on manufacturers to submit data when applying for an amended authorization or full licensure — and only then can the agency take action.

US health officials announced plans for offering Covid-19 booster doses to some starting the week of September 20. But those plans are subject to authorization from the FDA and signoff from the US Centers for Disease Control and Prevention.

So far, only Pfizer has submitted initial booster data to the FDA; the company said Phase 3 results evaluating the third dose are expected shortly.

At the same time it’s considering boosters, the FDA is also working with pharmaceutical companies Pfizer and BioNTech, Moderna, and Johnson & Johnson towards full approval– a process known as Biologics License Application or BLA.

Pfizer/BioNTech’s submission has been accepted for priority review by the FDA. Once it receives approval, the companies said, they also plan to seek approval of a booster dose for people 16 and older.

As for the other two companies with authorized vaccines in the United States, Moderna has begun submitting data for approval of its two-dose vaccine, and Johnson & Johnson has not yet submitted data for full approval, but expects to do so.

“I think that approval, at least for the Pfizer vaccine, is going to come very soon — probably by the end of the month or right around there,” McClellan, director of the Duke-Margolis Center for Health Policy at Duke University, told CNN’s Chris Cuomo this week.

“The agency’s trying not to cut corners on it, but it’s still going much faster than a usual approval process takes — instead of six months, just a couple of months,” McClellan said. He added that approvals for other Covid-19 vaccines will likely follow.

“There will be approvals coming along in the months ahead, in all likelihood, for the Moderna vaccine, the J&J vaccine, after that,” he said. “Hopefully that will add to the confidence that people have about the vaccines.”

Timelines for vaccines for younger children

Meanwhile, parents and pediatricians around the country are growing impatient for a vaccine for children younger than 12. Each of the vaccine makers has been testing their vaccines in younger age groups, but the results aren’t in yet, and the FDA recently requested additional data from the trials, shifting some timelines.

Pfizer has said it expects to have vaccine trial data on children ages 5 to 11 by the end of September, and the company could apply to have its vaccine authorized for those younger ages shortly after. The company also has said data for even younger children, ages 2 to 5, could be available shortly after.

Moderna, whose vaccine is currently available for people 18 and older, has applied with the FDA for authorization for adolescents ages 12 to 17 and is waiting for a response from the agency. The company expects to have vaccine trial data on younger children later this year or toward the beginning of 2022.

Johnson & Johnson has said that it has designed four late-stage studies on its vaccine for young children, modeled after its small trials with 16- and 17-year-olds. The company is in “active discussions with regulatory authorities regarding our development plan and trial designs,” and anticipates those late-stage trials will start in the fall.

“The timing of what we are saying with boosters today has absolutely nothing to do with the timing of when kids’ vaccinations will be available,” Walensky told CNN’s Kate Bolduan on Wednesday.

“I am a parent myself. I understand the importance of getting our younger kids vaccinated,” Walensky said. “But one is not slowing down the other by any stretch.”

US Surgeon General Dr. Vivek Murthy said on Thursday that the FDA will move quickly to thoroughly review each company’s trial data on vaccines for young children.

“The Covid-19 vaccine reviews are the top priority for the FDA,” Murthy told CNN’s Brianna Keilar. “As soon as they get the data from the companies and the trials are underway, they will review it. It is possible that we may have vaccines for under 12s before the end of the calendar year. That’s certainly what I’m hoping for. It’s certainly what we will work toward.”