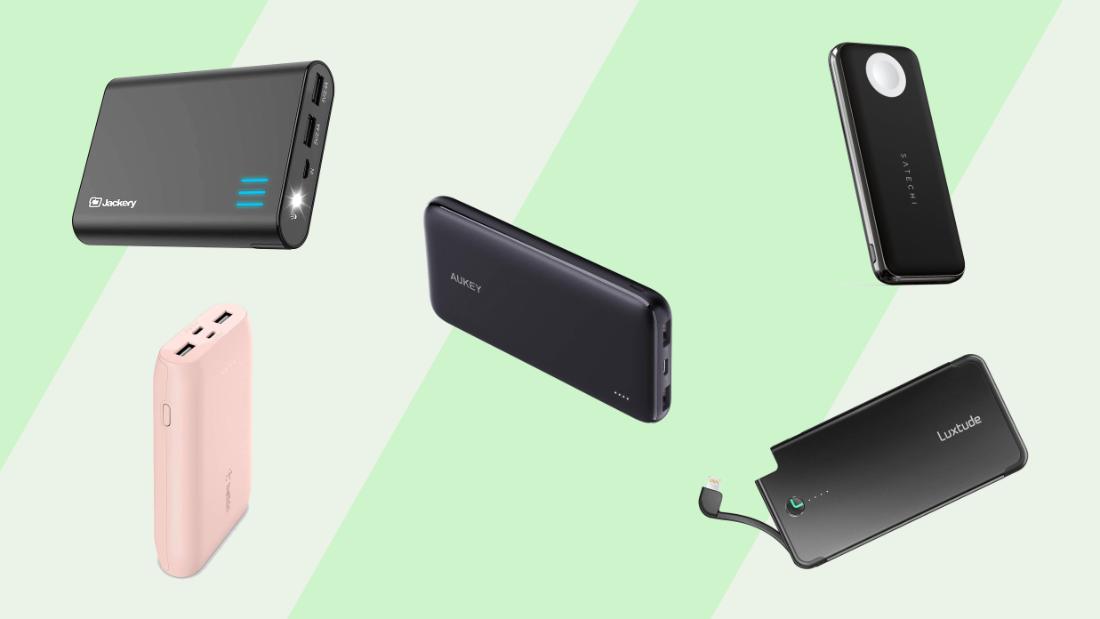 As vaccines roll out all around the globe, some may be finally thinking about traveling again. And in case you’ve forgotten, traveling often brings about long days for both you and your electronics. The best way to keep your devices charged throughout usage is by using a power bank, but it’s tough to figure out what kind of mobile chargers are approved by the Transportation Security Administration or Federal Aviation Administration so they won’t get taken away during security check-in.

All battery packs face very strict guidelines for air travel. Lithium-ion (rechargeable) batteries and portable batteries that contain them can only be packed in carry-on baggage. They’re limited to a rating of 100 watt hours (Wh) per battery. With airline approval, you can bring two larger spare batteries (up to 160 Wh).

We found the best battery packs that are within FAA regulations so you can keep your smartphone, tablet, laptop or headphones juiced up during long airplane rides. The TSA won’t take away any of the batteries listed below, so you can use them to keep your mobile devices charged and ready to go. So whether you need a boost to keep binge-watching your favorite series or keep up with calls before boarding, these portable chargers will have you covered.

This top-rated battery pack from Anker packs the most power you’re allowed to take on a flight. It features a 45-watt USB-C port to charge your laptop back to full battery and 15-watt USB ports to charge smartphones and other small devices. The extra battery itself charges quickly and will reach a full charge in less than three and a half hours. It comes with a 60-watt USB-C wall charger and USB-C cable as well so you’re equipped with everything you’d need. It’s on the pricier side, but the speed at which it can repower your devices and the included wall charger and charging cable make the battery worth the splurge.

We like this pick from Anker because of the low price and slim design. It’s super lightweight and easy to slip into a purse, backpack or pocket. It features trickle charging mode so you’re able to safely charge smaller devices like your earbuds. You’ll need to get your own charging cables, as the only one included with the battery is a Micro USB to recharge the battery (it’s also rechargeable via the USB-C input port, but you’ll need your own cable). It’ll take 5.5 hours to recharge if you use a 10-watt wall charger. Overall, the slim design makes this a great pick for super-convenient portability.

This portable charger has 4.5 out of 5 stars in reviews on Amazon. It features a 5,000mAh battery with a built-in Apple MFi-certified Lightning charging cable so you won’t have to worry about carrying extra wires with you to charge your Apple device on the go. The design is super thin (0.31 inches, to be exact), so it’s perfect for quick and easy storage and holding while in use. It has a 5V max output for safe charging and can get your iPhone back to 50% battery in 30 minutes. We like it a lot for the super-slim profile and built-in Lightning cable for a super-convenient charge.

The PowerCore Fusion doubles as both a wall charger and a portable battery. It’s a perfect option if you’re looking to travel light, as you’ll have power on the go and an easy wall plug once you arrive at your destination. It’s pretty small, measuring 2.7 inches by 1.2 inches, which makes it easy to toss in your carry-on. The portable battery charges via the wall plug, which also helps to reduce your cable clutter. It’ll charge your phone up to three times, so it’s perfect if you’re looking for quick boosts to your battery.

This power bank is aptly named, as it makes power on the go a breeze in a pocket-size device. It features two universal USB-A ports for charging up to two devices at once. It features a 10,000mAh battery to provide up to 70 additional hours of video playback, so it’s a solid option if you love to stream your favorite shows on the go. It will deliver up to a 5-volt charge to smartwatches and fitness bands, earbuds, action cameras and other Bluetooth-enabled devices. It has a quick recharge using the included Micro USB cable.

Powerstation Plus XL Wireless With PD

This 6,000mAh battery pack can charge your smartphone up to two times. It has two dual charging ports so you can power more than one device at a time while on the go. You can use it to charge your smartphone, headphones, speakers and tablets. The LED indicator on the side of the power bank will let you know how much power is left in the battery so you know when it’s time to plug in the power brick. The bank itself charges via an included Micro USB cable.

This pick from Belkin has a 10,000mAh battery to give you an extra 36 hours of additional battery life for your smartphone. It features two USB-A ports, a USB-C port and a Micro USB input port. It can deliver up to a 12-watt charge from the USB-A port when a single device is plugged in for a quick battery boost. A total of 15 watts is shared when all ports are being used. It’s available in three colors so you can choose a color to match your other accessories.

Zendure’s portable charger has a sleek and high-tech look while packing a 10,000mAh battery to charge your smartphone up to three times. It’s made of a crushproof composite material, so it’s safe from bumps and knocks if you toss it in your carry-on bag. It has USB-A and USB-C ports, and the battery pack itself charges through a Micro USB cable. Plus, we like the eye-catching design and color options.

Available in black or white, Aukey’s power bank has a 10,000mAh battery to keep your devices charged through the two USB-A ports and single USB-C input/output port. It’s slim in design and about the same size as your phone, so it’ll easily fit in pockets and bags. You can use the two USB-A ports to charge multiple devices at once, and the output maxes out at 12 watts for compatible devices.

This is a wireless power bank, which is great to use while traveling since it eliminates the need for extra wires if you’re using Qi-enabled devices. As a bonus, there’s a designated charger for your Apple Watch. You can fast-charge your iPad or other tablet that isn’t Qi-enabled using the USB-C PD port that maxes output at 18 watts for compatible devices. The 10,000mAh capacity can charge an iPhone 11 up to two times to keep you powered throughout your travels.