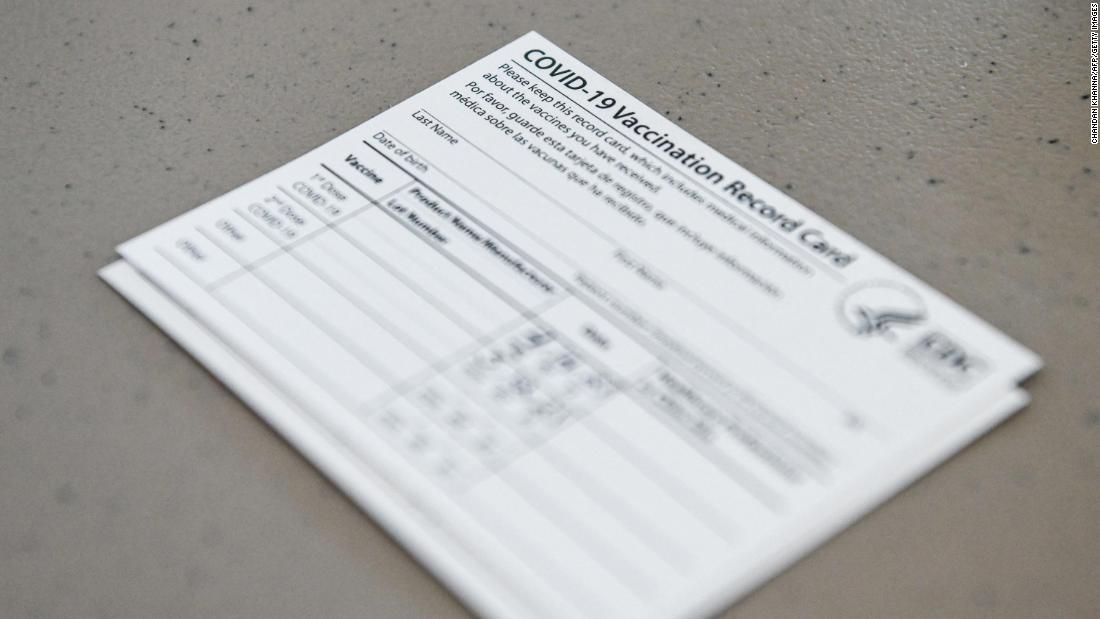 Tangtang Zhao, 34, allegedly sold 125 Covid-19 vaccination cards from the US Centers for Disease Control and Prevention to 11 different buyers for about $10 a card in March and April, the department said.

Zhao, who worked as a pharmacist during that time, was indicted on 12 counts of theft of government property, the release added.

“Knowingly selling COVID vaccination cards to unvaccinated individuals puts millions of Americans at risk of serious injury or death,” Special Agent in Charge Emmerson Buie Jr., with the FBI’s Chicago Field Office, said in a statement. “To put such a small price on the safety of our nation is not only an insult to those who are doing their part in the fight to stop COVID-19, but a federal crime with serious consequences.”

Zhao’s defense attorney, Gal Pissetzky, entered a not guilty plea on his client’s behalf during a Tuesday arraignment.

Zhao’s biggest sale was $176.70 on April 2 to a buyer who paid for 17 cards, according to the indictment. In total, Zhao made more than $1,200 between March and April, the indictment shows.

During the arraignment, Zhao was ordered by US Magistrate Judge Sheila M. Finnegan to inform his employer that he was indicted on a charge of selling certified vaccination cards that he received from his job.

Pissetzky, Zhao’s attorney, said he “will certainly be fired if he discloses the charges to his employer.”

“Certainly, unfortunately, Mr. Zhao will lose his employment and I’m not sure if he’ll be able to gain new employment because he is a pharmacist,” Pissetzky said.

“He might be able to do some other kind of work,” the judge replied.

Finnegan agreed to release Zhao on a $4,500 unsecured bond and gave him seven days to inform his employer.

If convicted, Zhao faces up to 10 years in prison for each count, according to the Justice Department.

The Justice Department filed another criminal fraud case last month related to Covid-19 vaccination record cards.
In July, a licensed naturopathic doctor in California was charged with selling immunization pellets to patients under the guise that they would create Covid-19 antibodies and instructing customers how to fill out the CDC vaccine card to make it look like they had received the Moderna vaccine.