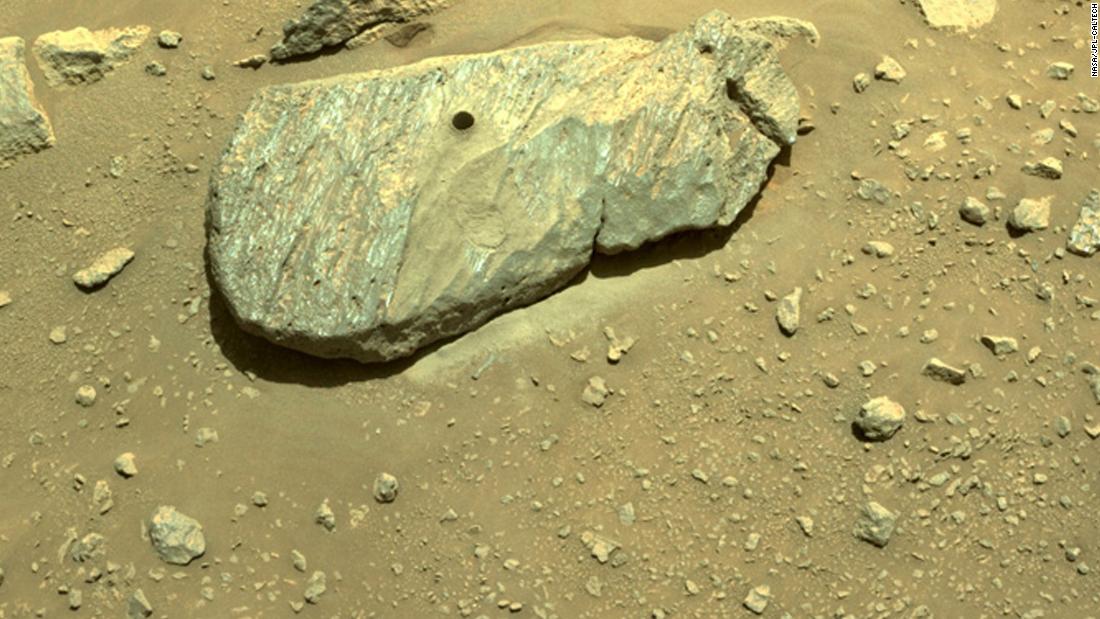 New images with better lighting reveal that the rover did, in fact, successfully collect a Martian rock sample last week. Now, the rover is processing and sealing the sample tube. It’s the first Mars rock core sample to be stowed on the rover.

It’s one of more than 30 Martian samples that will be returned to Earth by future missions in the early 2030s — and they could reveal if microbial life ever existed on Mars.

The Perseverance rover drilled into a Martian rock on September 2, but the rover’s team on Earth wanted better images to make sure the sample was safely in the tube. Initial images and data sent back by the rover suggested an intact sample was inside the tube after Perseverance drilled into a rock selected by the mission’s science team.

After those images were taken, the rover vibrated the drill bit and tube for five one-second bursts to clear both of any residual material from outside of the tube. It’s possible that this caused the sample to slide down further inside the tube, making it difficult to see.

The next images taken after this were “inconclusive due to poor sunlight conditions,” according to the agency. Perseverance spent the next two days using its cameras to take more images under better lighting conditions before conducting the next steps of the sampling process.

The extra step of taking additional images before sealing and stowing the sample tube was added after Perseverance attempted to drill into another rock target on August 5. During that attempt, the rock crumbled and there was no sample present in the tube once it was stowed.

“The project got its first cored rock under its belt, and that’s a phenomenal accomplishment,” said Jennifer Trosper, project manager for the mission at NASA’s Jet Propulsion Laboratory in Pasadena, California, in a statement. “The team determined a location, and selected and cored a viable and scientifically valuable rock. We did what we came to do.”

The rover uses a rotary-percussive drill and hollow coring bit to drill into rocks and collect samples just a bit thicker than a pencil. This sampling system is located on the end of the rover’s 7-foot-long (2-meter-long) robotic arm.

Perseverance is currently exploring the Citadelle location in Jezero Crater, which — billions of years ago — was once the site of an ancient lake. The rover’s specific target was a rock called Rochette, which is about the size of a briefcase and is part of a half-mile ridgeline of rock outcrops and boulders.

The Ingenuity helicopter has been busy as well, acting as an aerial scout for the rover’s future adventures. The little chopper successfully completed its 13th flight on Mars over the weekend.

It flew at a slightly slower speed of 7.3 miles per hour (3.3 meters per second) over the South Seítah region and took a multitude of photos.

The helicopter’s 12th flight also concerned this region, which could be of valuable interest to the rover’s science team. The 13th flight saw Ingenuity flying in a different direction over South Seítah to capture a different perspective.

During the 12th flight, scientists were intrigued by a particular ridgeline and its rock outcrops. So Ingenuity flew at a lower altitude than usual, skimming 26 feet (8 meters) above the area rather than 33 feet (10 meters).

Now, the science team has images showing this geologically intriguing area from the northeast as well as the southwest. Together, the images could help Perseverance’s team determine where the rover should drive next — and where to collect more samples.