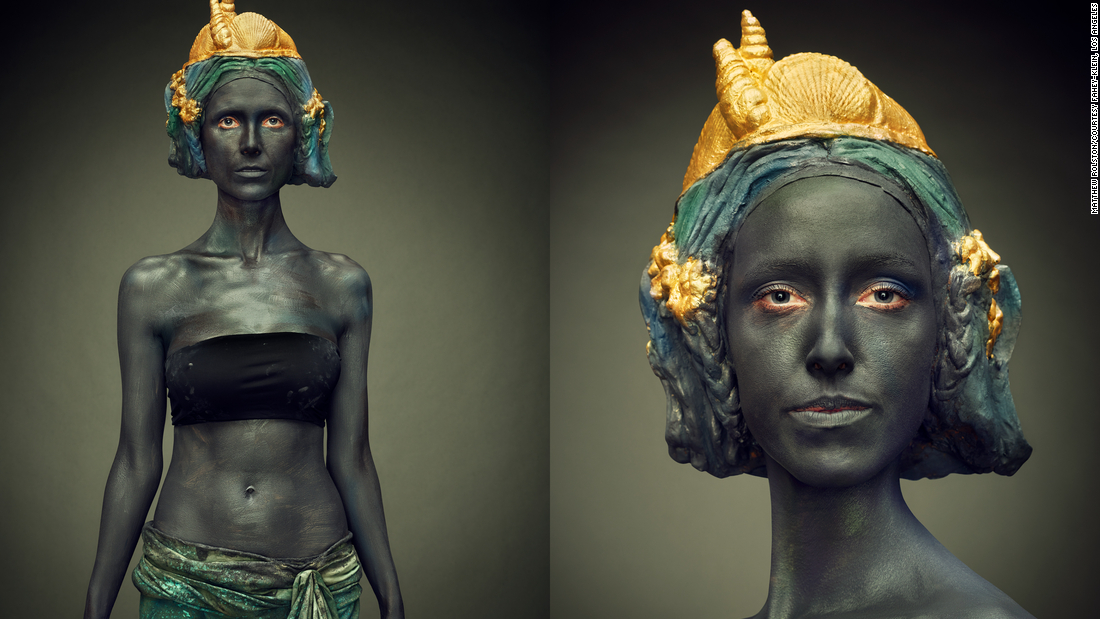 Each summer, on a stage in Laguna Beach, California, performers assemble themselves into “tableaux vivant” — living pictures.

For most in the crowd at the annual Pageant of the Masters, the illusion holds perfectly still for each 90-second scene. Look closely, however, and you may see the figures move ever so slightly, or the creased lines of makeup on skin.

Photographer Matthew Rolston, whose new exhibition at the Laguna Art Museum features striking portraits of the volunteers who transform themselves into famous artworks, did just that. “I took my field glasses (binoculars) … and I looked at those faces on the stage up close, with their crumbling makeup and such,” he said in a video interview.

The photographer may have made a name for himself shooting glamorous celebrity portraits for Andy Warhol’s Interview magazine in the 1980s, but at the pageant, Rolston “looked at the imperfection of it all,” he said, adding: “And that is what really moved me.”

Shot backstage against plain backgrounds, the photographs take performers out of their familiar settings — the intricately designed stages modeled on the artworks they imitate.

The volunteer who plays Eve in a 17th-century painting by Peter Paul Rubens and Jan Brueghel the Elder, for instance, is transported from the Garden of Eden to a plain dark backdrop, her red hair tumbling down her shoulders as she clutches the infamous apple. The impersonators of a 1968 David Hockney painting, meanwhile, have been plucked from the artist’s color-blocked suburban scene, making their painted garments and exaggerated makeup appear all the more uncanny.

Photographer Matthew Rolston photographed the actors backstage during the 2016 Pageant of the Masters. Pictured: Eve from Peter Paul Reubens and Jan Brueghel the Elder’s 17th-century painting “The Garden of Eden with the Fall of Man.” Credit: Matthew Rolston/Courtesy Fahey-Klein, Los Angeles

“When they’re on stage, they’re not individuals so much as figures in a tableau,” Rolston said. “And in a way, their personal identity is removed for that experience, for the audience. So (in these photos) you can see that slightly haunting quality of their identity, coming through the layer of artifice.”

Pageant of the Masters, part of Laguna Beach Festival of Arts, has been held in the coastal city for nearly a century. The first of its “Living Pictures” shows, in 1933, featured a reimagination of James McNeill Whistler’s famous portrait “Whistler’s Mother,” among other artworks.

In the 19th century, Impressionist artists flocked to coastal California, and Laguna Beach became a thriving creative community. But when the Great Depression hit, the city needed to encourage spending and position itself as a tourist destination, according to the pageant’s director, Diane Challis. “It started from very humble beginnings,” she said.

The Pageant of the Masters held in July 1951. The event has taken place nearly every year since 1933. Credit: Los Angeles Examiner/USC Libraries/Corbis/Getty Images

“They put it on in the open air,” she added of the early shows. “They didn’t have stage lighting; they cut up curtains and tablecloths to make the costumes. It was rather makeshift.”

Today, Pageant of the Masters is a huge production. Over the course of 90 minutes, performers recreate 40 artworks — including paintings, sculptures and mixed-media works — around a different theme. There’s a narrator, who gives the crowd a brief art history lesson with each work, and a live orchestra that produces original compositions. Challis estimates that 140,000 people see the pageant at the Irvine Bowl Recreation Park in a typical year.

Having only ever been canceled for World War II and, last year, the Covid-19 pandemic, the pageant is returning this month with the theme “Made in America.” It is set to feature recreations of photographs by Dorothea Lange and paintings by Hopper and Norman Rockwell, among others.

But no matter the theme, the show has — since 1936 — always closed with Leonardo da Vinci’s iconic fresco “The Last Supper.” It’s a fan favorite that helped bring wider attention to the show, Challis said.

“(The pageant) got nationwide publicity, because everyone … thought it was so charming that the community would reenact ‘The Last Supper,'” she said.

The art of illusion

For Rolston, who had not attended the pageant since childhood, returning as an adult in 2016 still conjured the same magic.

“There is a sense of wonder at the illusion because what they do is so amazingly well crafted,” he said. “You really think for a few moments that you’re looking at an artwork, and then you realize it’s human beings that are painting and costumed.

“It’s a simulacra and an illusion — somewhere between humanity and a depiction of humanity. And that has some intrinsic, almost primitive fascination for people.”

“There is a sense of wonder at the illusion because what they do is so amazingly well crafted,” Rolston said. Pictured: Marcia from David Hockney’s1968 painting “American Collectors.” Credit: Matthew Rolston/Courtesy Fahey-Klein, Los Angeles

The illusion is maintained with carefully applied makeup, body paint and costumes that emulate light and shadow, according to Challis. The scenes are “flattened” using stage lighting that eliminates shadows, and the artworks are all recreated within a large frame.

As well as painting people and props, the set artists use projectors to cast a scene onto the stage, filling in the image “like a paint by numbers,” Challis explained. Having long used old Kodak slide projectors, producers now also use digital video to create “projections of images and photographs … so it really helps with the storytelling,” she added. Over the decades, technological advancements like LED lighting and improved textile paints have also aided production.

The show has dabbled in live action, too. Challis’ favorite scene, from a few years ago, saw performers create a replica of an Edo-period Japanese woodblock print featuring floating cherry blossoms and imitation snowfall.

Rolston was fascinated by the artifice of the performers when seen up close. Pictured: Neptune from the Fontaine des Mers in Paris by Jacques Ignace Hittorff. Credit: Matthew Rolston/Courtesy Fahey-Klein, Los Angeles

Rolston even had the opportunity to participate in 2016, the year he photographed his portraits. He was offered the role of Judas in “The Last Supper,” though he requested Saint Matthew instead. (He had to stand on a box to meet the height requirement, the photographer recalled with a laugh.)

“The weirdest part of that experience was when the curtain went up,” he said. “(There’s) a collective ‘ooh ahh’ from the audience, and then applause. And I’m standing there doing absolutely nothing, because that’s the job: holding perfectly still for 90 seconds. I realized it was so strange; they’re applauding nothing. But of course, they’re applauding the stage illusion.”