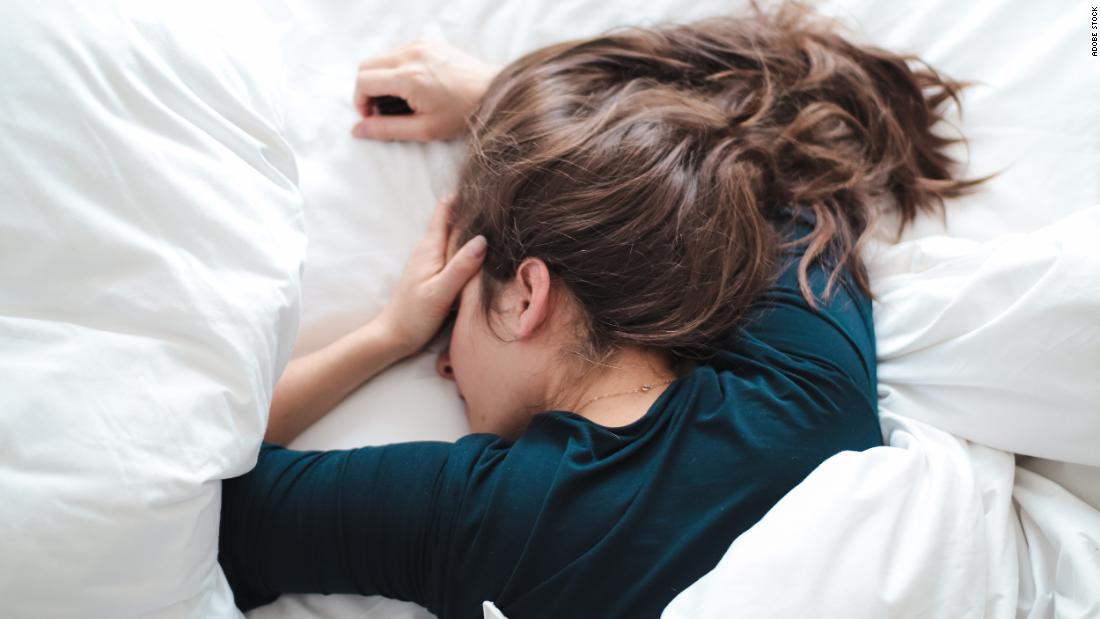 Rapid eye movement, or REM, sleep is the sweet spot of our sleep cycles, characterized by more dreaming, bodily movement, and faster heart rate and breathing than in other sleep stages.
In a meta-analysis of 32 studies, adults and children with migraines were less likely than healthy people without migraines to both subjectively and objectively get less quality sleep. The meta-analysis findings published Wednesday in the journal Neurology, the medical journal of the American Academy of Neurology.

The research stems from experts wondering whether migraines cause poor sleep quality, or if subpar sleep leads to migraines.

“We wanted to analyze recent research to get a clearer picture of how migraines affect people’s sleep patterns and the severity of their headaches,” said one of the study’s authors Dr. Jan Hoffman, a clinical senior lecturer in neurology at King’s College London, in a statement.

“That way, clinicians can better support people with migraines and deliver more effective sleep treatments,” added Hoffman, a member of the American Academy of Neurology. Hoffman consults for, serves on advisory boards of and has received honoraria from multiple pharmaceutical companies, but these activities aren’t related to the submitted work, according to the authors.

Previously observed associations between sleep disturbances and migraines have been difficult for researchers to untangle, since alterations in sleep can be a trigger, treatment or symptom of migraines, the authors wrote.

Although migraines affect around 1 billion people and are one of the leading causes of disability worldwide, according to a 2018 study, there hasn’t been much conclusive research on what migraine patients think about their sleep quality — and whether objective laboratory tests match those perceptions, according to the study.
The new meta-analysis included more than 10,000 adults and children who had participated in prior studies. Adults with migraines scored worse than healthy participants on the Pittsburgh Sleep Quality Index, a questionnaire that asks about sleep quality, how long falling asleep takes, sleep duration and efficiency, sleep disturbances, use of sleep medication, and daytime dysfunction. This finding was more common among adults with chronic, rather than episodic, migraines.
Many of the participants had undergone overnight polysomnography, a sleep study that records certain body functions as participants sleep and is used to diagnose sleep disorders. These tests showed adults and children with migraines had a lower percentage of REM sleep than control groups. Children with migraines also took less time to fall asleep, had less total sleep time and more awake time.

“This study was an association study. It wasn’t a causative study, which is always going to have limitations,” said Dr. Raj Dasgupta, an assistant professor of clinical medicine at Keck School of Medicine at the University of Southern California, who wasn’t involved in the study. “It would be nice to know what do they see in regards to the other sleep disorders like obstructive sleep apnea and other things.”

Headaches and migraines have been associated with insomnia, sleepwalking, bruxism, restless leg syndrome and narcolepsy as well, Dasgupta added, some of which could imply a genetic factor.

The studies included in the meta-analysis didn’t report whether migraine patients had experienced migraines during sleep itself, and six studies didn’t include an extra night for participants to adapt to the sleep lab, which can affect REM sleep. And the authors couldn’t totally account for potential mental health diagnoses or use of medications, both of which could influence sleep, according to the study.

But their research begins to provide “a clearer understanding of migraines and how they affect sleep patterns,” Hoffman said.

Underlying factors and tips for sleep and pain

Previous research has reported a reduction in REM sleep the night before a migraine attack, the authors wrote. One migraine symptom that has worsened after REM sleep deprivation is cutaneous allodynia, when someone feels pain after their skin is touched in way that usually doesn’t produce pain, according to the study. This suggests possible dysfunction in REM sleep processes that could cause migraines.

Children with migraines who fell asleep faster than children without migraines might have done so because they might be sleep deprived, the authors said.

There are ways both adults and children can try to alleviate sleep-related migraine problems, or migraine-related sleep issues.

For children, the American Academy of Pediatrics recommends maintaining sleep hygiene — including eight to 10 hours nightly and turning off technology an hour before bed — and a healthy diet. If your child has trouble sleeping, a pediatrician might recommend tests for snoring or sleep disorders, which have been linked to migraines, the AAP suggests. Eating three meals at consistent times daily, staying hydrated and avoiding heavily processed foods, which usually contain more migraine triggers — including sweeteners, additives and artificial colors — can help.

Advice for adults is similar. “Sleep may improve headaches,” Dasgupta said, so it’s “important to have the right quantity and quality of sleep. Remember that sleeping too much can also trigger headaches such as migraines.”

Try to go to bed and wake up at the same times each day to regulate your circadian cycle, spend more time in daytime natural light, and avoid alcohol and smoking, suggests The Migraine Trust, a UK migraine charity that helped support this study.