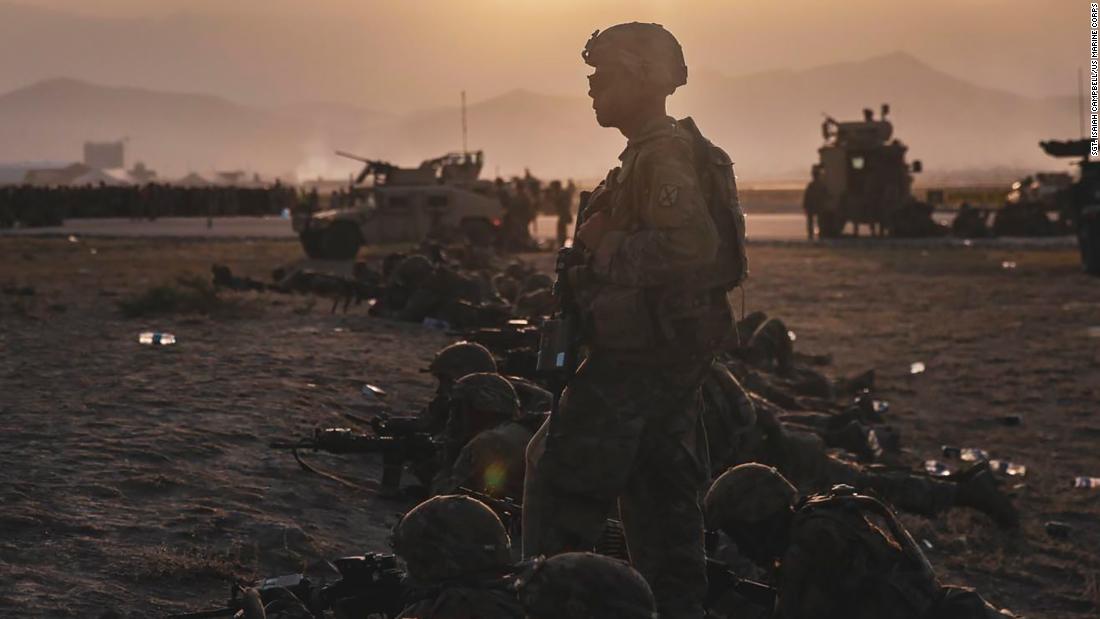 Biden, who met with senior staff in the Situation Room Wednesday, made clear he wants every flight leaving the airport filled to capacity. An official cautioned that, given the chaotic nature of the evacuation, the presidential directive doesn’t always mean it will happen for every flight.

Pentagon officials outlined ways in which they have increased capacity, with the US military troop presence in Kabul now at 5,200 boots on the ground, but military officials also offered reasons why some flights may still take off with empty seats, despite the President’s order.

The US military hopes to move 5,000 to 9,000 people a day, but they have not been able to meet that goal since the evacuation process started. Gen. Hank Taylor, the deputy director of the Joint Staff for Regional Operations, told reporters at the Pentagon Thursday that in the past 24 hours, 12 C-17 transport aircraft took off with more than 2,000 passengers. He described that as an increase in capacity, saying it “is reflective of both a ramp-up of aircraft and airlift capability, faster processing of evacuees and greater information and fidelity in reporting.”

US military troops on the ground in Kabul have opened additional gates at the Hamid Karzai International Airport hoping to increase the number of people who are able to enter and board evacuation flights, Pentagon spokesman John Kirby said at the same briefing.

To facilitate evacuations, the US military is in “communication with the local Taliban commander about making sure that those at-risk Afghans, Special Immigrant Visa applicants and additional Afghan citizens that we want to move through are able to move through,” Kirby said.

But Afghans in Kabul are battling massive crowds and violence to make it to the airport gates, only to wait for hours to enter once they’ve made it there.

The State Department sent a notice to thousands of locally employed staff at the Kabul embassy on Wednesday, telling them that they can come to the airport for evacuation flights, according to the message reviewed by CNN.

The Afghans who made it into the airport were bloody, mentally distraught, having lost most of their belongings along the way, according to multiple sources familiar with the matter.

Some decided they didn’t want to pursue the perilous journey even though they desperately want to get out of the country, multiple sources told CNN. Others who did take the dangerous risk had to turn back after facing an untenable situation.

“I decided I would rather the Taliban shoot me in the head to being stuck in that situation,” said one Afghan who worked at the embassy for years in describing his journey to CNN.

He went to the airport with his family, including small children, at 4 a.m., only to get caught in a horde of thousands of people on the outskirts of the airfield which left him fearing for his life. He watched as his 2-year-old son grew dehydrated and men tried to inappropriately touch his wife. The gates remained closed for too long.

The Pentagon acknowledged they have seen “reports of the Taliban harassing, and physically so, some Afghans that were trying to move to the airport,” Kirby said during the briefing. Conversations between the US military and the Taliban to ensure safe passage for those Afghans “continue,” Kirby said.

While Afghans report instances of violence outside the perimeter of the airport, the Pentagon said there had been “no hostile interactions” between the Taliban and US forces or American citizens on Thursday.

The Pentagon said it was focused on securing the Kabul airport when asked why US troops are not being used to retrieve Americans who are unable to get there.

The US Embassy in Kabul on Wednesday advised that it “cannot ensure safe passage” to the airport, despite the Pentagon underscoring alleged Taliban assurances that it will ensure safe transit.

As the Pentagon continues to try to get Americans and at-risk Afghans onto military planes and out of the country, the US government is up against a deadline to withdraw all US troops by August 31, a date initially set by Biden.

As of Thursday, the Pentagon said “no decision” had been made to change the August 31 deadline, despite Biden telling ABC News Wednesday that US troops will remain until all US nationals and allies are out of the country, even if it means staying into September.

“We are focused on doing everything we can inside that deadline to move as many people out as possible,” Kirby said.

Kirby also acknowledged that if US troops were to stay past the deadline, it would require “communication and a certain measure of agreement with the Taliban,” to remain in Afghanistan and continue the ongoing mission of evacuating people from the country.

Since the end of July, the US military has flown out 12,000 people with 7,000 of that total were flown out in the last five days alone, Gen. Hank Taylor, Deputy Director of the Joint Staff for Regional Operations said Thursday.

When asked how many Americans remain in Afghanistan currently, Kirby did not provide a number.

Biden told ABC the US estimates between 50,000-65,000 Afghan partners and their families are trying to get out of the country. In order to get them out before the August 31 deadline, the President said, evacuations will have to ramp up.