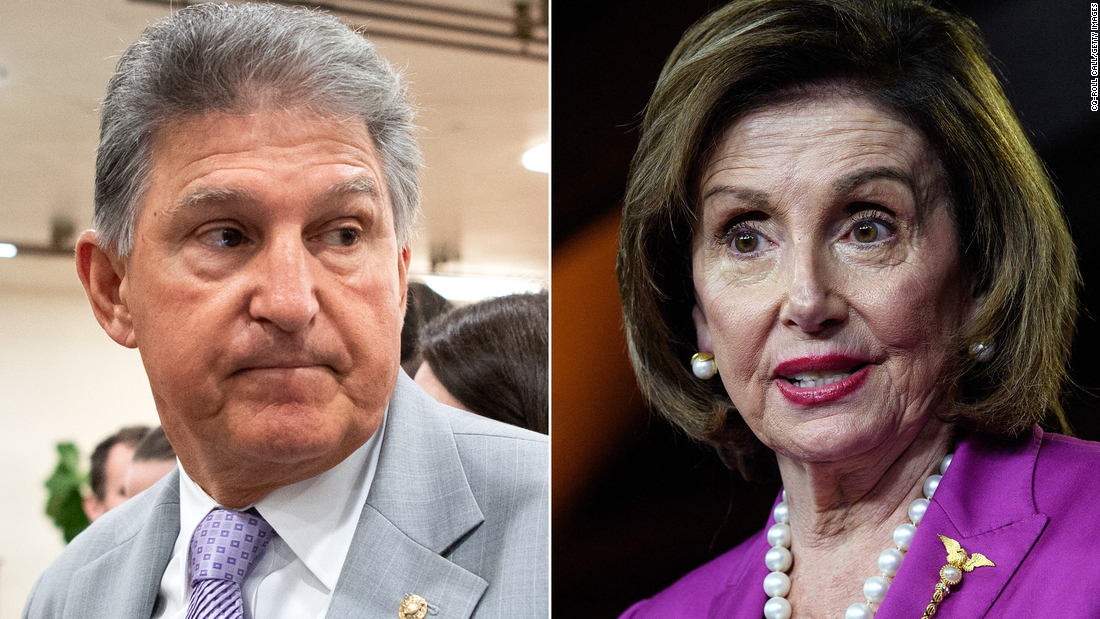 “Obviously, I don’t agree,” Pelosi told CNN when asked about Manchin’s highly publicized demand for Congress to hit the brakes on fulfilling a bulk of President Joe Biden’s domestic agenda this month.

“The number is the number, $3.5 (trillion), we can’t go above that,” Pelosi said. Asked about the likelihood she will have to go below that level, the California Democrat responded, “Why?”

Manchin has been privately suggesting to his colleagues that $1 trillion to $1.5 trillion is the price tag he could accept in the Democrats’ reconciliation bill, according to a source who has spoken to him. He has suggested that the 2017 tax law — which he opposed — could be amended to raise enough money to ensure the bill is fully paid for, the source said.

Manchin, however, has indicated to his leadership that he’s willing to negotiate, but that number is a fraction of the $3.5 trillion package that the party is trying to coalesce behind — and that liberals are demanding. Manchin’s spokesperson declined to comment.

Pressed earlier Tuesday about Manchin and Sinema’s resistance to the price tag, Pelosi said, “Well you have to go talk to the Senate about that, but we’re going to pay for as much of it as possible.”

The comments underscore the precarious situation Democrats are in as they attempt to push through a multi-trillion economic package with the slimmest of majorities, a proposal that would dramatically expand the social safety net and ratchet up government spending on key Democratic priorities on health care and climate change — and raise taxes to help pay for them. Behind the scenes, Democrats are still struggling to find consensus on a wide-range of issues, including the expansion of Medicare called for by progressives.

Pelosi downplayed the disagreements, and argued the bill would be “transformative” for women in the workplace.

“I’m pretty excited about where we are,” Pelosi said. “Everybody’s working very hard. The committees are doing their work. We’re on a good timetable, and I feel very exhilarated by it.”

But with a 50-50 Senate, Democrats cannot afford to lose a single vote to secure passage of a $3.5 trillion bill since the party is using a process known as reconciliation to circumvent the filibuster’s 60-vote threshold and instead pass the bill with a simple majority. All Republicans are expected to oppose it.

Manchin and Sinema have made clear they won’t support a bill with that price tag, with the West Virginia Democrat saying last week he won’t support “anywhere near that level of additional spending” without examining the effect on the debt and inflation.

“That’s the plan,” Pelosi said Tuesday when asked about the September 27 infrastructure vote.

September amounts to a high-stakes month for the Biden agenda as Democratic leaders have set a September 15 deadline to finalize the reconciliation proposal, and House committees have already begun taking action on their individual pieces of the larger proposal.

The House Natural Resources and Oversight Committees had votes of their portions of the $3.5 trillion package last week, and House Natural Resources Chairman Raul Grijalva of Arizona announced that the committee would have to meet again to finish up its work. A number of House committees are meeting in the days ahead to advance their individual pieces of the bill — including the much-anticipated Ways and Means Committee, which is responsible for tax policy, and Energy and Commerce, which oversees climate change and health care.

On top of that, Congress is facing a number of other deadlines that threaten to overwhelm the congressional calendar. A government funding deadline looms at the end of the month, and there is also an unresolved debt ceiling fight waiting in the wings.

Without a bill to raise the debt ceiling, the US is at risk of a potentially catastrophic debt default. And without a bill to keep the government open by month’s end, federal agencies would shut down on October 1.

Pelosi, leaving the House floor on Tuesday, wouldn’t say how Democrats will try to address the debt ceiling hike — and whether they would try to attach it to a must-pass bill to fund the government past September 30. It is widely expected that Democrats will attach the debt ceiling hike to the government funding bill, daring Republicans to vote against it.

Republicans, meanwhile, are digging in to say they won’t approve an increase — and are calling on Democrats to approve it on their own.

“We’d like to do it in a bipartisan way of course, that’s how it’s always been done,” she told reporters.

Pelosi wouldn’t say if Democrats would try to pass a debt ceiling hike through the budget reconciliation process, which would allow them to do it along straight party lines without any GOP votes. Democrats have rejected GOP calls to go that route, saying that Republicans must shoulder the burden of the politically toxic vote to raise the national borrowing limit.

“We have several options,” Pelosi said when asked if they’d go the straight party-line route if Republicans block the debt ceiling bill.

Pelosi indicated that the White House on Tuesday afternoon would send over its request for programs to be included in the stop-gap funding bill, known in the Capitol as the continuing resolution, or CR.

“So we have reconciliation, infrastructure, CR and someplace in there we’ll do debt ceiling,” she said.

This story has been updated with additional reporting Tuesday.