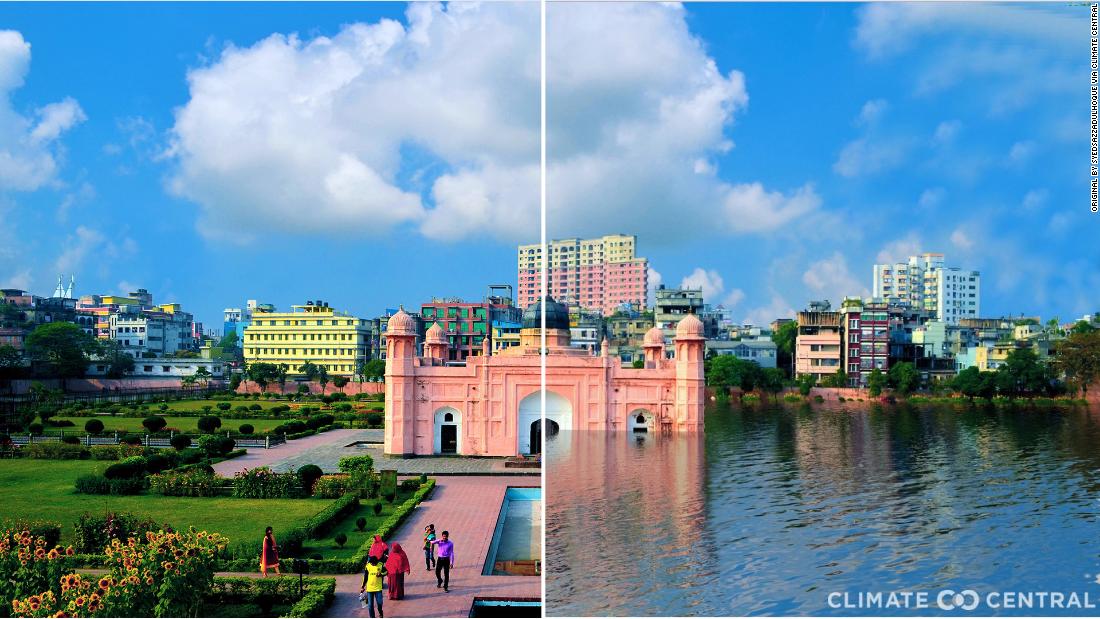 A new study from Climate Central, a nonprofit research group, shows that roughly 50 major coastal cities will need to implement “unprecedented” adaptation measures to prevent rising seas from swallowing their most populated areas.

The analysis, in collaboration with researchers at Princeton University and the Potsdam Institute for Climate Impact Research in Germany, resulted in striking visual contrasts between the world as we know it today and our underwater future, if the planet warms to 3 degrees above pre-industrial levels.

Climate scientists reported in August the world is already around 1.2 degrees warmer than pre-industrial levels. Temperatures should stay below 1.5 degrees, they say — a critical threshold to avoid the most severe impacts of the climate crisis.

But even in the most optimistic scenario, where global greenhouse gas emissions begin to decline today and are slashed to net zero by 2050, global temperature will still peak above the 1.5-degree threshold before falling.

In less-optimistic scenarios, where emissions continue to climb beyond 2050, the planet could reach 3 degrees as early as the 2060s or 2070s, and the oceans will continue to rise for decades beyond that before they reach peak levels.

“Today’s choices will set our path,” said Benjamin Strauss, the chief scientist at Climate Central and lead author on the report.

Climate Central researchers used global elevation and population data to analyze parts of the world that will be most vulnerable to sea level rise, which tend to be concentrated in the Asia-Pacific region.

Small island nations at risk of “near-total loss” of land, the report says, and eight of the top 10 areas exposed to sea level rise are in Asia, with approximately 600 million people exposed to inundation under a 3-degree warming scenario.

According to Climate Central’s analysis, China, India, Vietnam, and Indonesia are in the top five countries most vulnerable to long-term sea level rise. The researchers note that these are also countries that have added additional coal-burning capacity in recent years.

In September, a study published in the journal Nature found nearly 60% of the planet’s remaining oil and natural gas and 90% of its coal reserves should remain in the ground by 2050 to have a higher chance of limiting global warming to 1.5 degrees Celsius above pre-industrial levels. Most regions around the world, it said, must reach peak fossil fuel production now or within the next decade to avoid the critical climate threshold.
At the UN General Assembly in September, China made a major climate pledge as one of the world’s largest emitters of greenhouse gases: the country will no longer build any new coal-fired power projects abroad, marking a shift in policy around its sprawling Belt and Road infrastructure initiative, which had already begun to dwindle its coal initiatives.

If the planet hits 3 degrees, Climate Central reports that roughly 43 million people in China will live on land projected to be below high-tide levels by 2100, with 200 million people living in areas at risk of sea level rise over the longer term.

With every fraction of a degree of warming, the consequences of climate change worsen. Even limiting warming to 1.5 degrees, scientists say the kinds of extreme weather the world experienced this summer will become more severe and more frequent.

Beyond 1.5 degrees, the climate system could begin to look unrecognizable.

According to the Climate Central report, roughly 385 million people currently live on land that will eventually be inundated by high tide, even if greenhouse gas emissions are reduced.

If the planet reaches 3 degrees, the high-tide line could encroach above land where more than 800 million people live, the study finds.

The authors note in the report that a key caveat in their assessment is the lack of global data on existing coastal defenses such as levees and seawalls to fully project exposure to rising seas. Nonetheless, they recognize that because of the impacts seen today with recent flooding events and storm surges, cities will likely revamp infrastructure to avoid worsening impacts.

“Higher levels of warming will require globally unprecedented defenses or abandonment in scores of major coastal cities worldwide,” the authors wrote, “whereas the count could be limited to a relative handful through strong compliance with the Paris Agreement, especially limiting warming to 1.5 degrees.”

But coastal infrastructure costs money. Wealthy nations like the United States and the United Kingdom could afford these measures, but low-income nations could be left behind.

And while many small island nations are surrounded by mangroves and coral reefs that could protect their lands from rising seas, warming temperatures are causing ocean acidification and other forms of environmental destruction that threaten such defense measures.

During the first two weeks of November, world leaders will gather at UN-brokered climate talks in Glasgow, Scotland. They will discuss further limiting greenhouse gas emissions, as well as the amount of funding developed nations will pledge to help the Global South move away from fossil fuels and adapt to the impacts of the climate crisis.

Unless bold and rapid actions are taken, extreme weather events and climate change-fueled sea level rise will increasingly fill the future of the Earth. Scientists say the planet is running out of time to avoid these worst-case scenarios.

“World leaders have a fleeting opportunity to help or betray the future of humanity with their actions today on climate change,” said Strauss. “This research and the images created from it illustrate the enormous stakes behind the climate talks in Glasgow.”