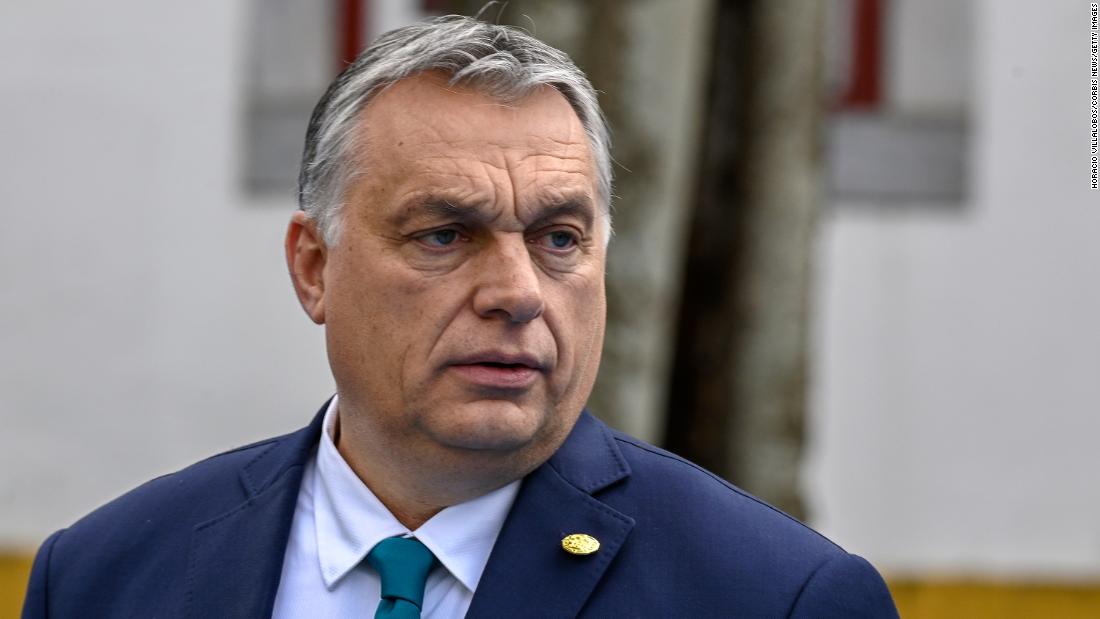 But that was before Prime Minister Viktor Orbán’s populist government announced a controversial plan for a prestigious Shanghai university to open its first overseas campus there in 2024 — which Hungarians would apparently pay for.

Now protests over the future of this nondescript site have galvanized Hungary’s opposition, and united them in an attempt to topple Orbán’s ruling party at next year’s general election.

Not that it’s hurt Orbán’s political fortunes. His right-wing Fidesz party has enjoyed landslide election wins, with no serious political challenger outside Budapest.

But the proposed Fudan University campus has become a potent issue.

Its critics point to the huge cost to Hungary, warning that taxpayer money would be used to serve the interests of China’s Communist Party. What’s more, they say the campus would be built on land slated for affordable housing for around 10,000 Hungarian students.
Thousands of protesters took to the streets in Budapest last month to oppose the plan, carrying placards emblazoned with the word “treason” and slogans such as “Hungarian money for Hungarian universities.”

Orbán has made great political capital out of promoting “traditional” Hungarian values. The opposition now appears to be serving the populist leader a dose of his own medicine.

The Fudan University controversy is “about whether this small country of 10 million can finally decide its own fate, about whether we will really be a free nation,” opposition leader and Budapest mayor, Gergely Karácsony, told demonstrators in the capital, according to local media reports.

“To an extent right now, the opposition has turned Orbán’s rhetoric against him,” said Péter Krekó, director of Budapest-based think tank, Political Capital.

Krekó said Orbán had adopted an image of himself as “the greatest defender of sovereignty — from the United States, from Brussels, from Berlin.”

Now the Prime Minister is effectively opening the door to Chinese interests — and “that’s hard to explain” to voters, he said.

“China’s image in central eastern Europe is not very favorable,” added Krekó. “This is something that can be easily exploited by the opposition.”

In a drastic move, six of Hungary’s opposition parties are putting aside their political differences to run jointly against Fidesz in 2022’s parliamentary election.

This opposition coalition is yet to announce its candidate for prime minister, though the pro-European Union (EU) Karácsony is considered the frontrunner.

In a joint letter to Chinese President Xi Jinping on June 22, the opposition leaders said that, if elected next year, they would “immediately halt” the university project and another planned Beijing-backed railway link between Budapest and Belgrade.
Hungary and China agreed a 20-year, $1.9 billion loan deal for the railway, to be built by a consortium of Hungarian and Chinese firms.

But much like the university campus, the railway has been criticized in Hungary over a lack of transparency in government dealings with China.

The controversial business ventures are all part of Orbán’s “Eastern Opening” policy. In the wake of the global financial crisis and increasing tensions with the EU, the prime minister has increasingly sought to attract Chinese investment.

“I think Orbán really deeply believes in the decline of the West, and that the East is on the rise,” Krekó said of the Prime Minister’s ideology. “And therefore, if you have to bet on who are the future leaders of the world, then it’s better to turn to China, than to the United States.”

So far, that policy has brought Hungary limited economic results. But it has created closer ties between the two countries. Hungary was the only member state to block an EU statement condemning China’s new security law in Hong Kong, and it was the first EU country to approve Chinese vaccines.

This is not the first time Hungary’s opposition parties have joined forces. The same tactic paid off in 2019’s municipal elections when Karácsony scored a shock win against the Fidesz-backed Budapest mayor.

Whether they can replicate that success at a national level is another question.

Were Orbán to be defeated, it’s no secret that EU lawmakers would largely breathe a sigh of relief, said Dermot Hodson, associate professor of political economy at Birkbeck College, University of London.

Last month, Dutch Prime Minister Mark Rutte said Hungary “has no place” in the EU after the country passed a controversial new bill banning LGBTQ content in schools — the latest in a long list of provocations to the bloc’s core values.

For EU leaders, “Orbán has been a real headache in many ways,” said Hodson, describing Hungary as a “challenger government.”

“Pushing back against the European Union, but wanting to stay within it, is a very damaging combination,” he added.

After the recent protests, the government announced a public referendum on the university — but said it would be held after the election.

Meanwhile, Hungary’s parliament — where Fidesz holds a supermajority — voted in mid-June to donate state-owned land to a foundation in charge of the planned university campus.

On the same day, the parliament also passed its anti-LGBTQ law, prompting further protests in Budapest and outrage from EU leaders in Brussels.

The timing of the anti-LGBTQ legislation was “all part of an effort to divert the attention from the Fudan project,” said Krekó. “Because the government feels this is something dangerous for their identity.”

The law also served another purpose for Orbán: It splintered the opposition alliance after Jobbik joined Fidesz in voting for it.

‘Decline of the West’

A major sticking point for critics of the university plan is the cost — reportedly more than the budget for Hungary’s entire education system.

According to leaked documents obtained by investigative journalism outlet Direkt36, the project would cost an estimated €1.5 billion ($1.8 billion), mostly financed through a loan from a Chinese state bank.

The building work, on land originally slated for Hungarian student accommodation, would be carried out by a Chinese contractor, it added.

Critics have raised eyebrows over the nature of a deal under which Hungarian taxpayers would effectively be paying for Fudan to set up its campus.

According to the Direkt36 report, the so-called Fudan Hungary University would be established and maintained by a Chinese-Hungarian asset management foundation — suggesting joint revenue from the project.

CNN contacted Fudan University for a comment on the loan, but had not received a reply at time of publishing.

The Hungarian government also did not comment on the reported cost of the loan in a lengthy statement to CNN.

However it did say that 6,000 to 8,000 students from “Hungary, China and other nations” would learn from 500 lecturers at the campus’ economics, humanities, engineering and medical science facilities.

The Hungarian government added that Fudan University was already collaborating with five German universities, 24 Scandinavian universities and had an academic partnership with Yale University in the US. “If they manage to protect their national security interests, we are capable of that, too,” it added.

Nonetheless, two-thirds of Hungarians who have heard about the project oppose the Fudan University plan, according to a poll by liberal think tank Republikon Institute.

And the university controversy could cut through to Orbán supporters outside of Budapest, said Tamás Matura, assistant professor at Budapest’s Corvinus University and founder of the Central and Eastern European Center for Asian Studies.

He pointed to Direkt36’s investigation revealing the original student housing planned for the site would be scrapped.

“Average people who would love to send their children to the capital city to study at university” understand there is “a chance that their own children will have less access to cheap accommodation, because the Chinese have taken away that that opportunity,” he said.

The Hungarian government told CNN in a statement that the proposed campus would “not be taking space away” from the planned student accommodation.

Matura said that Fudan was one of the world’s best universities. But he also feared the Shanghai institution’s deep financial pockets could draw the best professors and students from “under-financed” Hungarian universities.

Critics also fear academic freedom would be undermined by the university’s allegiance to the Chinese Communist Party.
All of which comes against the backdrop of Orbán’s controversial university reforms, which critics say extend the ideological imprint of the ruling right-wing government.
Indeed the George Soros-backed Central European University (CEU) was “forced out” of Budapest, after a years-long assault on its academic freedoms by Orbán’s government. The university relocated to Vienna, prompting protests in the Hungarian capital.

Fudan is a “kind of second part of that political story unfolding,” said Hodson. “This is a pushback on Orbán’s continuous assault on freedoms,” he added, but pointed out that “there’s a kind of progressive bastion in Budapest.”

Hodson cast doubt on whether demonstrations in the capital could seriously dent Orbán’s re-election chances elsewhere in Hungary.

In protest at the university plans, Budapest’s local authorities are renaming streets near the campus after prominent human rights causes about which the Chinese government is sensitive, including the Dalai Lama and the Uyghurs.

The Hungarian government called Budapest’s move “infantile” in a statement to CNN. And China’s foreign ministry called the behavior “contemptible.”

These are literal signs of protest. The big question is whether this resistance in Budapest also points the way to meaningful change in Hungary.