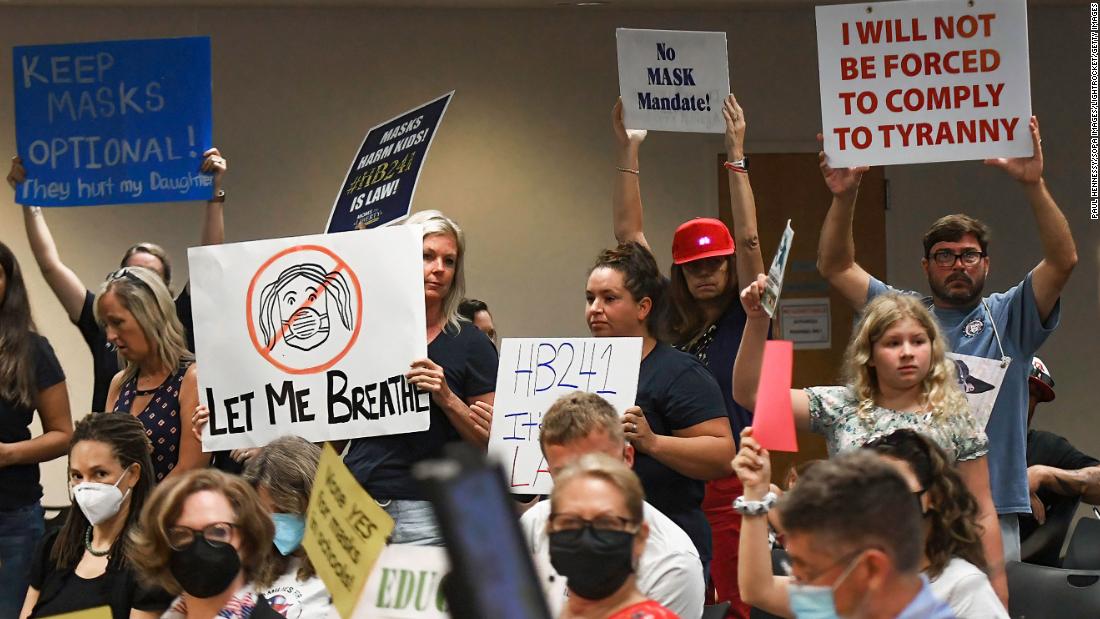 Watching parents and others yell, threaten, throw temper tantrums and weaponize their children’s emotions to voice their staunch objection to mask mandates and Critical Race Theory has been ghastly. Board of Education (BOE) members in my home district have told me stories of being followed to their cars after a meeting while enraged parents yell at them about “the permanent damage” being caused to their children at the hands of “you brainwashed cowards.”

During one board meeting, a parent in the community yelled, “I am tired of being told I live in a community!” I openly gasped. I have never heard students openly declare that they do not care about the people around them.

Students put on their masks and come to school — so happy to be together again. I find it is the adults who are having trouble dealing with the changes in our world. Their fear gets in the way of learning the facts, of discussing openly and listening closely. Nothing will be solved as long as adults lead with fear and anger.

As a teacher trying to educate students (some of whom are the children of parents participating in these outbursts), I’ve been thinking about what’s at stake for the future generation if we don’t change.

First, it’s public education. One long-standing purpose of public schools since the early 20th century is to graduate people who know how to be part of a democratic society. That purpose is being threatened by the Balkanization of the US population into distinct and rigid political groups that fight for control over what content ought to be taught in their public schools.

The United States of America is built on democratic principles. I teach my Government and Law class that it is the people who direct the actions of the government. I also teach them that to do this democratic process effectively, they need to solve problems collectively. All voices should be heard and all opinions considered. Some discussions will not be easy to have, all parties may not agree on the solution, but ideally the democratic process should turn out a resolution we all can accept.

This lesson on having fruitful and productive discussions is a tough sell in the current environment — especially when their parents are screaming at board meetings.

The risk is that students will walk away from school, the very institution that’s supposed to foster democracy, thinking that democratic practice and principles are not important or necessary for influencing government officials and government policies. The trouble with this thinking is that it leads to the dismissal of marginalized people and quieter voices of citizens, which isn’t very democratic at all.

Secondly, community participation in education is at stake. Folks who run for the board sign up for acting as the public oversight over budgets. They act as the advocates for the community and its children. BOE members are elected people from the community, volunteering to serve.

They did not sign up to be threatened and demonized by the public — their neighbors. After a year and a half of hard transitions for students — suddenly shifting to remote learning and now having to get acclimated to in-person classrooms again — schools need leaders to focus on building community, engaging in productive discourse and critical thinking. These BOE members instead spend their time fending off personal attacks.

School boards from Southlake, Texas, to Smithtown, Long Island, are seeing elections that have resulted in new members who represent singular moral viewpoints that tend to swing away from mask mandates and culturally responsive teaching. Many moderate members are either resigning, retiring or not running again — scarier still, moderate folks who want to enhance public education aren’t interested in running in this climate.

Finally, the collective health of our nation is at stake. I am baffled by the arguments against mask wearing. I am flabbergasted by the outright rejection of science. I am shocked at the general lack of a sense of community I have seen expressed at board meetings.

My students know that to move forward toward understanding and engagement, we have to be willing to talk about the hard stuff. Our mantra is “tough on ideas, soft on people.”

We need to do better. Our country deserves people willing to have difficult conversations and solve problems together. We need to turn toward each other, not away from each other into spaces where uncomfortable discussions are treated like a crime. Without civil discourse, we risk tumbling toward civil unrest.