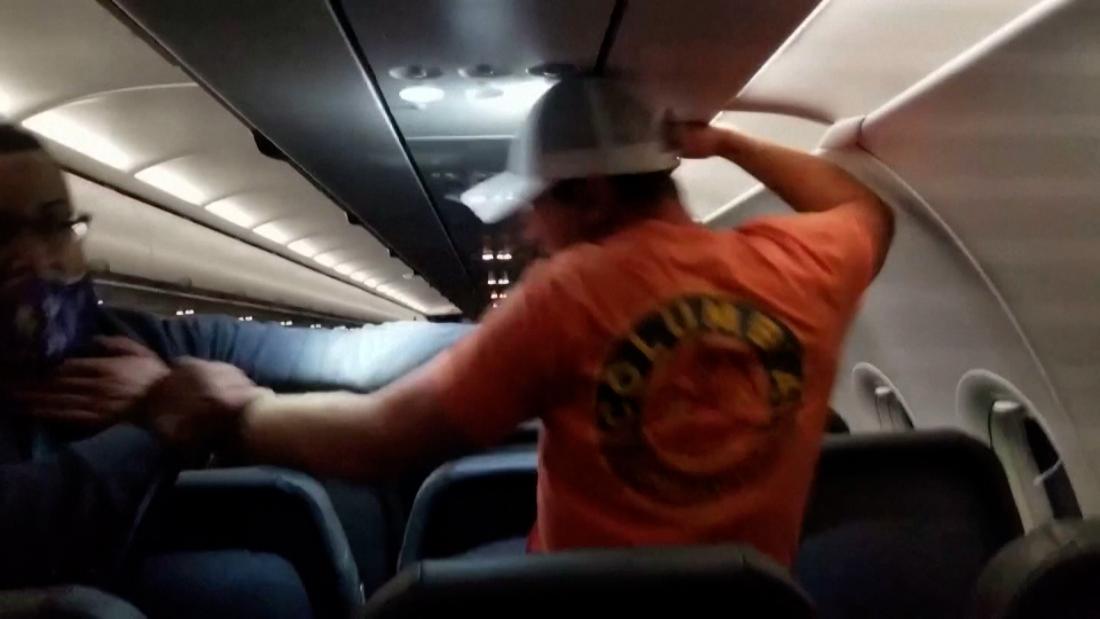 In this instance, a 22-year-old man named Maxwell Berry had two drinks on a flight from Philadelphia to Miami before he groped two flight attendants and punched a third, according to the Miami-Dade Police Department.

In one video, a member of the crew can be seen restraining the recent college graduate with duct tape. At one point, Berry, who is bound to his seat, yells, “I’m White! I’m sorry, I can’t change that!” He also screams that his parents are worth more than $2 million. (CNN reached out to Berry for comment. He did not immediately respond.)
Berry has been charged with three misdemeanor counts of battery. And while Frontier Airlines initially said the crew members would be suspended pending an investigation, the company — facing pressure from the union that represents its flight crews — later issued a statement expressing its support for the flight attendants.

For starters: flights can be dangerous and terrifying enough without privileged young bullyboys making a scene and assaulting those charged with keeping order. That goes without saying. But it’s worth unpacking the scene, as the implications are considerable.

Let me first say that I’m someone who hates flying, even though I’ve done it countless times over the decades. Who likes being trapped in a sardine can with hundreds of other passengers, lifted some 30,000 feet above sea level? When I’m far out over the Atlantic or Pacific, I feel almost frantic: lost in space, with no control over any mechanical aspects of the trajectory — not that this would actually help!

Before one trans-Atlantic flight a couple years ago, I was sitting in an aisle seat near the front of the aircraft, praying my rosary before we took off. I was doing this under my breath when a flight attendant touched my elbow and said, “I’m sorry, sir. But you’re going to have to stop that. You’re frightening the other passengers.”

Did they imagine I knew something they didn’t? Or was it just that, in the long and turbulent wake of 9/11, flight attendants have had to exercise extreme caution and vigilance? And while many people have started flying again after the Covid-19 pandemic decimated the travel industry, flight attendants are now facing an uptick in harassment and other unruly behavior — especially after the federal mask mandate on flights and in airports was first issued in February.

It’s not far-fetched to assume everyone on a flight is terrified, if not simply stressed. In this instance, a young man acted up and caused a ruckus. As a college professor for many decades, let’s just say that this unruly and entitled behavior is not entirely unfamiliar to me. I know what is possible here.

But there’s a bigger story behind this incident, as I’ve suggested. It’s about cultural change. The #MeToo movement and the death of George Floyd have prompted an ongoing cultural transformation that is long overdue for many — while painful or bewildering for others. White fragility is a real thing, and this young man is a poster child for that phrase. He nakedly flaunts his Whiteness — while expressing his powerlessness: “I’m White. I’m sorry I can’t change that!” We can’t know exactly what was going on inside his brain, but what we do see is the resentment, the privilege, and the suggestion that he’s somehow a victim.

This hapless young man speaks volumes in a few words. He’s White, yet he seems to suggest that’s somehow a burden. He claims his parents are “worth more than … 2 million … dollars” and yet he cries out, seemingly aware that it’s of no help to him in the moment.

The clock isn’t going back to a time when a young White man could get drunk, grope women, and brag about his parents’ money. That day is over and done with, and it’s a good thing.

It would be too easy to cast Maxwell Berry as an outlier, and I want to resist that impulse. It’s too easy. Of course his behavior was damaging and disrespectful. But if we look past his shouting, we can see an emblem of the uncertainty of our times.

The reckoning with race and male privilege is very real — I see this as I drive down the street of the small town where I live and see Black Lives Matter signs in front of the homes of White, working-class families. I feel it in my bones. It’s important to stop, breathe, and acknowledge this moment of profound change. Change is here, with more to come — and we should expect countless bumpy and painful episodes like this in the future, as people grapple with a world in flux. (And I don’t doubt that the insurrection of January 6 folds into this story somewhere: Members of the unruly mob were no doubt feeling the earth moving under their feet as they hoped to stop time and return to an era in American history before anyone questioned White privilege or male prerogatives.)

Progress is never linear, of course. It’s a zigzagging, uncomfortable affair. And this uncomfortable episode on a flight from Philadelphia to Miami has a lot to say, if we choose to listen with humility, broad-mindedness, and even compassion. One thing is certain: This young man, like so many others, is going to have to learn some big lessons, and face this new world in fresh ways.