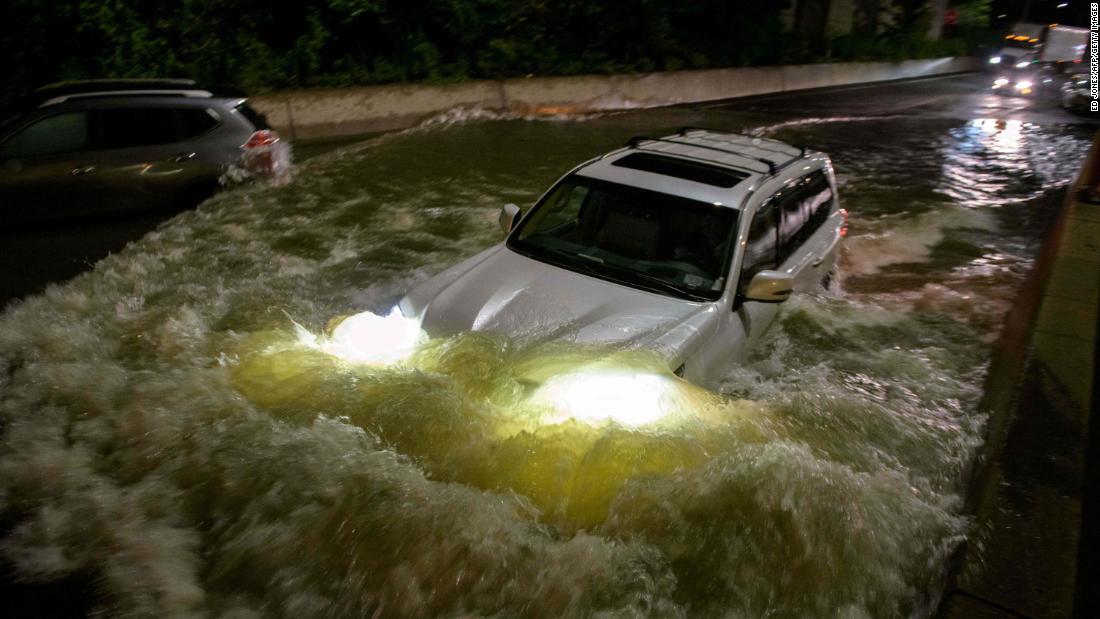 The remnants of Hurricane Ida wreaked havoc across the Northeast on Wednesday night, killing dozens of people. Cell phones buzzed with tornado warnings and the National Weather Service issued its first-ever flash flood emergency alerts for parts of New Jersey and New York City. More than 150,000 homes were left without power, while New York and New Jersey declared states of emergency.
Subway stations in the city suffered historic flooding as water paralyzed transit and the Metropolitan Transportation Authority had to evacuate hundreds of people. Cell phone videos captured water pouring into basements and cars floating on the streets.
The remnants of Ida brought heavy rain and wind. None of that was really unusual. And in a way, that’s the problem. Our gut tells us these events have happened before. Rain seems normal enough — until we face the fact that New York City got 10 inches of it in August alone, which is about six inches more than normal. Of New York City’s top 20 heaviest one-hour downpours, four took place this year.

But scientists don’t just focus on events; we focus on patterns formed by events. Especially changing patterns. Sometimes a slow-moving thing hits us while we’re too busy focusing our gaze elsewhere.

Trust me, I’m not one for dire warnings. Like most scientists, I’m not an alarmist and I don’t jump to conclusions. If anything I am a “wait and see” kind of guy. But there is an undeniable pattern here: more extreme weather is happening more often, and we are its cause.

We are increasingly locked into a world of our own making. We have exchanged planetary stability and the capacity for the world to support life for a growing population, transportation, merchandise and agriculture. Fossil fuels are at the core of this unchecked development. The industrial revolution, agricultural revolution and digital age — along with the tripling of human population that has happened in my lifetime — were all enabled by fossil fuels.

What do we do after an incident like Ida? Storm surge barriers — likely necessary to protect some areas from tidal flooding from the ocean — will do nothing against devastation raining down from above. Hurricane Ida, which dealt Louisiana yet another devastating blow, dropped tornadoes along its path like breadcrumbs as it slowly made its way north. In Central Park, the 3.15 inches of rain that fell in just one hour last night broke the record set only last week by Henri.

Unless we are willing to take sweeping, systemic action to fight the climate crisis and reduce our reliance on fossil fuels, we are at the mercy of such merciless weather.

In one video shot from inside a flooded bus on Wednesday night, someone can be heard saying, “This is what climate change does. This is why we shouldn’t be freaking polluting this atmosphere.” Well, that’s true enough. The Intergovernmental Panel on Climate Change (IPCC) projects the air can absorb 7% more water for every 1.8° F (1° Celsius) the planet warms — which means more extreme rainfall. That might sound like a negligible amount of rain. But we are seeing how significant that actually is. The infrastructure we have now was built on assumptions that no longer hold true, as we see the new reality of climate change arriving on the winds of unprecedented change.

For more than 30 years, hundreds of scientists who are part of the IPCC have been analyzing trends, reporting findings and making predictions and recommendations. Most recently they have sounded the alarm in stronger-than-ever terms that the extremes of fires and floods and heat waves and deluges are of our making. Many people don’t like that news. It’s as if we think we’re in a Facebook world where we get to shape our reality by clicking “like” — or not. But the climate crisis is happening, whether we like it or not.

We take these pummeling storms one at a time. And then we show our tough spirit and vow to rebuild. “We’ll get through this one, too,” New York Mayor Bill de Blasio said. “Let’s get this storm by us.” But what about responding to the pattern?

It’s clear humanity has never had a plan. And watching our collective response to dire warnings, devastating fires and deadly floods, I’d say we are not that interested in glancing at the map to see where we are headed. Meanwhile, we’re still mainly operating under the ethos of bigger, faster and more, with little foresight as to where that gets us. But the map does show where we are headed. As does the weather. The information is there. We already know — we just like to travel carefree and “see what happens.” We are starting to see that now.

Today in New York, the sun is out. The forecast projects pleasant weather for the next few days. It’s tempting to hit that snooze button and pretend like what happened last night was an aberration. But we should all be wide-awake and fully alert to the disturbing patterns of climate change. Given the devastation we’ve already seen play out over and over again, we can no longer afford to wait and see what happens next time.