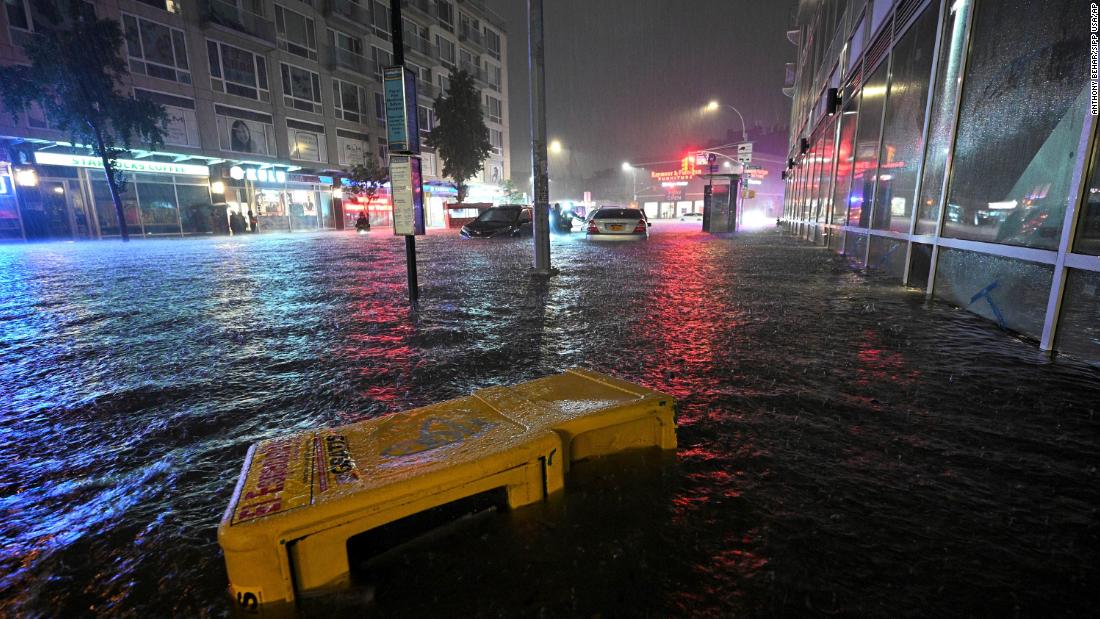 The fatalities in New York City — which exceed the number of deaths reported in all of Louisiana so far — are a grim reminder that climate change is scrambling all of our assumptions about weather, resiliency and emergency preparedness. Most of the victims in New York drowned in basement apartments that suddenly filled with water. More than 7 inches of rain fell in Central Park over a period of 12 hours, with 3.15 inches of it pouring down in a single hour, setting a new record that was only just broken during Hurricane Henri last month.

“What we’ve got to recognize is the suddenness, the brutality of storms now, it is different,” New York Mayor Bill de Blasio said at a post-storm press conference. “A record set two weeks ago, another record set now, rainfall like we haven’t seen ever before. This is the biggest wakeup call we could possibly get.”
Well, yes and no. New York, like other big cities, has leaders who are fully versed in the language of how to battle climate change, long term. De Blasio has introduced a range of strategies for reducing carbon output, including a tough local law that requires skyscrapers and other large buildings to make sharp reductions in carbon emissions by 2050. He also has championed a $10 billion plan to extend the coastline of lower Manhattan to act as a protective seawall.

But in the critical hours before Ida struck, New Yorkers needed a mayor focused less on the big picture and more on the immediate crisis with matters like communications, contingency plans and basic preparedness.

Before Ida hit, de Blasio and other officials did not hold a press conference dedicated to storm preparation, a precaution the city normally takes before snow storms, hurricanes and other weather events. Beyond a passing mention of an anticipated 3 to 6 inches of rain at his daily briefing on Wednesday morning, the mayor did not do enough to sound the alarm and get the word out about the dangers of intense rain and flooding. There were no contingency plans to shut down the subway system, a decision that left hundreds of passengers trapped underground as the storm knocked out most train lines.
The mayor blamed it on meteorologists’ forecasts. “We’re getting from the very best experts, projections that then are made a mockery of in a matter of minutes,” he said. “Yesterday morning, the report was three to six inches over the course of the whole day, which was not a particularly problematic amount. That turned into the biggest single hour of rainfall in New York City history with almost no warning.”
Not exactly. The National Weather Service (NWS) warned on Monday that there could be “heavy, flooding rainfall” in New York on Wednesday. The NWS also tweeted on Tuesday evening that up to 8 inches of rain was possible, with a warning that “considerable to significant and potentially life-threatening flash flooding is expected.”
Even on normal days, it is a major undertaking to keep the New York City subway system dry. Trains run 24 hours a day, seven days a week, through a maze of tunnels that snake below sea level, under rivers and through natural springs and groundwater. The subway has 300 underground pump rooms that collectively pull 14 million gallons of water out of the system every day.
On heavy rain days, the pumps get overwhelmed. And when a major storm like the remnant of Ida hits, rivers of rainwater gush into the subway. So whether the forecast of 8 inches of rain fell over two hours or 10, de Blasio should have known it could present a major problem for New York.
It is indisputably true that global warming is the root of the problem. “Hurricanes get their strength from the waters that they’re passing over, from all of the heat and the energy in the water,” Kristina Dahl, a senior climate scientist at the Union of Concerned Scientists, told me. “And the warmer that water is that they’re passing over, the more fuel they have to strengthen. So that’s why we see hurricanes intensify when they go over stretches of anomalously warm water like we had in the Gulf of Mexico just before the storm hit.”
Dahl says the warming is responsible for the phenomenon of rapid intensification, like when Ida jumped from Category 1 to Category 4 right before making landfall — something she says now happens three times more frequently than in the 1980s.

Faced with this knowledge, local officials have a duty to not only bolster our infrastructure and institute long-term changes, but also to protect citizens, trigger contingency plans and warn us about the risks of imminent weather events, knowing the effects of climate change are already in full force.

“I want to have an after-action report on this,” New York Gov. Kathy Hochul said. “What did we know and when do we know what we had, what information did we have? Are there any intelligence failures in terms of our preparedness?”

Hochul went on to put her finger on the main issue that governors and mayors have to confront in all 50 states.

“Anyone who says it’s once in a century, once in 500 years — I’m not buying it. This has to be considered the normal course of business. So we need to take steps to prepare,” she said. “Is our communication system adequate to let people know in homes and on subways that this is dangerous? Are alerts going out on people’s cell phones? How do we communicate? And are we doing a good enough job? Because I’m not going to stand here and guarantee it won’t happen again tomorrow. I don’t know that, but I know we need to do much more in our resiliency, addressing climate change.”

That is the new normal: preparing for hurricanes that can cause wind damage and storm surges in the Gulf and carry enough force and precipitation to wreak havoc days later and more than 1,000 miles away. It’s not the job Northeast officials expected, but one they can no longer avoid.