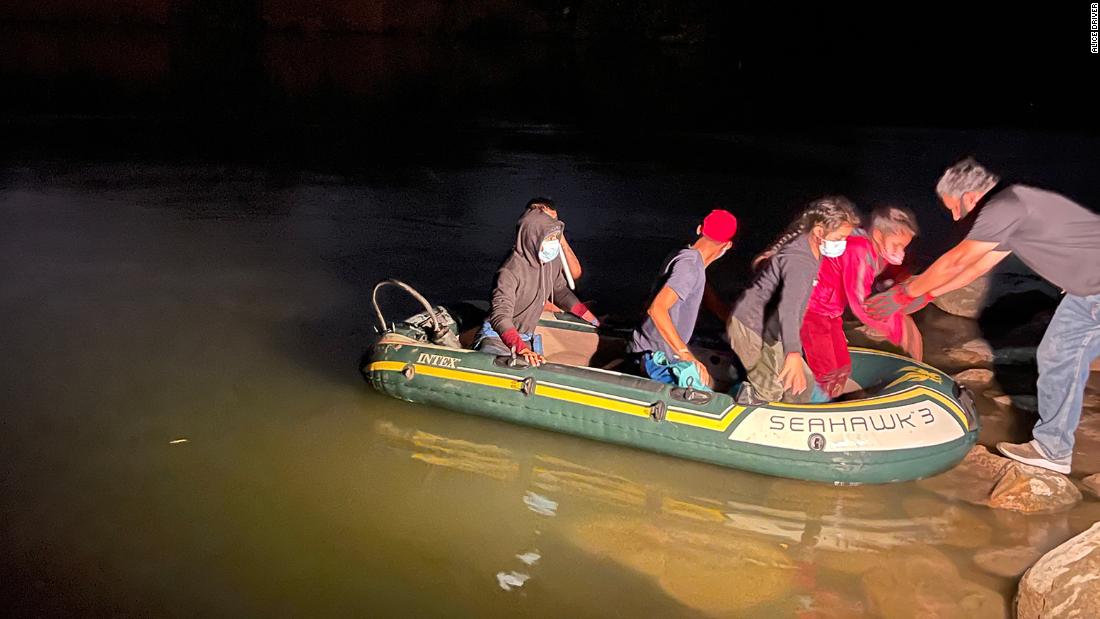 A migrant minor in Tapachula told me how she became an orphan — explaining of her parents, “They died because of the hurricane, and, truthfully, I was destroyed.” She had migrated alone to Mexico hoping to eventually request asylum and reunite with family in the US.

Migrants from El Salvador told me stories of fleeing desperate hunger in their homeland, of placing white strips of cloth outside their homes to indicate that their families were on the verge of starvation. Kind neighbors and strangers, if they could, would leave food outside their door.

Girls as young as 12 years old told stories of fleeing the effects of last November’s Hurricanes Eta and Iota, which had left villages underwater, in some cases killing entire families or leaving children orphaned. It should come as no surprise that as Covid-19 cases rise again and the Delta variant spreads in nations where citizens have little or no access to vaccines, crossings at the US-Mexico border have reached a two-decade high.
President Joe Biden’s administration has framed the issue as a crisis — as a surge that needs to be slowed — but it should reframe it as an opportunity to address the labor shortage. His handling of the crisis has sparked criticism from immigrant advocates, as well as right-wing leaders.
In June, Vice President Kamala Harris, who is leading the administration’s efforts to address the root causes of migration, traveled to Guatemala and told migrants, “Do not come to the US.” Simultaneously, the US is facing a labor shortage that is evident in sectors like agriculture, meat processing and jobs involving the food supply chain.
When I gave a lecture on migration at Harvard University in March, one of the students in the audience asked me for one example of practical action the US government could take to address the border crisis. I responded that we as a nation simply needed to acknowledge the degree to which we rely on immigrant labor, especially undocumented immigrants, and to offer migrants legal options to work in the US, even if only as seasonal labor.
The Biden administration should repeal the Trump era Title 42, a public health order which allows border agents to expel migrants without allowing them to request asylum. In addition to turning away asylum seekers who would like to work and become productive citizens, many work visas like the EB-1 Extraordinary Ability visa are for highly skilled workers. As the EB-1 describes, “Few foreign nationals qualify for extraordinary ability visas, because you have to demonstrate that you are in the top of your profession and that you have sustained international or national acclaim in your field.” There are few options for unskilled workers, like those who work in meat processing, agriculture or restaurants — the industries most affected by the labor shortage.
Other options for work visas include the EB-1 Multinational Executive, the EB-2 Advance Degree and the TN visa for Canadian and Mexican citizens to come to the US to work for a US employer. Work visa options for migrants fleeing conditions imposed by the pandemic and climate change are few. For example, the H-2A visa program allows US employers to bring foreign nationals to the US to fill temporary agricultural jobs.
The labor shortage crisis is due in part to immigration restrictions that have reduced the number of unskilled workers. As of October 2020, immigrant and non-immigrant visas issued were down 54% from 2019. In 2021, farms, factories and restaurants — all in need of unskilled workers — have struggled with the labor shortage and many have offered increased pay and perks to attract workers. As Marisela Salazar reported in 2021, “Undocumented workers comprise 10 percent of all restaurant employees in the US, and as many as 40 percent in urban areas such as Los Angeles and New York.” As the agricultural sector, food production and restaurants reckon with issues surrounding Covid, the Delta variant, mask mandates and vaccines, they must also acknowledge the role of immigrant and undocumented labor in maintaining our nation’s food supply.
I’ve spent the last year covering working conditions at Arkansas-based Tyson, the largest US meat company. I’ve witnessed firsthand how the labor shortage has affected workers from Mexico, Guatemala, Myanmar and the Marshall Islands.

In recent months, workers at Tyson plants in Arkansas that I’ve interviewed told me they have been asked to work seven days a week with no break and to forgo their 2021 Christmas break. A notice from Tyson shown to me by one of my interviewees at a Springdale plant advised workers, “Any Team Member who has taken a December vacation in the past 3 years will not be available for a vacation in December unless there is room available.”

Derek Burleson, a spokesperson for Tyson, denied that the company is asking workers to work seven days a week. Burleson noted that Tyson “briefly tested a crew rotation pilot program at one facility in Arkansas” on a volunteer basis to work Sundays with overtime pay and making sure they’d get time off so as not to work the entire week. He said, “All team members, company-wide, are given Christmas Day off. But like most companies (and newsrooms), we can’t have everyone at the plant take the same week off.” He added that the company staggers the week between Christmas Day and New Year’s because much of its workforce needs to travel abroad during the holidays. “So, we’re actively working to ensure our entire workforce has an equal and fair opportunity to take vacation time,” Burleson said.

Several workers from Central America told me they requested notes from the priest at their church to get an exemption from working on Sunday. They wanted to go to church and spend the day with their loved ones rather than accepting a brutal work cycle which put strain on their families and other relationships.

These workers are thankful to have a job and to be able to send money to support their families back at home. However, the labor shortage has made their work more difficult and dangerous as they say they are required to work overtime on lines that are understaffed but still processing products that are in even higher demand than before the pandemic. In an instant, a tired worker can find their hand caught in machinery and sustain an injury that will leave them disabled for life. To make such jobs safer, the Biden administration needs to resolve the labor crisis, including addressing pay and safety issues.
In this global pandemic, a time of instability and uncertainty, so many US citizens have the privilege of accessing the vaccine, of having a job, a salary, their daily bread. In Mexico, as Covid cases rise again amid a shortage of vaccines, and as hospitals struggle to keep up with the demand for oxygen, families find themselves buying oxygen tanks on the black market. In Guatemala, impoverished families march through the streets shouting, “We are hungry” and relying on charity to survive.

Indeed, in many countries in Central America, citizens measure the risk of Covid against the chance of themselves or their families starving. Given these conditions, many are migrating to the US where they know they will be hired — even without documents — to work in restaurants, meat processing plants and the agriculture sector.

A truth that we should hold evident in the US is that the committed, relentless work of immigrants upholds our food supply system. In fact, an estimated 82,700 undocumented immigrants work at food processing facilities in the US, according to the Center for American Progress.

By not acknowledging their work, by not providing a legal means for them to contribute their valuable labor in the US, by forcing migrants who want to work to cross into the US illegally and work without documents, we put them at a greater risk of being exploited. As an increasing number of migrants arrive at our borders, the Biden administration should offer them a range of legal options to work in the US.