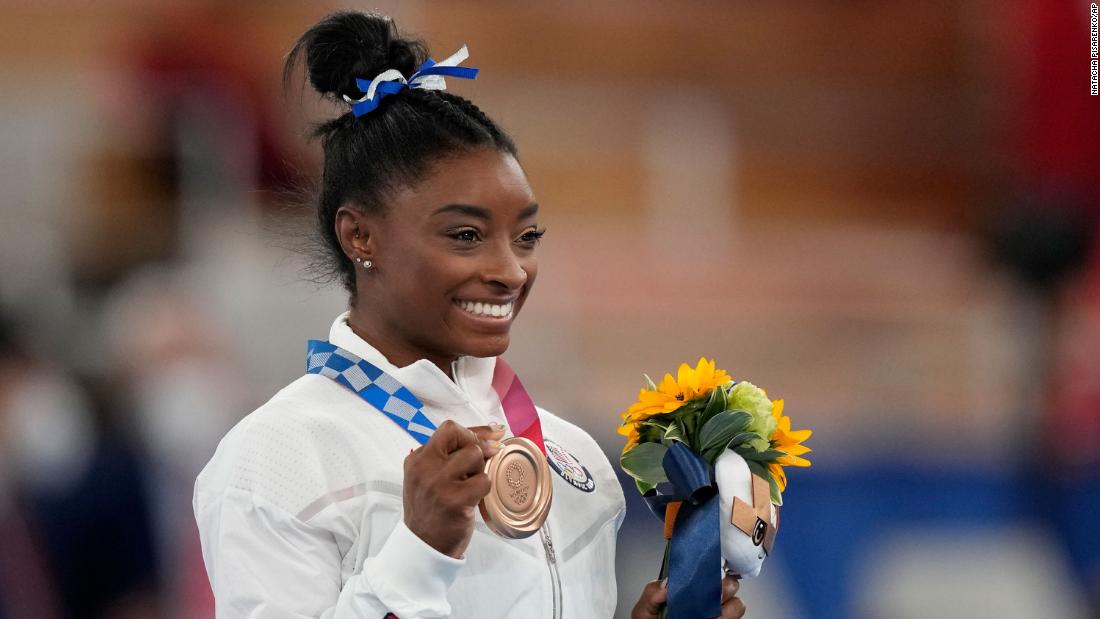 Well, there’s a new bronze medal in town, and it just might mean even more.

Biles returned to the competition floor Tuesday night in what is the closest thing to a crowd we have seen at the Tokyo Olympics, where spectators are forbidden because of Covid-19 protocols. The people who filled Ariake Gymnastics Center were a mix of journalists, athletes and other accredited folk, including Thomas Bach, president of the International Olympic Committee.

They were there to see Biles, who had shockingly pulled out the team competition last week and subsequently withdrawn from the all-around competition, as well as event finals in uneven bars, vault, and floor. She was the first gymnast to qualify for all six gymnastics events since American Shannon Miller and Romanian Lavinia Milosovici in 1992.

The announcement from USA Gymnastics early Monday that not one but two US athletes would compete in the beam final verified what gymnast MyKayla Skinner predicted after she took silver on the vault on Sunday. Skinner, who got the Olympic shot she had been waiting for since going to Rio in 2016 as an alternate, told reporters that she thought Biles, whose withdrawal from vault made room for her to participate, would compete on beam alongside teammate and all-around gold medalist Suni Lee.

And compete she did. After days of heartily cheering her teammates from the stands wearing a Team USA t-shirt, Biles was back in a bedazzling red, white and blue leotard, competition ribbons in her hair, to perform a clean, familiar, routine in which she substituted a solid double pike dismount, which requires no twisting.

Her eponymous move off the beam, a double-twisting double backflip, wasn’t possible for Biles after days of dealing with what gymnasts call “the twisties,” in which the athlete loses awareness of where they are in the air, exemplified by Biles’ nearly disastrous vault at the start of the team competition last week. In an interview last year, Biles offered some insight into what it is like when she finds herself incapacitated in this way: “Having breakdowns, pretending to forget how to do my skills,” said Biles. “That’s where we’re at right now.”

In Tokyo, after sticking her landing off the beam, Biles smiled, clapped and tapped her chest before finding her coach and teammate Suni Lee for celebratory hugs. Her score, a 14.000, was good enough for bronze behind China’s Guan Chenchen and Tang Xijing. Teammate and all-around gold medalist Suni Lee, who came close to falling off the apparatus after a side aerial went a bit amiss, finished fifth.

With her seventh career Olympic medal around her neck, Biles has further emblazoned her name in the history books. She is now tied with Shannon Miller for the most Olympic medals by a US gymnast, and she joins Larisa Latynina of the Soviet Union as the most decorated in Olympic and world championship competition, with 32 medals total. She has also won a medal in every world and Olympic balance beam final she has been in, dating back to a bronze medal at the 2013 worlds.

Of course, some folks will still want to focus on what Biles didn’t do in Tokyo. Coming into these Olympics, many predicted she would take home five golds, creating what she called “weight of the world” pressure. When she sat down after that first vault in the team competition, largely for her own safety, it wasn’t because she was afraid she couldn’t win. She was worried that her poor performance would prevent anyone else on her team from winning.

And win they did. Silver in the team competition. Gold for Suni Lee in the all-around, and bronze on uneven bars. Silver for Skinner on vault. Gold on floor for Jade Carey, who came back from a horrendous night on the vault and a pep talk from Biles herself to get it done.

Biles opened the way for every single one of these medals, knowing that she could not continue in the team competition after her first vault went so horribly wrong, and then withdrawing from four of the five event finals she qualified for. She returned when she thought she was ready, and not a moment before.

It has been quite an Olympics for Simone Biles, but in a way that no one could have anticipated. Two medals, epic cheerleading on behalf of her teammates, and a whole lot of light shed on the mental health of athletes, joining luminaries such as Naomi Osaka and Michael Phelps.

While Biles has made mention of possibly making an appearance in Paris in three years, it is conceivable that Tuesday’s beam final was, indeed, her farewell to the Olympic Games. If so, what is left for us to do is be thankful that we got to see her end on a high note, doing it her way.