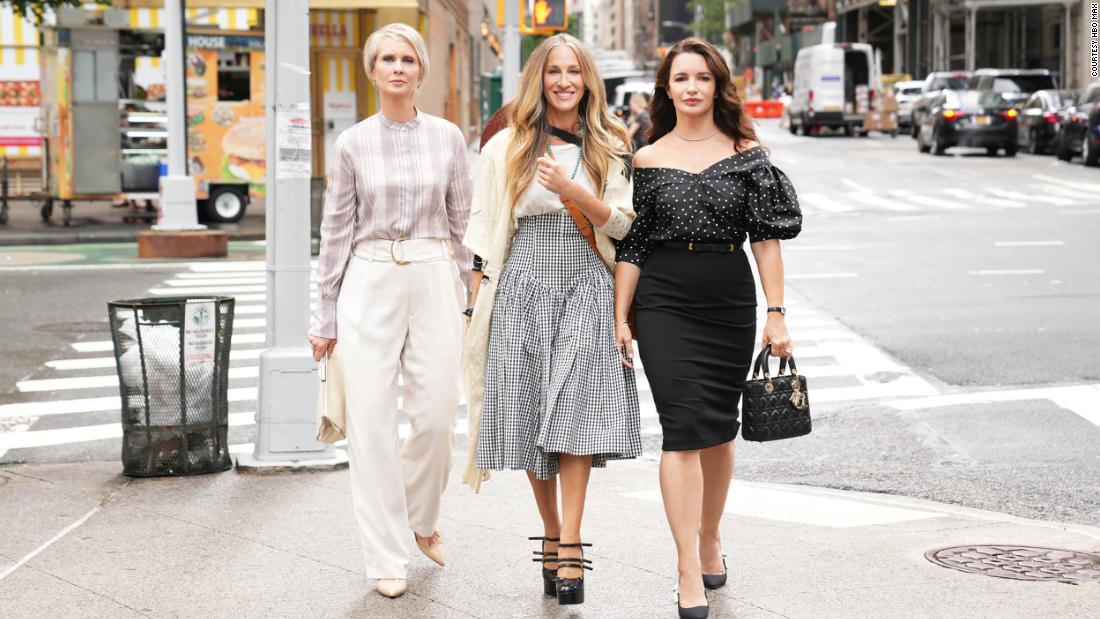 And this time, it’s a lot older and a little less White. In other words, closer to reality — finally.

HBO Max says it will be releasing the “Sex and the City” reboot — “And Just Like That … ” — sometime this fall, and it appears that Kim Cattrall’s Samantha Jones character is being replaced by actress Nicole Ari Parker, who is Black, and who will play documentary filmmaker Lisa Todd Wexley, the new fourth friend of Carrie Bradshaw (Sarah Jessica Parker), Charlotte York Goldenblatt (Kristin Davis), and Miranda Hobbes (Cynthia Nixon). (HBOMax shares the same parent company as CNN.)
Those four will appear alongside a supporting cast that includes a wider diversity of characters and roles: the queer and nonbinary podcast host and comedian Che Diaz (Sara Ramírez); real estate broker Seema Patel (played by Sarita Choudhury); and law professor Nya Wallace (Karen Pittman).

It’s a worthy shift. As much as “Sex and the City” — which debuted 23 years ago (!) and ran for six seasons (with two film adaptations) – defined New York for a certain subset of the population — White older Millennial women, of which I am one — it never quite lined up with real-world New York City, or at least not with the New York I’ve ever lived in.

Sure, plenty of White New Yorkers, especially in tony neighborhoods like Carrie’s Upper East Side, surround themselves with other White people. But in a city that is less than half White, it’s a choice to have one’s whole social circle be so homogeneous.

It’s also a choice to make a television show that imagines New York as a dominant-White town. And it’s laudable, if ridiculously overdue, that the people behind the “Sex and the City reboot have recognized that initial folly and are, at least in some small ways, correcting course.

This is still not a show with a cast as diverse as the city it’s set in. But it’s an important turning point because these casting shifts in such a valuable asset as “Sex and the City” reflect how much the expectations of viewers and critics have changed.

The United States continues to become more racially and ethnically diverse, with younger generations in particular growing less White by the decade. The target audiences for television shows like “Sex and the City” have been younger Americans… who in 2021 are no longer overwhelmingly White. Those audiences expect the shows and movies they watch to reflect their own realities back to them. A straight White New York City doesn’t do that.

And these more-diverse-than-ever viewers also have more of a voice than ever before, having spent the nearly two decades since the show’s debut growing up and grabbing metaphorical megaphones, whether that’s on social media or in media jobs.

As viewers have become more diverse, so have critics (the official kind and the social media kind) and they are quick to note where television shows are unrepresentative.
Are the critics and talking heads as diverse as America? No. Are they more diverse than they were a generation ago? Like the rest of America, yes — slow to change and imperfect, but changing, and demanding better.
One group that remains radically underrepresented on television is women over 50. And there, the “Sex and the City” reboot is especially refreshing. Nicole Ari Parker, who is 50, will be the youngest lead actress on the show. A worse reboot would have simply replaced all four women with younger ones. This one appears to make the argument that middle-aged women have sex lives, too — not, as is the case on so many television shows, that women over 40 are either de-sexed moms or frustrated, pathetic singles.

Since its inception, “Sex and the City” seems to have inspired more hand-wringing and hot takes about a television show’s impact on women, singlehood and sex than just about any other (only Lena Dunham’s “Girls” has prompted such a bottomless well of critique).

Was it radical in its open discussion of women’s sex lives, or was it heteronormative in its focus on straight women with pretty vanilla tastes in bed? Was it feminist with its work-hard, play-hard female characters… or covertly traditional in each of the characters’ pursuit of men and most of all their desire for a partner?

My guess is that the reboot won’t have quite the cultural salience of the original. The casting changes strike me as unlikely to make a show (even if beloved) with a dated premise feel fresh and new.

But from a cultural standpoint, the changes in this latest “Sex and the City” iteration are good ones. They reflect back at us a nation unsatisfied with a racist status quo, and a growing recognition that women continue to exist as full human beings after 40.

It’s not all that radical, and television remains far out of whack with the realities of a more diverse America. But it’s progress.