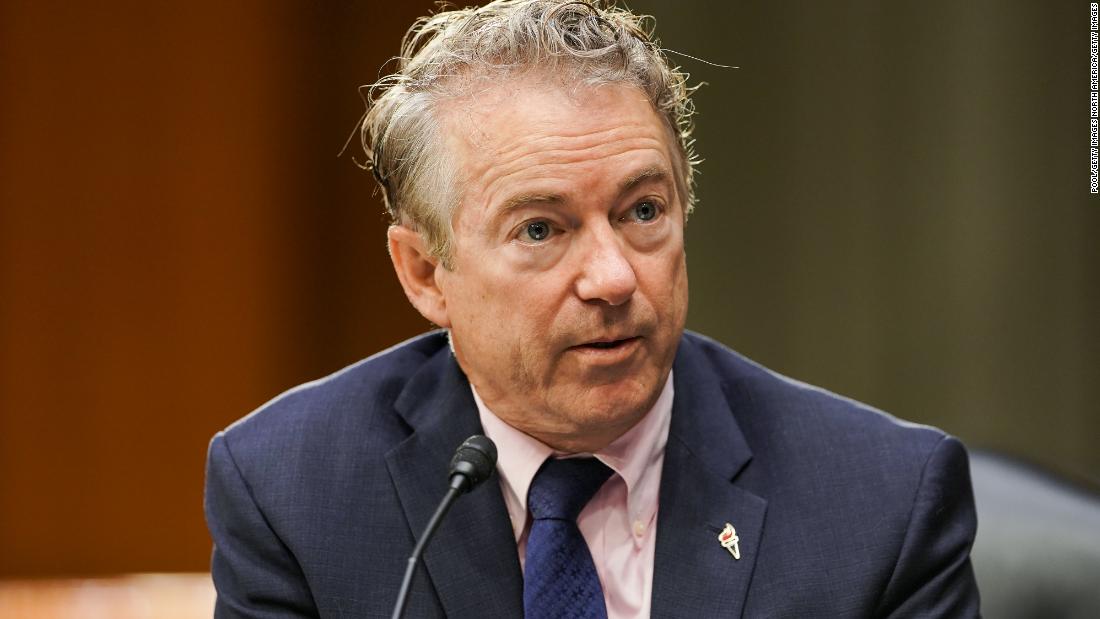 Thursday arrived with the news, first reported by the Washington Post, that, as the Post put it, “his wife bought stock in Gilead Sciences — which makes the antiviral drug used to treat covid-19 — on Feb, 26, 2020, before the threat from the coronavirus was fully understood by the public….”

That disclosure came 16 months after it was due, which only compounds Sen. Paul’s political pain. The STOCK Act — designed to combat congressional insider trading — requires that such buys be reported within 45 days. The senator’s spokeswoman says the Paul family lost money on the investment, which Kelley Paul made with her own earnings. The delay in disclosure, we are told, was a mere mistake.

The “dog ate my disclosure form” excuse is merely a coda to a symphony of simpering coming from Sen. Paul and other conservatives. I read those explanations in the paper, in part because I love newspapers, but also because Sen. Paul has been benched from YouTube, so I could not see his smiling visage on that platform.

On Tuesday, the video platform put Sen. Paul in the penalty box for a week for posting a video in which he said, “Most of the masks you get over the counter don’t work. They don’t prevent infection.”

That statement, to put it plainly, is not true. Moreover, it violates YouTube’s policy, which prohibits videos that spread public health misinformation including “claims that masks do not play a role in preventing the contraction or transmission of Covid-19.”

First, masks prevent infection. Dr. John Brooks, chief medical officer of the US Centers for Disease Control and Prevention, is one among countless medical experts — infectious disease specialists, epidemiologists — to attest to the efficacy of masks in preventing Covid spread. He told the New York Times in April that “the more people who wear a mask, the more the community is protected and therefore the more you individually benefit. It’s like a herd effect.”

The CDC experts call the protection cloth masks give to others “source control”: the cloth traps droplets from leaving your mouth and prevents them from entering the air. “Upwards of 80% blockage,” the CDC says.
So, the cloth mask you wear helps protect others. What about protecting you from others? The scientists at CDC say that mask quality varies, and that multi-layered cloth protects the wearer better than single layers (duh). Said one report, “Studies demonstrate that cloth mask materials can also reduce wearers’ exposure to infectious droplets through filtration, including filtration of fine droplets and particles less than 10 microns.” (Note: One inch is 25,400 microns, so 10 microns is a pretty tiny droplet).

As a senator, Rand Paul has an absolute right, guaranteed by the Constitution, to say anything he likes on the Senate floor. But a corporation like YouTube also has rights: It is free to set the terms and conditions of its service, just as a restaurant might require a jacket and tie, or post a sign that says “No Shirt, No Shoes, No Service.” That’s the law of the land.

I’m sure Sen. Paul already knew this. And his whingeing (the Brits’ version of “whining,” and a word I wish we’d use more often) is, perhaps, calculated. Somehow, when we weren’t looking, conservatives became whiners. It is unlovely. Conservatives complain the left is too “woke;” I think the right is too weak.

I am old enough to remember when President Ronald Reagan, conservative icon, was shot. The Gipper nearly died, but rather than whine, he courageously joked about it. “Honey, I forgot to duck,” he told First Lady Nancy Reagan. As the medical team was prepping him for emergency surgery, he said, “Please tell me you’re Republicans.”

The GOP, of course, is no longer the party of Reagan. It is the party of whiny, pampered crybabies; over-privileged, coddled conservatives who spend their time looking for an excuse to whimper about how oppressed they are.

The former President, Donald Trump, of course, is the Grand Poobah of boohoo. He whines and lies about the election he lost, about fraud that never happened and about his coverage in the media. For all I know, he’s still kvetching about low-flow toilets.

Worst of all, perhaps, Trump complained and prevaricated about the severity and danger of Covid-19. But when he contracted the virus, taxpayers airlifted him to Walter Reed to receive state-of-the-art treatment that most Americans didn’t have access to — including remdesivir, the antiviral drug whose maker Rand Paul’s wife invested in.
My grandfather wore a mask: a gas mask, fighting for our freedom in the trenches of Europe. That’s something Trump, whose infamous “bone spurs” kept him out of the military draft during the Vietnam War, would know nothing about.

My message to Sen. Paul, Mr. Trump and every right wing diva with the vapors of victimhood: Toughen up, buttercup. And while you’re at it, try telling the truth. Wear a mask. Get a vaccine. Love your neighbor.