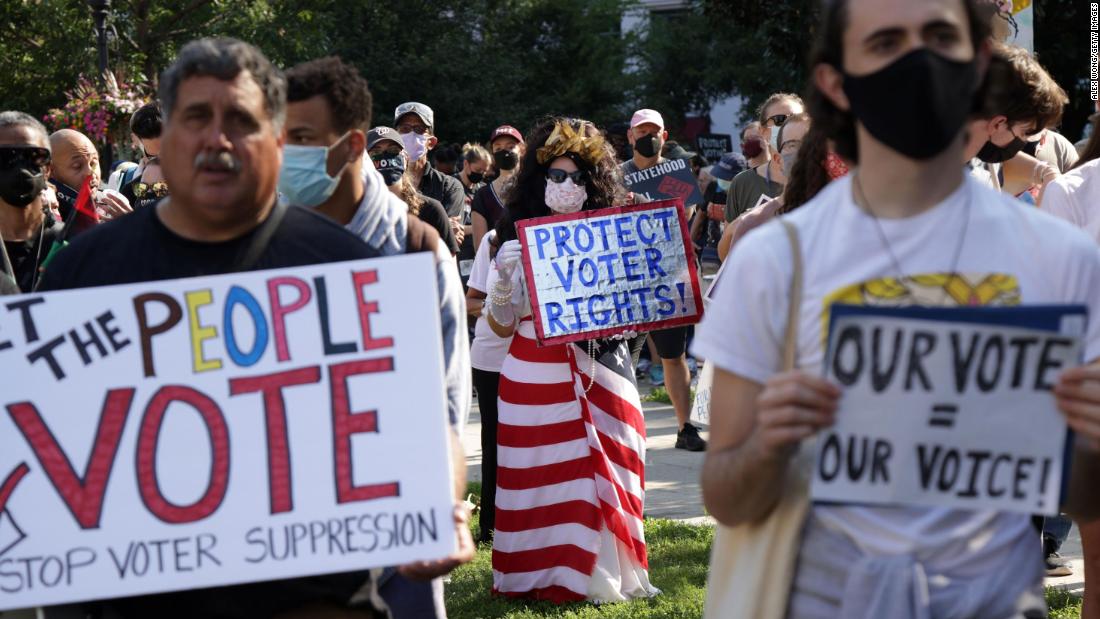 However, we often forget that the “Big Six” were in fact “Top Ten,” for the group had expanded in the weeks before the march to include four White men. Three of them — Mathew H. Ahmann, Rev. Eugene Carson Blake, and Rabbi Joachim Prinz — were prominent religious leaders. The fourth, Walter Reuther, was a labor leader.
Although, regrettably, no women were included in the “Top Ten” or given the opportunity to address the crowd through long speeches as the men did, Daisy Bates, president of the Arkansas NAACP, talked briefly and several other women made notable musical contributions. Joan Baez led demonstrators in a rousing rendition of ‘We Shall Overcome.’ The gospel singer Mahalia Jackson not only sang but also played a pivotal role in the proceedings by calling out to a hesitant King, “Tell them about the dream, Martin,” emboldening him to abandon his prepared speech and launch into a rousing improvisation.
It was not only those who were on the stage that day who understood the impact of allyship. The crowds also reflected the coming together of people of different races, genders, faiths and backgrounds to support the cause of justice, freedom, and jobs for all. It is estimated that around 20-25% of the 250,000 marchers were White. In a nation in which Whites still constituted more than 88% of the population, this was a small start, but the fact that the crowd was, undeniably, visibly diverse sent a powerful message: the dream that King described was for everyone.

Civil rights allyship was largely based on faith. In local churches, synagogues and mosques people came to a shared understanding of suffering and salvation and heard the call of some religious leaders to join the fight for justice.

Faith, in its broadest sense, is still a common denominator among those who respond to that call; even Americans who do not identify with any particular creed are often moved to action by a deep-rooted belief that we are all bound together by our common humanity.

Today, as we continue the long struggle for racial equality in an increasingly polarized society, we must not forget that we have a proud tradition of allyship on which to draw. By openly celebrating the allies of the past, we inspire young people to follow their lead, we recognize the value of collaboration and we remind ourselves to cherish the allies of the present.

And there are more and more of them to cherish. Following the murder of George Floyd on May 25, 2020, for example, Black Lives Matter (BLM) protests against racism and police brutality across the United States were attended by large numbers of very diverse supporters. Research carried out by Professor Dana R. Fisher and her team from the University of Maryland shows that at BLM marches held in Los Angeles, New York City, and Washington, DC, last June, 54% of the participants were White.

Such figures give us reason to hope for a better future; if every American can see themselves reflected in the movement for equality our ranks will surely continue to grow. But we must not take anybody’s ongoing support for granted. In these daunting times, we should redouble our efforts to build bridges between communities, not ditches. From school curriculums to policy documents, we must prioritize measures designed to help citizens from every racial, ethnic, political and economic group to find common ground. So much unites us. We all have fears. We all have dreams. We all love our children and our country and want to see both flourish.

Martin Luther King, Jr. made an unforgettable contribution to the March on Washington and to the policy successes that stemmed from it, but he was also part of not just the “Big Six,” but the diverse “Top Ten.” Today the fight for racial equality is once again led by a loose coalition of activist groups and their allies. The struggle now takes place online as well as on the streets and in the houses of Congress. We don’t need to wait for a lone prophetic voice to emerge. Whatever the color of our skin, gender or creed, if each one of us articulates our personal vision of justice, we will create a combined chorus that cannot be ignored. Our collective call for change will be more powerful than six, 10, or even 250,000 voices.

For what is more important than any number is the one thing we can never quantify, but that counts more than anything else — love.