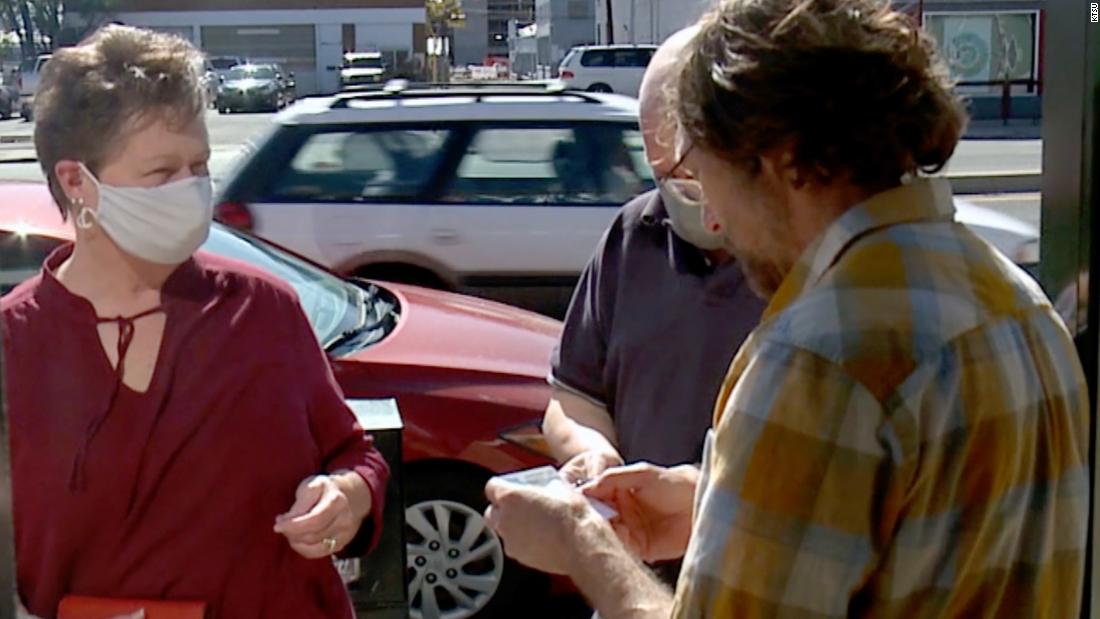 In New York City, Mayor Bill de Blasio correctly said masking is a secondary concern when “the whole ball game is vaccination.” And he is acting on it, announcing Tuesday that the city will require proof of vaccination in the form of a health pass for entrance into gyms, restaurants, and indoor entertainment venues. The city will begin enforcing the program — the first of its kind in a US city — on September 13, he said.

It’s a necessary and overdue step. But why aren’t more cities and states taking it? And more importantly: Why isn’t President Joe Biden?

Nearly a year and a half into the Covid-19 pandemic, and as a new and highly contagious variant rages, you’d think that our politicians would be getting better at navigating it.

And a few are — certainly the competence of the Biden administration’s vaccine rollout stands in sharp contrast to the chaos of Donald Trump and his Covid toadies with their science denying, disinfectant-injecting suggestions, and staff outbreaks. But even somewhat sensible leaders are still refusing to fully follow the science and implement commonsense rules to protect public health.

Even now, too many of them are putting politics — and what they seem to assess to be their own political futures — ahead of making the difficult but necessary calls to keep us all safe.

The latest example is New York Gov. Andrew Cuomo, who on Monday said that he is asking private restaurants and bars to require proof of vaccination for entry. He’s right — they should. But why place the burden of creating sensible public health mandates on private businesses? Cuomo is, after all, the governor. If he believes, as he says, that it is in the “best interests” of these businesses — and ostensibly the public — to have inessential indoor events reserved for the vaccinated, why not make that the policy of New York state?

The answer may be that Cuomo, who is also facing ongoing allegations of sexual harassment and a scathing new report finding those allegations credible, fears a political backlash.

Conservatives set up early opposition to requiring “vaccine passports”– proof of vaccination before one could attend a concert, dine indoors, go to a bar, fly on an airplane, take a cruise or enter a stadium. And many liberal public officials simply bowed to that opposition.

As the Delta variant ripped through the country, they spent the past few weeks dithering even about mask mandates, debating whether and how widely to impose them instead of homing in on vaccine mandates, which correctly expand the liberties of those who take positive steps to protect themselves and others, and impose limitations only on those who refuse to.
The fact is, despite weeks of media fearmongering about the vaccinated continuing to be at risk, fewer than 1% of fully vaccinated people have experienced a breakthrough Covid case. The overwhelming majority of deaths and hospitalizations have been of the unvaccinated.

There is an obvious and simple solution here, and it’s partly what Cuomo wants restaurants to do on their own: Require proof of vaccination for anything that is inside and nonessential, as well as for all public sector jobs and those that pose a high risk to a vulnerable population — health and care workers, for example. For essential activities — grocery shopping, taking public transportation, going to the doctor — universal masking should be required, as the current honor system of “mask if you’re not vaxxed” is obviously ineffective.

This model (you could steer away from the politicized “vaccine passport” and call it a health card instead) allows for a fair balance of protecting public health and protecting individual freedom.

It’s more or less what the French have just done: Last week, France’s parliament passed a law that requires a “health pass” showing proof of vaccination or a negative PCR test to enter restaurants and bars and for travel on long-distance trains and planes.
It has been controversial (though it spurred a wave of new vaccinations), but it’s also the only sensible path forward in a country like the US, where the vaccine is now widely available, but significant chunks of the population say they will simply not get vaccinated — and where those unvaccinated people are driving illness and death across the nation.

It is absolutely a person’s right to refuse vaccination, and our regulations have to preserve bodily autonomy. But it is not a person’s fundamental right to go to the club or eat inside at the restaurant of their choice, if their doing so poses a health risk to those around them.

Which is why it’s so maddening to see politicians shirking their duties here. Cuomo is hardly alone in that — not a single state, including any of those with strong Democratic majorities, has instituted a vaccine requirement for all inessential activities.

Biden holds some responsibility here, too. Last week, he announced that federal employees must attest to being vaccinated against Covid-19 or face strict protocols — though officials were quick to point out that it was not a “mandate.”
The administration apparently sees vaccine mandates as such a hot-button issue that they are reportedly refusing to lift the ban on travelers from the EU because doing so sensibly would require asking European travelers for proof of vaccination — a line Biden apparently doesn’t want to cross, likely for fear of a right-wing backlash.
In the meantime, the Republican Party is swinging hard the other way, making it increasingly impossible to institute rational public health measures in red states. Nine states now outlaw vaccine mandates from businesses and employers (so much for the Republican creed of keeping big government out of private business and letting private business owners run their businesses as they see fit).
The two states leading in Covid infection numbers are Texas and Florida; combined, those two states account for one-third of last week’s Covid cases, according to White House pandemic response coordinator Jeff Zients. Both are led by Republican governors who have signed laws banning both vaccine and mask mandates.

Why are most blue-city and blue-state leaders taking such modest half measures? The mayors of Washington, DC and San Francisco have reinstated mask mandates, for example, but have not required vaccination for indoor dining.

Unfortunately, mask mandates are not particularly useful for indoor dining, given that the whole of the restaurant removes their masks to eat. The nation has a more effective solution available to it, and it’s absurd we aren’t taking full advantage of it.

The truth is that vaccine requirements are divisive in the most literal sense: There’s a roughly half-half split between Americans who support them and those who don’t. There’s an opportunity here for Democrats and those who care about public health to make the case that these mandates would allow many more of us to return to normal life and would save a great many lives in the process.

And there’s an opportunity for Democratic leaders in blue states to lead the way.