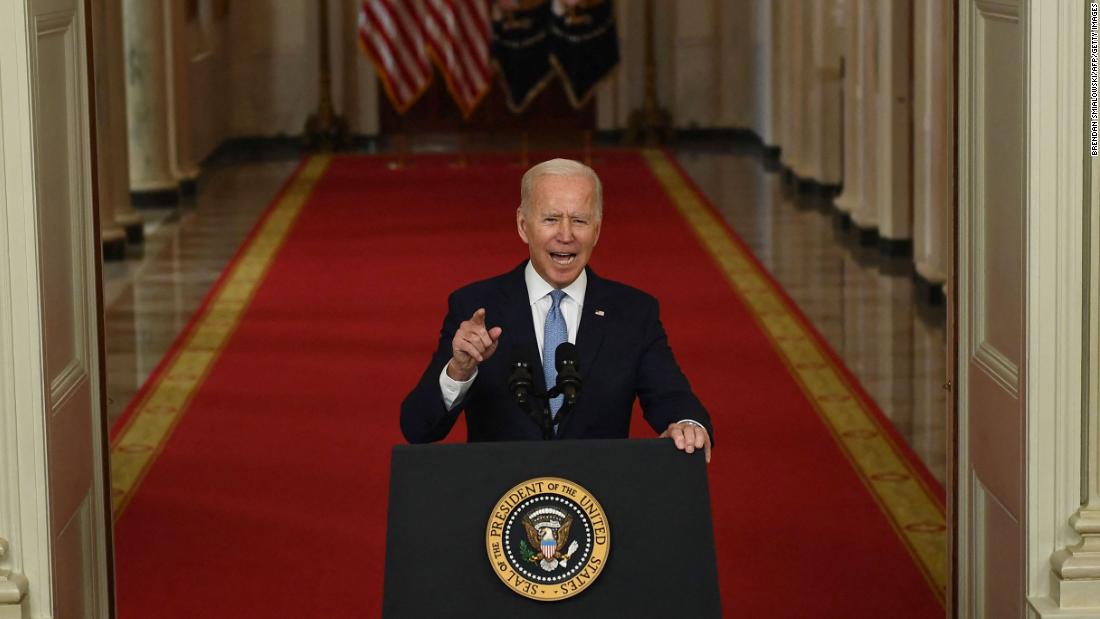 Indeed, Biden’s remarks were not directed at allies, adversaries or even Afghans — but at the American public who, according to the latest polls, seems to be losing its trust in the President on a number of issues, including Afghanistan.
In the eight months of his presidency, Biden has never spoken as forcefully and emotionally as he did Tuesday in defense of his decision to end the war in Afghanistan, a day after the last American military plane left the country. From beginning to end there was little modulation in his voice, no effort to lower the decibel level. It was as if he wanted to project the control, assuredness and confidence that many of his critics found lacking during the chaotic process of withdrawal. The President refused to concede any ground on that issue and tried to counter the arguments of those who claimed he could have started the evacuation earlier, kept forces there longer and set an arbitrary deadline for withdrawal. Indeed he described the evacuation as a near miraculous operation — the largest airlift by any country in history.

At times seemingly defensive and annoyed while defending the withdrawal, the President sought to shift the responsibility instead to just about everyone else. Biden referred to the peace deal signed in Doha, Qatar, last year between his predecessor’s administration and the Taliban as if he had no choice but to respect it. He also blamed the response of Afghan national security defense forces, which he erroneously estimated at 300,000 troops when the data has been deemed questionable even by a US watchdog. He also criticized former Afghan President Ashraf Ghani for fleeing the country, the untrustworthy and unreliable Taliban that he intends to hold accountable, and critics who he rightly believes do not grasp the true costs of a continued “low-grade” deployment.

The President clearly wanted to give a presidential speech to mark the end of America’s longest war and to avoid a wonky to-do list for the challenging follow-up that might be more appropriate for a Secretary of State.

Biden dealt perhaps understandably with much of the unfinished business in Afghanistan — what to do about remaining Americans; what about Afghans at risk; how to deal with the Taliban; and what about humanitarian assistance.

Paradoxically the one issue that required more detailed comments from the President and will be treated most harshly by his critics was the issue Biden himself identified as the only vital national interest America has in Afghanistan: How to protect the homeland from terror attacks.

The President referred again to the over-the-horizon counter-terror capability, praised the use of it in last weekend’s US airstrike against an ISIS-K planner and made the general claim that the world had changed and that Afghanistan was not the only source of jihadi activity. It was an unsatisfying explanation, especially since there’s little doubt that America’s counter-terror task in Afghanistan will be more difficult though not necessarily impossible without an on-site presence.

A speech for America

If US allies were looking for apologies and reassurance, they surely weren’t going to find it in Tuesday’s speech. Biden reached out a couple of times empathetically to the Afghan people and vowed to continue to help those Afghans at risk. There was a quick reference to human rights, a mention of competition with China and Russia and a stern warning to terrorists that America will neither forget nor forgive. But this was not a foreign policy speech.

Indeed, it was a quintessentially American address directed at a domestic audience, especially veterans. Here Biden was the most eloquent, effective and emotional referencing his late son Beau’s military service, the rate of suicide among veterans, the stress and strain on families, and the number of veterans wounded and killed in Afghanistan. It will resonate as will his blast at critics who call for a low-grade, low-cost, low-risk deployment and don’t take these sacrifices and hardships into account.

Despite its imperfections, this was a powerful and evocative speech by a President who believes to the depths of his soul that, for the benefit of American national interest, the good of the American people and those who serve, the decision to end America’s longest war was the “right decision; the wisest decision and the best decision.”