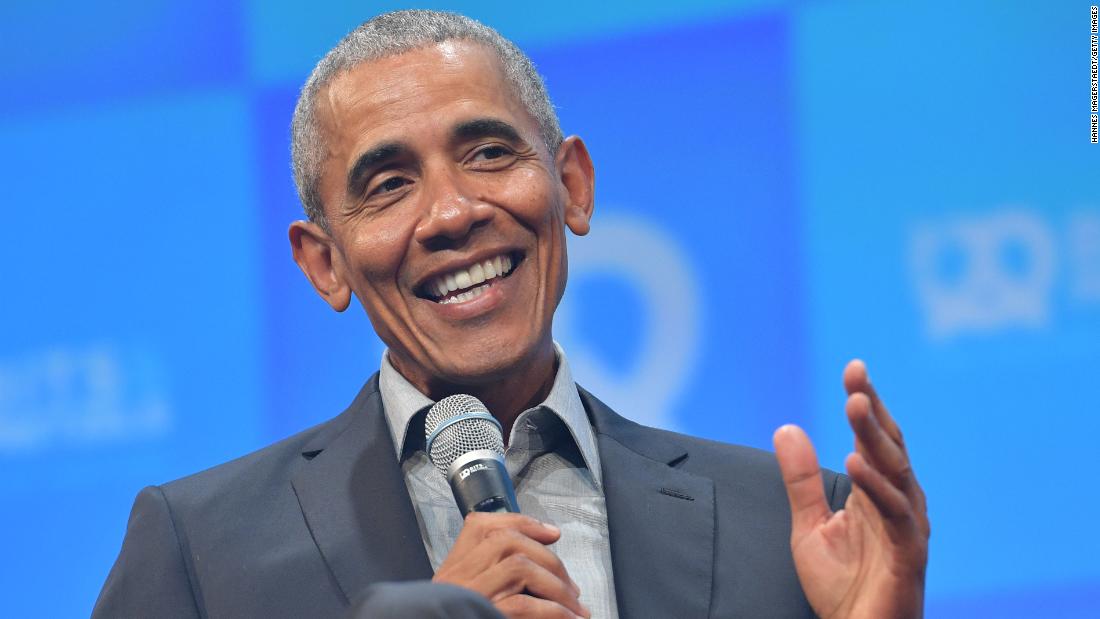 I remember watching the 43-year-old Illinois state senator deliver the 2004 Democratic National Convention keynote at Boston’s FleetCenter on July 27. Obama, who looked so much younger than his age, spoke for 17 minutes about the virtues of American democracy.

That speech, which made him a political superstar, deftly introduced autobiographical themes that would become familiar beats in Obama’s public narrative. Obama presented his biracial background — as the son of an immigrant Kenyan economist and a White anthropologist with Kansas roots who met as students in Hawaii at a time when interracial marriage was illegal in parts of America — as a lens through which to view the dynamic racial progress the nation had not yet fully achieved but remained committed to.

In retrospect, parts of the speech that pushed back against dividing America into red states and blue states appear now naïve or hopelessly romantic, cynical even, considering the deadly and racially charged partisanship of our times.

But the power of Obama’s keynote speech — and his presidential campaign four years later — was the way in which it tapped into democratic aspirations best reflected in the Black freedom struggle he took pains to both celebrate and, at times, distance himself from. Obama delivered a speech from America’s cradle of liberty that could only be given by a Black politician able to acknowledge historic divisions of race, class, gender, religion and sexuality, while crafting a vision of an American citizenship capable of transcending these divides.

Obama offered his personal biography and political ambitions as a bridge between past and contemporary civil rights activists. More than that, he positioned himself as a political leader whose rhetoric and vision framed the nation as a patchwork quilt of diverse communities that grew stronger as they recognized the common ground of citizenship and dignity that united them.

As he approaches 60, Obama’s hair has turned grayer, he looks even thinner now than he did as commander in chief and one can see the impact of time — and being President — in the wrinkles and creases that appear visible on a once unlined face.

Last summer, Obama said that “Black Lives Matter” but decried efforts to “Defund the Police” as bad politics that alienated potential allies.
Yet, time out of office has radicalized the preternaturally cautious Obama into calling for an end to the filibuster, if that’s what’s required to preserve democracy. His characterization of the filibuster as “another Jim Crow relic” offered further proof that Obama 2.0 displays a willingness to confront America’s long history of structural racism with the kind of bracing candor he rarely embraced as President.

Obama continues to serve as a Rorschach test for the American political imagination. He likely always will. The first Black president didn’t so much as flip the script of American politics as write himself into it. Obama proved to be a fervent believer in American exceptionalism.

Boston launched Obama’s national political career, setting the stage for his successful campaign for the US Senate that he would win that November and for his presidential campaign, which he announced from the Illinois State House in February 2007.

Obama’s keynote speech turned his memoir “Dreams of My Father,” first published in 1995, into an instant bestseller. He followed this up with “The Audacity of Hope,” a more conventional but still insightful book about the sources of civic nationalism that united Americans far more than they divided us.

He took the title of his second book from a phrase used by his then pastor, Jeremiah Wright, the fiery Black Liberation theologian who headed Trinity United Church in Chicago. Wright came from a tradition that criticized White supremacy with the kind of candor that — although very much mainstream in 2021 — proved scandalous when clips were played by conservative news outlets during the presidential campaign.

Obama’s pastor problem took the lid off the most explosive issue of the 2008 Democratic primary contest and the subsequent general election: a Black man was running for president and had a good chance to win.

His candidacy blew the lid off far-flung conspiracy theories that would move from the margin to the center of American political discourse over the last 15 years. Fabricated rumors that Obama was a secret Muslim, had been born in Kenya and educated at an Islamic madrassa as a young boy in Indonesia abounded. Clips of Wright excoriating America’s imperial domestic policy seemed to confirm that Obama — handsome, telegenic, and brilliant — was a Trojan horse (his middle name was Hussein after all) sent by America’s enemies to destroy us from within.

Obama pushed back against this characterization by delivering a bravura March 18, 2008 “race speech” in Philadelphia’s Constitution Hall surrounded by a backdrop of American flags that unsubtly signaled his fealty to the American dream.

In that speech, Obama portrayed both Black anger over racial slavery and Jim Crow and White resentment against affirmative action as morally equivalent. He refused to dissociate himself from Pastor Wright (but did several days later) and he recounted that his own White grandmother (Toot, short for Tutu, in the affectionate Hawaiian parlance) expressed fears of Black men that made him cringe. The speech was an enormous success, touted in some quarters as the most significant speech on America’s racial divide since Lincoln.

Obama went on to be elected in what still represents the equivalent of a modern-day landslide, with 43% of White voters forming part of a new political coalition: he was also backed by 95% of Black voters and two-thirds of LatinX voters.

Obama’s victory ushered in America’s Third Reconstruction, a period that continues to this day and has been marked by stunning and unprecedented instances of racial progress. But it has also touched off a fierce backlash symbolically represented by Donald Trump and his MAGA followers. Black people in America experience voter suppression, racially disparate impacts of the Covid-19 health pandemic, police violence against their communities, mass incarceration and the stubborn persistence of racial segregation and economic impoverishment.

By 2020, even Obama seemed to come around and understand the existential dangers posed by the resurgence of White nationalism in American politics. Sixteen years after the fresh-faced young state senator delivered a soaring, optimistic keynote speech in Boston, the now-former President delivered a virtual address that warned that racism might produce the end of the republic.

America’s long, rough and tortured road toward a renaissance that might achieve Black dignity and full citizenship has produced thunderclap historical moments. The ratification of the 13th amendment on December 6, 1865, that abolished racial slavery was one. The Brown v. Board of Education school desegregation decision announced by the Supreme Court on May 17, 1954, was another. Barack Obama’s November 4, 2008, presidential election victory proved to be the third of these hinge points in our nation’s history.

Each of these moments ushered in periods of reconstruction; political, legislative, legal, and personal soul searching that had far-reaching consequences, not only for their eras but most especially our own.

Obama’s victory, against the backdrop of economic recession, a mortgage crisis that disproportionately impacted Black Americans, and wars in Afghanistan and Iraq inspired domestic and global celebrations and outsized political expectations.

Obama proved to be the last American President to lead under the hard-fought national civil rights consensus on Black citizenship that had been rhetorically supported by commanders in chief since John F. Kennedy. This bipartisan era compelled Democrats and Republicans to offer support for the Martin Luther King Jr. federal holiday and acknowledge the importance of Black History Month, and it led to the creation of the National Museum of African American History and Culture, the first-ever built with federal funds.

Beneath such public displays of unity around race matters lay policy divisions over affirmative action, racial integration in public schools and neighborhoods, racial disparities in health, wealth, and employment and culture wars over the very meaning of American identity, democracy and citizenship that roiled Obama’s presidency before exploding during the Trump Era.

The trauma of the past four years, most notably the partisan response to a health pandemic and rioting at the US Capitol, makes many nostalgic for the era that the young Barack Obama thrived in. Such longing yearns for a period before the Birther movement, QAnon, White riots and GOP-led voter suppression and anti-Critical Race Theory legislation. Before Trump conjured the Big Lie of a stolen presidential election, there appeared an alternative course for the nation to embark on.

Barack Obama’s enduring power is his ability to allow us to imagine ourselves as a better country, society and people. As a young state senator, presidential candidate, and commander in chief, Obama called America to be its aspirational best.

The Obama campaign’s signature innovation was not the use of social media nor the trappings of celebrity that eventually consumed aspects of the American presidency. Obama’s ability to tell Americans a fresh interpretation of their own national story helped to make history. Obama’s narrative explained that “what began as a whisper has now swelled to a chorus that cannot be ignored — that will not be deterred, that will ring out across this land as a hymn that will heal this nation — repair this world and make this time different than all the rest.”

The poetry of these words continues to resonate, now more than ever, within Americans who recognize that, however flawed and imperfect a political vessel Obama turned out to be, the freedom dreams he expressed at his best are bigger than any one political leader and can thus never be betrayed.

Obama called us to be our best selves in a manner that allowed supporters to criticize, empathize with and celebrate his successes and shortcoming as our own. He imagined America as a large national family where even political opponents could find kinship in their love of civic ideals rooted in a generous reading of the founding documents as expansive enough to include all those who had been left out at the time of its writing.

Keenly aware of the historic divisions, conflicts and disagreements that perpetually threatened to undermine the republic, for a brief period Obama allowed the world to see America as a place of endless possibilities. His 60th birthday calls us to reflect on the seemingly vast distance between that time and our own, as well as the steps necessary to renew the nation’s democratic faith and confidence in the ability to achieve the country we have always imagined ourselves to be.