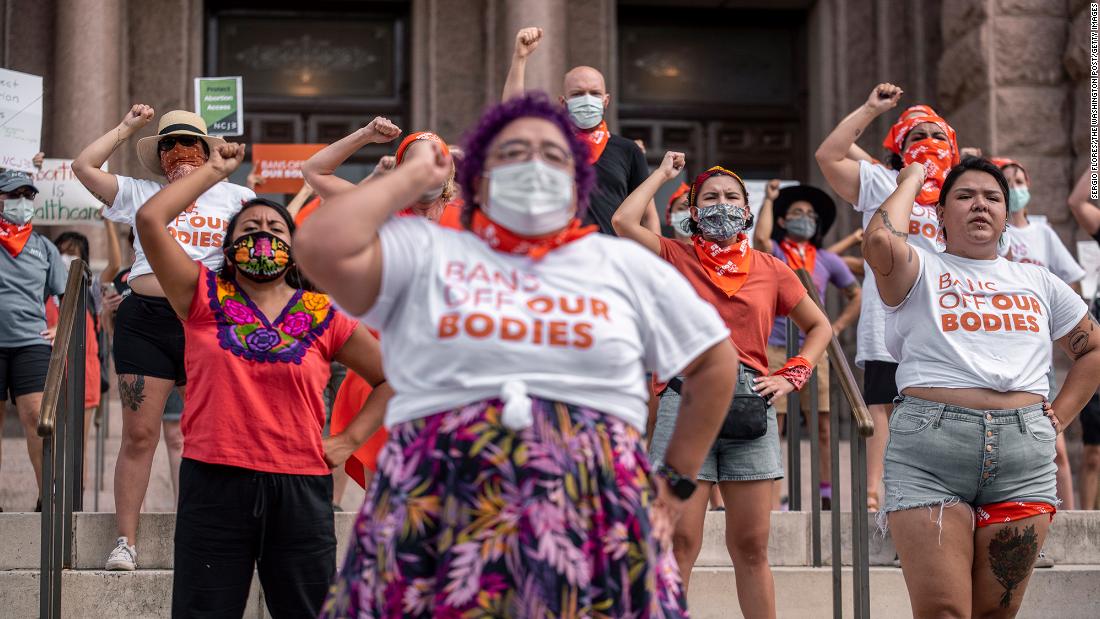 That’s because Texas, with a measure signed into law by Republican Gov. Greg Abbott, has authorized “any person” who does not work for the state or city government to bring a civil lawsuit against any doctor who performs an abortion after six weeks — or anyone who aids or abets in the procedure. At the same time, Texas has rewritten the rules of civil lawsuits, changing where abortion providers can be forced to go to court, whether they can receive attorneys’ fees and when they have standing to sue on their patients’ behalf.
This means that abortion providers could literally be sued out of business. The same goes for anyone who “knowingly” helps anyone seeking an abortion. It’s no surprise that abortion providers in the state have announced that they will stop performing abortions after six weeks.
It may seem that Texas is using the same playbook as Mississippi, which has a law of its own scheduled for argument in the high court this year. There are crucial similarities: Both laws are gutting abortion rights by exploiting what many view as a weakness in the abortion-rights framework — the idea that states can ban abortion only after viability, the point at which survival is possible outside the womb. In 1973’s Roe v. Wade decision, the Supreme Court pronounced, that point was around 24 weeks of pregnancy.
Bioethicists have questioned whether the viability framework makes sense. And some Supreme Court justices have wondered whether it’s workable given improvements in prenatal care and the chances of ever earlier prenatal survival. But beyond the superficial resemblance, Texas and Mississippi are making very different bets about the court’s conservative majority — and seeking a strategy for the anti-abortion movement to win either way.
Start with SB8, the Texas bill that has made headlines since its passage in May. SB8 is a more extreme version of what’s known as the “heartbeat bill,” banning abortion when a doctor can detect fetal cardiac activity, usually around the sixth week of pregnancy. But Texas lawmakers hesitated to explicitly criminalize so many abortions, especially given the odds of losing in court. Instead, the state blocked state officials from enforcing the law and assigned the law to private citizens, deputizing anyone in the state to sue abortion providers, stop them from performing further abortions and collect a civil payout of $10,000.
It may seem strange for the state to pass a law and then block its own officials from enforcing it, but there is a method behind the madness. Texas is invoking sovereign immunity, a doctrine that limits when private citizens can sue the state. There is an exception to this rule that allows citizens to go after a state official enforcing the law. But Texas is shielding itself by arguing that no state official is allowed to do anything with SB8.
The Supreme Court just bought this argument. Late Wednesday, by a 5-4 vote, the court denied an emergency application to stop Texas’s law from going into effect. The court insisted that it had not reached “any conclusion about the constitutionality of Texas’s law” while simply recognizing that there might be no state official for abortion providers to sue.

But the dissenting justices saw through this pretense. Chief Justice John Roberts questioned the wisdom of allowing the state to insulate itself “from responsibility for implementing and enforcing the regulatory regime.” Justice Sonia Sotomayor called the Texas law “a breathtaking act of defiance — of the Constitution, of this Court’s precedents, and of the rights of women seeking abortions throughout Texas.”

There is nothing stopping other states from following the playbook Texas has developed. Mississippi, the state that produced the court’s next big abortion case, is looking to ban abortions, but that’s where the similarities end. Instead of a heartbeat, Mississippi is proposing fetal pain — which it says (unconvincingly) is possible at 15 weeks — as the new dividing line.

State lawmakers have also courted the kind of confrontation that Texas wants to avoid. Mississippi criminalizes abortion after 15 weeks, which is unconstitutional under current law. But that’s the point: Mississippi believes that the court’s conservative majority will either replace the viability limit or just get rid of Roe altogether. The Supreme Court hasn’t discouraged this kind of thinking. It agreed to hear a challenge to Mississippi’s law — and to decide whether all bans on abortion before viability are constitutional. If the court upholds Mississippi’s law — as many expect it will — then the justices will have no choice but to get rid of viability and potentially go much further.

Mississippi’s gambit may explain why Texas’s law is thus far the only one of its kind, as clever as it is. Many states want to ban abortions, as Texas now can, but it does not stop there. Red state lawmakers are looking for a repudiation of Roe. Denouncing the idea of a right to choose abortion is what anti-abortion voters have longed for. And in practical terms, anti-abortion lawyers cannot seek to ban abortions nationwide if Roe is still the law of the land. Abortion foes plan to ask the court to recognize fetal personhood under the Fourteenth Amendment and thereby make abortion unconstitutional nationwide. Reversing Roe is a necessary step in this process.

It appears that Texas may have devised a genius way of avoiding constitutional challenges. The irony is that with this Supreme Court, red states are not afraid of the federal courts anymore.

In the long run, though, Texas may have the last laugh. Abortion foes seem to believe that the Supreme Court can bring an end to the abortion wars by reversing Roe v. Wade and recognizing fetal rights. History shows us that the opposite is true. The Supreme Court thought once before that it could settle the American abortion wars — in Roe v. Wade. We all know what happened next.