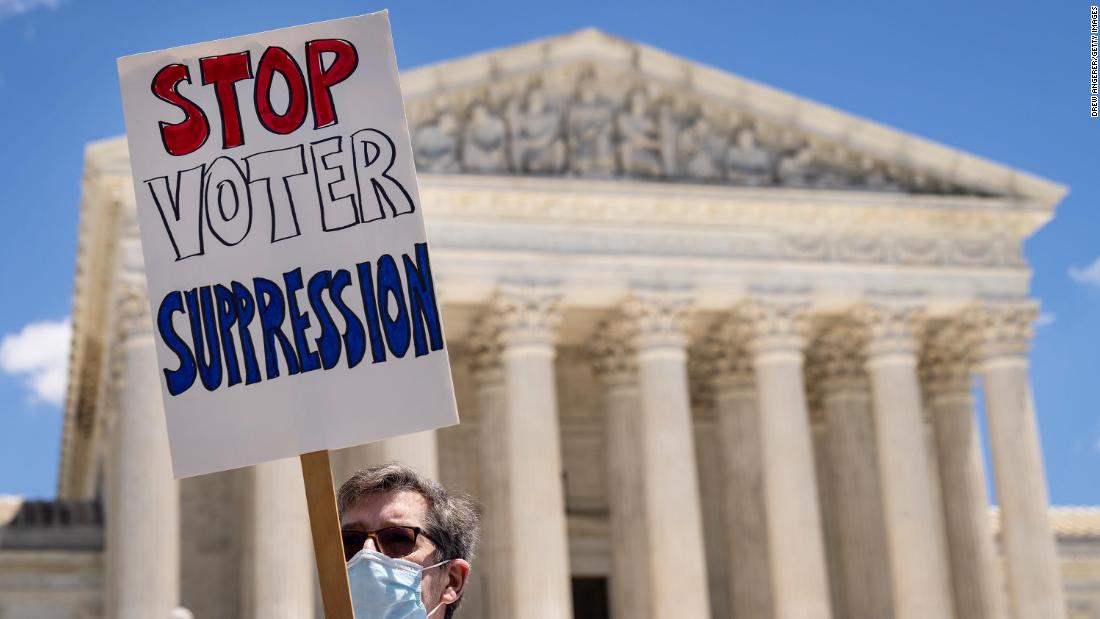 President Joe Biden calls the sweeping bipartisan infrastructure package under consideration by Congress a signal to the world that “our democracy can function, deliver, and do big things.” However, for our democracy to function, it requires not only the building of roads, bridges and railways, but also the guarantee of access and participation in our political process.
A proper democracy vests its power in its nation’s people and their elected representatives. But the current fractured state of our democracy prevents many citizens from exercising their constitutional rights and making their voices heard. Just this year, state legislators around the country have introduced more than 400 bills that will make it more difficult for Americans to vote, and 18 states have enacted 30 new laws doing precisely that, according to the Brennan Center for Justice.
Whereas the current infrastructure deal promises significant long-term investments in our country’s transportation and renewable energy, the assurance of a healthy, fully participatory democracy remains elusive. We must broaden the conversation on what is considered infrastructure.

We cannot limit ourselves to seeking improvements to our roads, bridges and public transit. Although our languishing transportation and public works system certainly require repair and modernization — and racial equity must be a centerpiece of that — it would be a huge mistake to ignore the perilous state of our democracy. The array of federal investments under consideration will not have the grand impact intended on our economy and our social structures if too many of our citizens are still excluded from participating in decision-making on these and other vital issues of the day.

We urge the White House and Congress to reconstruct our deteriorating voting infrastructure and counter the almost daily assaults on our democracy which we are witnessing around the country. Empowering partisan poll watchers, restricting mail-in ballots, and reducing early voting impose additional barriers on citizens who are already severely hampered in exercising their right to vote. Unfortunately, for too much of the country, the trend keeps moving in the wrong direction.
Let’s be clear. Restricting access to voting is an existential threat to our democracy. Biden recently called today’s voter suppression efforts a “21st century Jim Crow assault” that is “real. It’s relenting.” He is right: “The denial of full and free and fair elections is the most un-American thing that any of us can imagine.”
Fifty six years ago this Friday, August 6, former President Lyndon B. Johnson signed the Voting Rights Act, banning vicious measures and schemes that excluded Black Americans from participating in our democracy. That law — widely considered the most consequential civil rights law ever enacted — had strong bipartisan support. In fact, 30 Republican senators voted for its passage. The Voting Rights Act continued to have bipartisan support through its four reauthorizations, signed into law each time by a Republican president. Tragically, the Supreme Court has eviscerated enforcement of this law, gutting the heart of the act eight years ago and substantially weakening another key provision just this term.

That strong support from both sides of the aisle for the act must continue today. It is simply unfathomable that voting discrimination outlawed by Congress over half a century ago is allowed to run rampant in its modern-day form today — and in a country that holds itself out to the world as the beacon for democracy.

Additionally, it is of the utmost priority that the US Senate and the US House of Representatives act immediately to rebuild and expand our election infrastructure so that everyone eligible is able to participate and have their voice heard. Congress should move forward with legislation to do precisely that.

Preventing discrimination in voting and ensuring equal access to the ballot box should be a cornerstone of our democracy, not a constant struggle. As we’ve seen in Maine, Vermont and Kentucky, it is possible to pass bills that advance voting rights. Whether it is Kentucky expanding early voting and in-person voting options or Vermont ensuring every registered voter automatically receives an absentee ballot for statewide general elections, the pathway to more expansive voting measures on behalf of the American people is possible and within reach.
In signing the Voting Rights Act of 1965, Johnson recognized its significance not only for Black people, but for all Americans. At the time, he said, “It is also a victory for the freedom of the American Nation. And every family across this great, entire, searching land will live stronger in liberty, will live more splendid in expectation, and will be prouder to be American because of the act … that I will sign today.”

Our leaders today must recognize the value of voting rights for all as foundational to the success of our nation. In the spirit of the strong bipartisanship that has enveloped the Voting Rights Act throughout history, we call upon these leaders to seize this moment of exceptional urgency and act in unison to ensure all Americans have a voice in our future by strengthening the infrastructure of our democracy.