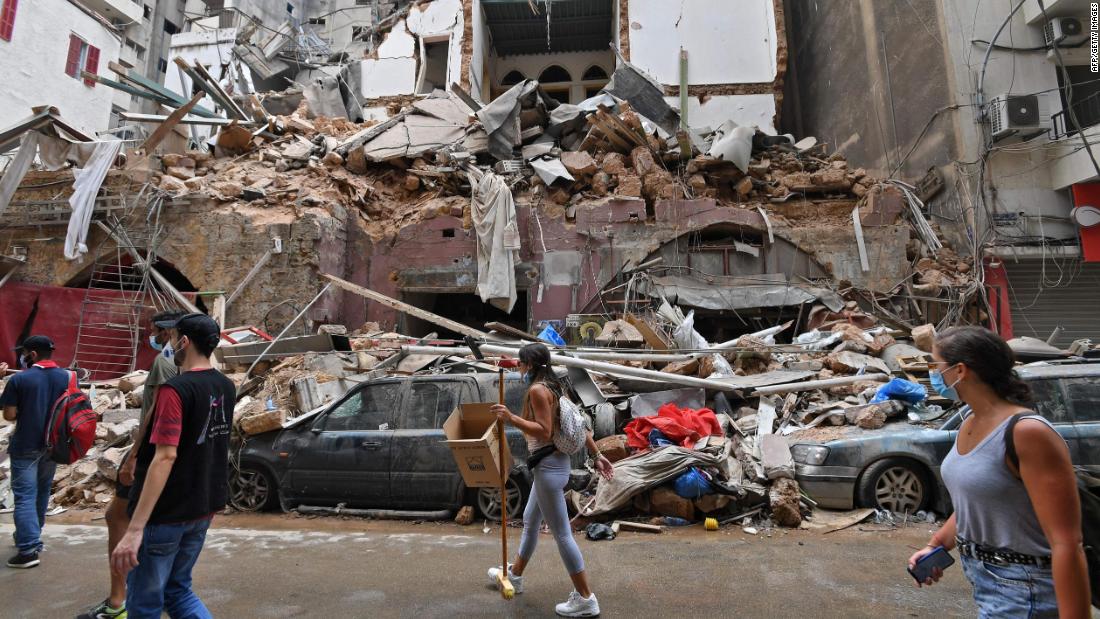 Instead of a moment of reckoning, the explosion deepened Lebanon’s political paralysis — the country has had a caretaker government for nearly a year — and an economic collapse that began in the fall of 2019. The investigation into the blast has stalled, with the sectarian leaders and their political parties closing ranks against a judge who wants to interrogate several powerful officials.
The judge is probing why top officials — including senior security figures and judges, ex-government ministers, the former head of the Lebanese army and others — did not take action after learning that 2,750 tons of ammonium nitrate was improperly stored in a warehouse at the port for six years. The chemicals, which had been seized from a ship, ignited for unknown reasons and caused one of the largest accidental non-nuclear explosions in history.

Lebanon’s political paralysis, financial crisis and stalled investigation might seem like separate problems, but they’re all the result of three decades of systemic negligence and lack of accountability, since the end of a 15-year civil war in 1990.

Soon after the disaster, Lebanon’s sectarian leaders resorted to a strategy of obfuscation refined over decades: they blamed rival politicians and a corrupt system outside their control. “I am not responsible,” Lebanese President Michel Aoun told reporters a few days after the explosion. “I don’t know where it was put and I didn’t know how dangerous it was.”
Relatives of the dead, survivors and human rights groups called for an international investigation, led by the United Nations, saying they have no faith in the Lebanese judicial system to hold powerful officials accountable. But Lebanese leaders rejected these pleas and have put up obstacles since the start of the domestic investigation.
The first investigating judge was removed by Lebanon’s highest court in February, after he summoned for questioning three former government ministers (who still serve in parliament) and Hassan Diab, still serving as the country’s caretaker prime minister after he and his cabinet resigned a week after the port disaster. It’s clear that only an international investigation would provide real accountability, given that Lebanon has a history of inconclusive investigations, political interference that undermines the judicial system and impunity for top officials and ex-warlords.
In early July, a new investigating judge appointed in the case, Tarek Bitar, summoned the same officials, along with several security chiefs. Bitar is now locked in a battle with leaders of parliament and some of the dominant sectarian parties over lifting the immunity of various officials.
In a bigger challenge to the country’s sectarian leaders, Bitar has asked parliament to lift the immunity of three current members who had served in previous governments and might have known about the chemical stockpile at the port. The judge also wants to question two of the country’s most powerful security chiefs.
Families of the victims have tried to increase pressure on political leaders by protesting near parliament and outside the homes of various ministers, sometimes clashing with security forces. But although the families have significant public and media support — the news media often describes victims of the explosion as “martyrs”– the ruling class has so far turned a deaf ear to their appeals.
The debate over the investigation has been subsumed by the larger political paralysis and an economic collapse that the World Bank has said is “likely to rank in the top 10, possibly top 3” most severe financial crises in the world since the 1850s. The crisis began in the fall of 2019, when Lebanese banks ran out of dollars to pay their depositors and imposed arbitrary capital controls limiting withdrawals to several hundred dollars a month.
Thanks to hyperinflation and a lack of dollars to pay for imports, the majority of Lebanon’s six million people are struggling to find food, medicine, fuel, electricity and clean water. According to a recent United Nations survey, 77% of households do not have enough food, or money to buy food. Since the fall of 2019, the Lebanese pound, which has been pegged at about 1,500 to the dollar since 1997, has dropped 15-fold in value on the black market.
“Lebanon is a few days away from the social explosion,” Diab, the caretaker prime minister, warned at a meeting with foreign diplomats on July 6. He pleaded for international aid to help the country. In 2018, the European Union and other countries promised $11 billion in loans and other aid. But they have demanded economic reforms and transparency in Lebanon’s government and the opaque central bank. The ruling elite so far has refused to budge.

Despite the currency collapse and shortages of basic necessities, Lebanon’s sectarian leaders can’t agree on forming a new government because they’re still haggling over control of various ministries and state resources.

Last week, Aoun, the president, selected the third nominee for prime minister in less than a year: Najib Mikati, one of Lebanon’s richest men and an ex-premier. If Mikati manages to overcome the factional squabbling, he could secure some foreign aid and stabilize the economy until parliamentary elections are held on a still-to-be-determined date next year.

But his government would likely oversee elections that would favor the country’s dominant sectarian parties. These include former Prime Minister Saad Hariri’s Future Movement, Lebanon’s largest Sunni Muslim party, along with its two main rivals: Hezbollah, the dominant Shiite Muslim party and militia, and its Maronite Christian ally, the Free Patriotic Movement.

With the country’s sectarian leaders and parties refusing to accept a government led by independent technocrats, Lebanon needs more structural change that would ultimately dismantle its religion-based “confessional” system. This could start with the parliamentary elections, which in the past have been gerrymandered in favor of the sectarian parties. That’s why it’s essential for the new government to adopt a fair election law — and for Lebanese to vote in record numbers.
There is some hope for reform: on July 18, a coalition of opposition and civil society groups won a landslide victory in elections for leaders of one of Lebanon’s largest unions, which represents 60,000 engineers and architects. The independents defeated candidates supported by some of Lebanon’s largest sectarian parties. It’s a small step, and it might not reflect the more complex legislative elections next year, but union elections in the Arab world are sometimes an early indicator of change.
However, the obstacles are still formidable because the Lebanese political system is built on the divvying up of patronage and state resources. That gives the established sectarian parties an enormous advantage over civil society and non-sectarian groups which cannot provide jobs, food, health care and other aid to their supporters.
The sectarian system is rooted in Lebanon’s unwritten National Pact, which was adopted by Lebanese elites when the country gained independence from France in 1943. The agreement decrees that the president must be a Maronite, the prime minister a Sunni and the speaker of parliament a Shiite. Seats in parliament were initially divided on a 6-to-5 ratio of Christians to Muslims, then further partitioned among 18 officially recognized sects. This power-sharing arrangement was one of the causes of Lebanon’s 15-year civil war. The United States, Israel, Syria, Iran and other foreign powers also intervened at various points in the conflict.
When the war ended in 1990, under an agreement brokered by Saudi Arabia and Syria, parliament was expanded and seats were divided equally among Muslims and Christians. Some of the president’s powers were weakened and given to the prime minister and cabinet. While corruption was endemic during the war, it got worse during peacetime.
That’s one reason government formation is so fraught today: the parties representing the three largest sects — Sunni, Shiite and Maronite — often squabble over control of the most important ministries. For months, negotiations stalled because various factions wanted control of the interior ministry, which will oversee the upcoming parliamentary elections, and the justice ministry, which plays a role in the ongoing investigation of the port explosion.
During a popular uprising that coincided with the start of the financial collapse in October 2019, Lebanese protesters adopted the slogan, “All of them means all of them” — a reference to the sectarian leaders and parties that seized power after the civil war. In their struggle for answers and accountability, families of the victims of the port disaster embraced the same slogan. For now, those leaders are holding on to power — and are still acting with impunity.