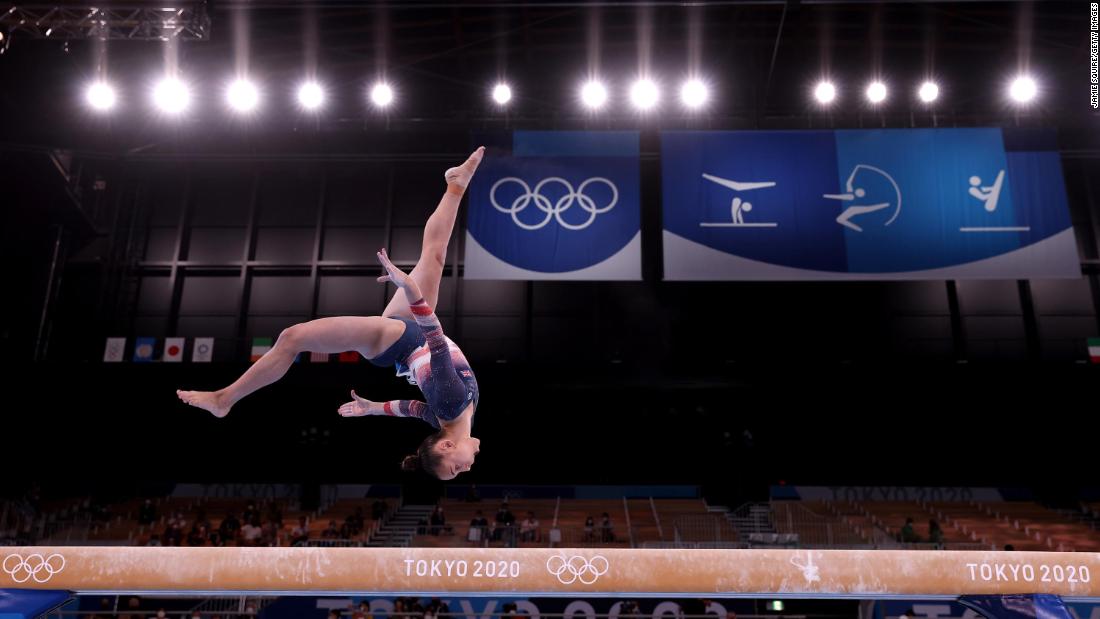 I’m a physicist by training and trade, and as I watch these young super men and women accomplishing feats that are utterly inconceivable that I could personally ever do, it’s clear that the athletes have a more visceral understanding of physics than many of my best students. The athletes may not know equations, like my students do, but they certainly have mastered and understood physical principles at a deep level.

Gymnastics is one sport that always leaves me completely awed. What these very disciplined, young women do on the balance bar is simply incredible. Simone Biles, currently one of America’s sweethearts and an Olympian, although she has pulled out of the team and most individual events to focus on her mental health, packs some incredible power into her jumps.
For instance, in a 2019 video where she dismounts from a balance beam, the power she supplies is impressive (42 kilowatts). An ordinary house uses 1.2 kilowatts on average — that’s the refrigerator, all the electronics, anything electrical. That means that in the very short time she is jumping, she generates the same amount of power that 35 houses are using in an hour. Obviously, she is generating that power for a short time, but it gives you a sense of just how strong her jumps are.
And her colleague Sunisa Lee is a similar practical physics expert. The fact that she won the gold medal for 2021 Olympic women’s artistic individual all-around makes that pretty clear. But let’s look at her mastery of the uneven bars — a serious physics challenge.

Lee’s ability to know the position of both sets of bars and her ability to use how she rotates her body to do a transfixing routine transcends the mastery of physics students. After all, as she moves, she has “kinetic” energy — energy from being in motion — the faster she is moving, the more kinetic energy she has. But there is also gravitational energy. The higher she is, the more gravitational energy she has.

So, as she moves from bar to bar, she transforms between the two kinds of energy. Because the laws of physics say that total energy is unchanged, as she moves from the low bar to the high bar, she slows down and must make that up by pumping her legs and converting the calories from her morning breakfast into faster motion. Dr. Lou Bloomfield, fellow physicist and professor at the University of Virginia, has made a video on the physics of uneven bars.
Probably the best of the events for a physicist to watch is the decathlon, as it incorporates such a wide range of physics principles. The decathlon involves 10 events, from running various distances, to a variety of jumps, hurdles, discus throw, pole vault and the javelin throw.

The physics of running is pretty straight forward — move your feet as fast as you can. But the other sports take a lot more physics knowledge, for instance in the hurdles, you want to clear them as low as you can safely manage. The time in the air, you’re not running, and that slows you down. A good hurdler barely clears each hurdle.

Now for the javelin, you have an entirely different strategy. Aside from the obvious need to launch the javelin with as much speed as possible, the angle is crucial. If you casually asked most physicists about the best angle to get the maximum distance, we’d all say 45° from horizontal. (That was even my first thought, and I’ve been teaching this stuff for decades.) If you launched the javelin at higher angles, it would go higher, but not farther. If you launched the javelin at smaller angles, you’d hit the ground earlier.

However, that’s the answer if you threw it from the ground. But assuming the thrower is a 6-foot male, and if you add the length of the arm, they release the javelin about 7′ above the ground. That changes things. The 45° choice would be fine if the javelin hit the earth 7′ above the ground, but it doesn’t. Instead, it falls that extra seven feet. And if you take that into account, 45° is no longer the right choice.

Instead, the athlete needs to launch the javelin at an angle of more like 34-36° — depending on each athlete’s height. The same physics principles apply when you’re throwing something to a distant trash can. Since the trash can is lower than the hand throwing the object, you can also throw a little harder, with an angle closer to horizontal, and the object will fly farther.
So, we see that the javelin-throwing decathlete knows their physics better than many introductory physics students. The world record for a javelin throw is 98.48 meters (303.4 feet), and it was accomplished by Jan Zelezny in May 1996. We won’t know the result in this Olympics for several days.
Discus throwing is another tricky event, from a physics perspective. The athlete spins around one and a half times before they throw the discus. The discus looks like a lentil and for Olympians, it weighs 2 kilograms for men and 1 kilogram for women.
The trick with a discus is that it must spin like a Frisbee. That gives it stability as it flies. Getting it to spin exactly as it needs to and at the exactly right moment is incredibly difficult. In fact, this particular event requires so much practice that the true professionals tend to be over 30 years old before they master it. The world record is 74.08 meters (237.1 feet) and it was accomplished by Germany’s Jürgen Schult in May 1986. As of this writing, the 2021 final discus results are also not available.

No matter the physics these wonderful athletes have mastered, they are simply fun to watch. The competition among the very best of the world’s athletes is worth viewing simply because it’s so intense. It’s always fantastic to watch the best of the best, whether it be superhero athletes, or even the national finals to win the country’s spelling bee contest.

I get a chill when I see competitions between superb competitors, no matter the subject.