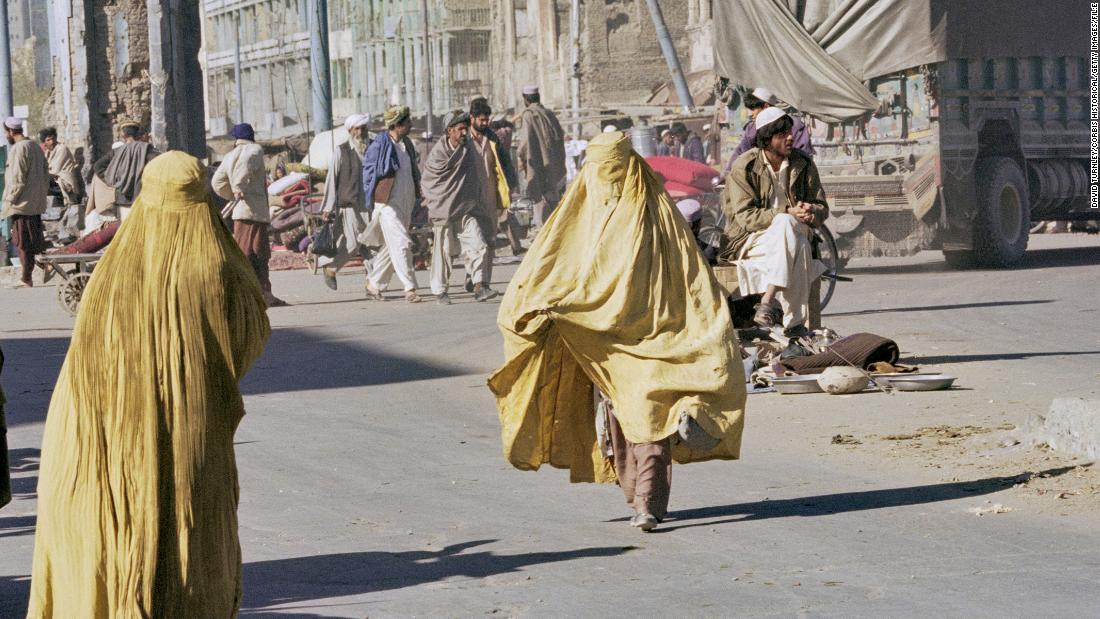 Then, the Taliban imposed their “Islamic Emirate” on the population. While this was not the “caliphate” that was declared by ISIS in Iraq almost two decades later, it was similar enough, not least because the leader of the Taliban, anointed himself “the Commander of the Faithful,” which immodestly claimed not only the leadership of the Taliban, but of all Muslims everywhere.
Music, television and even kite flying were banned. There was no independent Afghan media; only Radio Shariat that blared Taliban propaganda.
In an unsettling echo of how the Nazis treated the Jews, the Taliban forced the country’s miniscule Hindu population to wear distinctive clothing.
These edicts were enforced by the religious police of the Ministry for the Promotion of Virtue and the Prevention of Vice.
I witnessed black-turbaned vigilantes roaming Kabul’s streets like wraiths dispensing their ferocious brand of “Islamic” justice. Curfew started at 9 p.m., and by 8 p.m. the streets were deserted except for the young Taliban soldiers who stood at every traffic circle, carefully checking passing vehicles. Some of the Talibs wore kohl, a black eyeliner, which was particularly noteworthy since women were banned from using cosmetics.
In Kabul, one of the few diversions available were the well-attended public executions in the former soccer stadium. The victims, including women, were stoned to death or shot in the head.
Vahid Mojdeh, a former Taliban official, noted in his memoir that, “the Taliban were ruthless torturers, their most commonly used technique was beating people with electric cables.”
In interviews I conducted with Taliban leaders before 9/11, they defended keeping women at home and shrouded in the burqa by saying these were simply the cultural norms of Afghan culture. But what the Taliban didn’t acknowledge was that these were really the social norms of the Pashtun ethnic group, which made up pretty much the entire leadership of their movement.

For the other ethnic groups in Afghanistan, such as Tajiks, Hazaras and Uzbeks, and the inhabitants of the larger cities, particularly Kabul, Taliban policies were imports from another culture.

The Taliban called it the rule of sharia, Islamic law. In their view, once sharia ruled, Afghans would become virtuous and thus the perfect society would be created. But the Taliban had no real policy to govern. They presided over the total collapse of what remained of the Afghan economy following two decades of war. A doctor I spoke to in Kabul in 1999 said he earned only six dollars a month.
When they were in power before 9/11, the Taliban were pariahs on the world stage. Only three countries recognized the movement of religious warriors, because of their treatment of women, dismal human rights record and their provision of safe haven to al Qaeda.
When Osama bin Laden was forced out of his refuge in Sudan in 1996, he flew to what he hoped to be a new haven, Afghanistan. Once he was in Afghanistan, a Taliban cabinet minister told bin Laden, “We serve the ground upon which you walk.” Another senior Taliban minister told al Qaeda’s leader, “God will never be ashamed of you because you are the champion of the oppressed and you have waged holy war alongside the downtrodden.”

But even the Taliban’s harshest critics before 9/11 could not deny their one achievement: They restored order to much of the country. During the early 1990s, Afghanistan had become a patchwork of fiefdoms held by competing warlords enmeshing Afghans in a brutal civil war. The Taliban defeated most of those warlords and brought law and order at the cost of also imposing a draconian theocracy.

The Taliban are claiming today that they have changed during the past two decades; that they are a kinder, gentler Taliban.

On Tuesday Taliban officials gave their first press conference since their victory. Taliban spokesman Zabihullah Mujahid asserted, “The Islamic Emirate is committed to the rights of women within the framework of Sharia.”

“Within the framework of sharia” is the important modifier in this assertion, since the Taliban’s understanding of sharia means that women cannot work outside their homes, except perhaps in some very limited roles, such as working as doctors who treat only female patients.

Also, Taliban officials have sometimes asserted that they favor education for females, yet in areas of Afghanistan that they have seized control of within the past couple of years, this dispensation only extends to girls under the age of 12.
At Tuesday’s press conference, the Taliban spokesman declared a general “amnesty” for enemies of the Taliban. The crowds of thousands of Afghans that are besieging the Kabul airport to flee their country suggest that there is a high degree of skepticism about these claims of amnesty. Indeed, in May the Taliban beheaded Sohail Pardis who was an interpreter for the US military.
On Tuesday a photographer for the Los Angeles Times documented brutal beatings that the Taliban inflicted on women and children outside Kabul airport.
Meanwhile, women have almost completely disappeared from the streets of Kabul, according to CNN’s Clarissa Ward.
Further grounds for skepticism about a reformed Taliban came in a UN report issued in June that described relations between al-Qaeda and the Taliban as “closely aligned.”

In the years before 9/11, many millions of Afghans lived under the yoke of the Taliban’s incompetent, brutal rule. They have good reason today to be skeptical of the “kinder, gentler” Taliban.

Already the armed resistance to the Taliban is forming, led by Ahmad Massoud, the son of the legendary Afghan military commander Ahmad Shah Massoud who was assassinated by bin Laden’s men just two days before the 9/11 attacks.
Joining that resistance is Amrullah Saleh, who on Tuesday said he is the leader of Afghans; a legitimate claim since he was elected to the post of vice president, while former Afghan president Ashraf Ghani has fled the country.