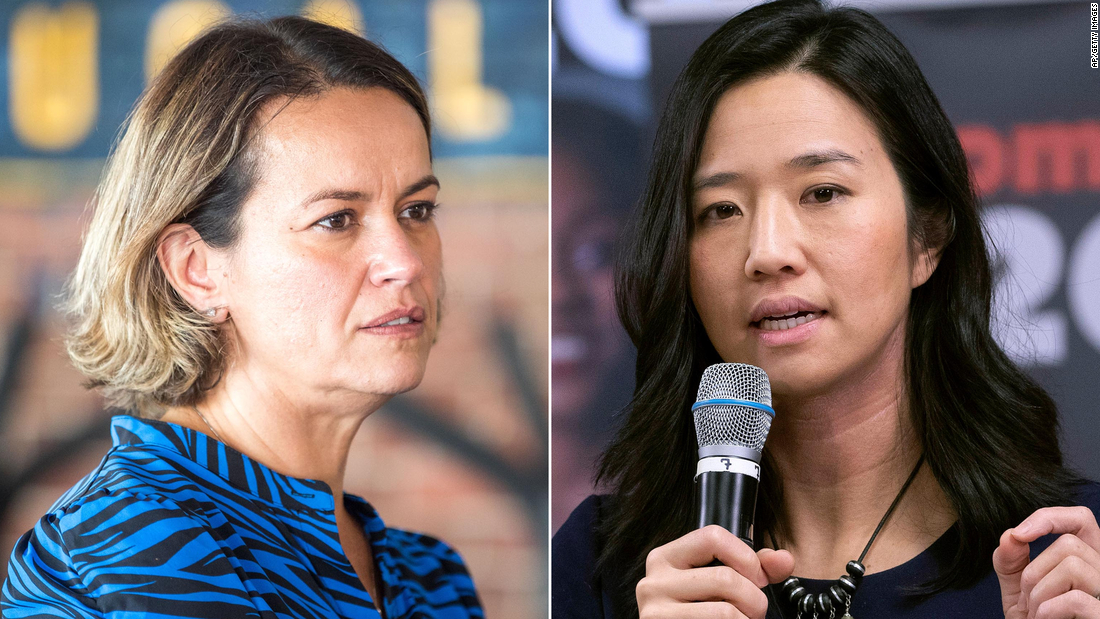 City Councilors Michelle Wu, an Asian American, and Annissa Essaibi George, a first-generation American whose father emigrated from Tunisia and whose mother was born in Germany to Polish parents, claimed the two top spots in Tuesday’s primary, forcing City Councilor Andrea Campbell and Acting Mayor Kim Janey to concede.
In one of America’s oldest cities, the median net worth for White families is nearly $250,000 compared to just $8 for Black families, according to a 2015 study by the Federal Reserve Bank of Boston. “But a closer look at the Fed study shows the net worth of Black families in Greater Boston is more nuanced,” according to a WBUR report in July. The study was a small sample size, but local activists say it did reveal that “Black and Latino families in Greater Boston have far less wealth than White families.”

The city is 53% White, 25% Black, 20% Hispanic and 10% Asian, according to census data. However, about two-thirds of the Black residents live in the Dorchester, Roxbury and Mattapan neighborhoods. A growing number of the city’s Hispanic immigrants live in East Boston.

Janey and Campbell ran on promises for racial equity, with Janey noting Boston’s history of racism.

In the 1970s, opposition to busing turned violent. After a federal judge ordered the city to desegregate its public schools through busing in 1974, White residents responded with fierce criticism. Some pelted school buses carrying Black children with bricks and bottles, and angry protesters mobbed schools. The riots garnered national attention.
Some historians say the busing crisis exposed a problem that persists decades later. They say policies were designed to keep Black people out of communities with better housing, schools and job opportunities.

Supporters hoped Janey would be the one that would help correct these wrongs. As the candidate with deep roots in the city, supporters were confident that she was headed to a November victory after being appointed Boston’s first Black female mayor following the resignation of Marty Walsh.

But in the last six months, Janey has come under fire for controversial decisions including firing the police commissioner and comparing the idea of providing proof of Covid-19 vaccination to slavery-era freedom papers, political analyst Jon Keller told CNN affiliate WBZ TV.

“What you had was three attractive Black candidates…,” Keller told WBZ TV on Wednesday. “If there had been one candidate who is getting all of that vote, they would be a runaway winner this morning.”

CNN spoke with Tanisha Sullivan, president of the Boston NAACP and a staunch advocate of diversity in city leadership. She said there were several factors that led to Janey and Campbell’s defeat including low voter turnout and neither candidate had a message that resonated with enough White and Hispanic voters. Many residents, including immigrants, White progressives and White conservatives, are concerned about issues beyond racial equity and Boston’s racist history, she said. Wu and George appealed to those voters. This interview has been lightly edited for clarity.

Why do you think Kim Janey and Andrea Campbell were ultimately defeated in Boston’s mayoral primary?

It is really about turning out your base, those reliable voters who you can count on on Election Day. One of the contributing factors is both Campbell and Janey are district city councilors who prior to entering this race had very low name recognition. And the two candidates who are proceeding to the finals are at-large city councilors who had already run a citywide campaign. So for both Janey and Campbell, they were starting in a position that was behind, from a base standpoint, the two candidates who are ultimately moving forward. Secondly, Election Day is all about voter turnout. The rubber meets the road when people go to the ballot box to vote. What we saw in the city of Boston was relatively low voter turnout. The third piece is that in a moment where we had an open race and an opportunity to reflect as a city, this was the time for inspirational, bold, visionary campaigns that really motivated people to get out and vote and that required a lot of voter connection. We did not see that, period. And so that allowed for the other two candidates to really ride on name recognition.

What do you think this says about the ongoing fight for Black representation in Boston’s mayoral office?

I think it’s important for us to understand that we are not the Boston of the 60s, 70s and 80s.The issues in Boston as it relates to economic mobility and equity do have a significant impact on Black and brown communities, but what candidates must understand is that the campaign cannot be about Black and White issues. The campaign has to acknowledge that the demographics of Boston have changed. We have people who are not familiar with the lived experience or the history of Boston so they are not moved by emotion or the historical context. A campaign must be one that is able to speak to the issues, present clear, coherent, aspirational policy solutions and be able to communicate it in a such a way that all of Boston feels they are part of the vision. And I think that was a challenge. Neither Wu or George has a record on issues of racial equality, neither of them has a record that speaks to addressing economic inequality. They stayed on the issues that are critically important to the city Boston but really were somewhat agnostic at it relates to racial and class lines. In order for us to reach the point where we can celebrate the election of a Black mayor, we have to understand that the development of a campaign has to take into consideration that the city has changed and what resonates with voters has changed and it’s not enough to say we need a Black mayor, there has to be a message that resonates citywide.

Do you think Boston’s electorate, given the city’s history of inequity and racism, still struggles with the idea of electing a Black mayor?

Absolutely. Race played a role in this campaign. Much of the conversation is about the splitting of the Black vote. I think that’s the wrong conversation. That’s not the end of the story. In order to be elected mayor of the city of Boston, you need more than just the Black vote. Across the ideological spectrum, there were White voters who did not choose to go with a Black candidate. We know Michelle Wu had significant support from White progressives and spoke to the issues that are of concern to that community. Annissa Essaibi George had support from moderate and conservative voters and spoke to the issues that mattered most to them. Where we found ourselves as a Black community was in situation where yes, the Black vote was split but there were not enough White voters or LatinX voters who believed that Campbell or Janey were the right candidates. I do believe it speaks to the work that we still need to do in this city as it relates to racial equity.

Do you find some level of confidence knowing that the two candidates advancing to the general election are still women of color and do you think they will tackle racial equity?

I’m searching to find data to support that for either of them that racial equity is a priority. I haven’t seen any intention that relates to that issue from either of them. Because both Janey and Campbell spoke so explicitly about racial equity in their campaigns and together they garnered 42% of the vote it will be critically important for Wu and George to figure out how to speak to those voters because they will make a difference in the general election in November.