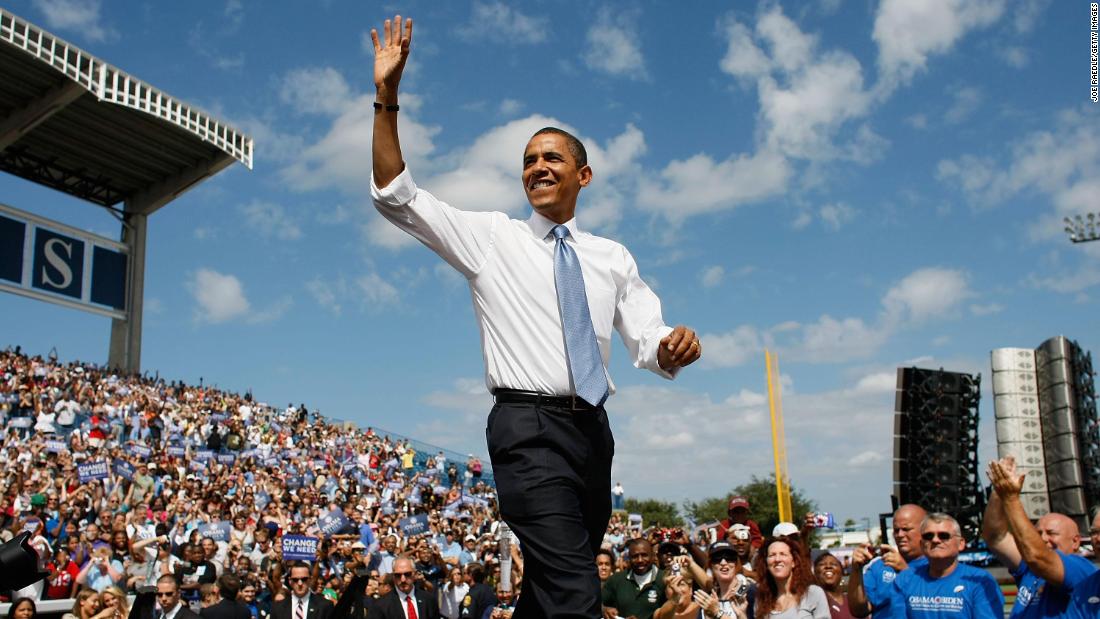 But left unsaid in all of these accolades is an inconvenient question that’s grown even more urgent after a tumultuous year marked by persistent racial divisions, an insurrection at the US Capitol and a partisan divide over wearing masks during a pandemic that’s killed at least 618,000 Americans:

Will we ever believe a political leader who talks about hope and change again?

The fragility of a new America

It’s an inconvenient question, because it’s far easier to celebrate Obama’s legacy than to consider that many of us abandoned the vision of America he embodied. The nation’s first Black president was living proof that the nation could transcend its original sin of racism, that its citizens could find common ground.

It was Obama who said in arguably his greatest speech that “America is not some fragile thing” that can’t tolerate citizens demanding change.

“What greater form of patriotism is there than the belief that America is not yet finished, that we are strong enough to be self-critical?” Obama asked in his 2015 address in Selma, Alabama, on the 50th anniversary of a historic civil rights campaign.

But what happens when a large segment of White America stops pretending it even cares about democracy? What happens when these Americans refuse to accept the results of a presidential election, praise foreign dictators and pass a new wave of voter restriction laws?

These are the nagging questions that lurk in the background of all the recent nostalgia surrounding Obama.

It’s common for pundits invoking Obama’s “tattered idealism” to say the former President has changed since 2008. But American voters may have changed as well.

Obama may be the political version of the Last of the Mohicans — a charismatic leader whose soaring rhetoric about transcending our differences now seems as outdated as a Blockbuster video store.

The multiracial elation we saw in Grant Park may be the last time in many of our lifetimes we witness such unified joy.

Our politics will get even uglier

That’s a brutal thought to contemplate. But consider some of the events of this past year — even this past month.

The country still hasn’t come to terms with a violent insurrection that saw a member of a mob brandish a Confederate flag during an attack on the Capitol while others hung a noose and scaffold outside on the grounds.

A major political party is passing a wave of laws across the country that may restrict voting by racial minorities and other groups that don’t tend to vote for them.

Fox News commentator Tucker Carlson, a hero of the right, traveled to Hungary the same week of Obama’s 60th birthday to conduct a fawning interview with the country’s leader, Viktor Orban, who once said: “…We must defend Hungary as it is now. We must state that we do not want to be diverse and do not want to be mixed. We do not want our own color, traditions and national culture to be mixed with those of others.”
And new census data are raising fresh questions about the future of our democracy. For the first time in the country’s history, the number of White people in the US is declining — a benchmark that’s come about eight years earlier than projected.
The news should make anyone who knows this country’s history shudder. It’s been well documented that a segment of White America will abandon any commitment to democracy if they no longer consider themselves the dominant group.

One can envision a future where White politicians and partisan judges double down on voter restriction laws and appeals to racism in a desperate bid to hold onto power.

That’s why one commentator warned the shifting US demographics are about to “set our politics on fire.”
“If recent history tells us anything, though, it’s that the census news will create a fresh wave of right-wing anger, and that much of it will be directed against America’s minority populations,” Joel Mathis wrote in a recent column in The Week. “Our ugly politics are probably going to get uglier.”

In such a future, there may be no leaders who talk about seeking common ground. There will be no stirring oratory about how America doesn’t have red or blue states. It’ll be a war of attrition where both sides seek only to turn out their bases for elections.

I foresee this future as a distinct possibility. Leaders will keep speaking to people’s fears instead of their hopes. There won’t be any poetry in politics, just trench warfare.

Even Obama, who embodies the idea that the US is a work in progress toward a more perfect union, sounded a note of skepticism in his recent memoir, “A Promised Land.”

“Except now I found myself asking whether those impulses—of violence, greed, corruption, nationalism, racism, and religious intolerance, the all-too-human desire to beat back our own uncertainty and mortality and sense of insignificance by subordinating others—were too strong for any democracy to permanently contain,” he wrote.

“For they seemed to lie in wait everywhere, ready to resurface whenever growth rates stalled or demographics changed or a charismatic leader chose to ride the wave of people’s fears and resentments.”

A different type of hope and change

Some say there will always be an audience in America for idealistic leaders who offer visions of hope and change.

“This is a cycle that America always goes through,” says Melanye Price, a political scientist who specializes in contemporary Black politics and political rhetoric.

“If I didn’t believe that I might as well resign from my job, live off the grid somewhere and prepare for the coming race war.”

She says the US has repeatedly shown the ability to “course correct.” The Obama era was a glimpse of a country whose arc, to paraphrase Martin Luther King Jr., bends towards justice.

“I rely heavily,” she says, “on the Winston Churchill quote: ‘You can always count on Americans to do the right thing — after they’ve tried everything else.'”

Eric Liu, the author and activist, is one of the most eloquent spokesmen about what makes the US so resilient. In one of my favorite books, “Become America,” Liu writes:

“American history is a record of small groups of people who keep remaking this country over and over, and who reveal to us all that the perpetual remaking is the greatest statement of fidelity to our creed and our national purpose, which is not to be like Russia, white and stagnant and oligarchic, or like China, monoethnic and authoritarian and centralized, but to be more like America, hybrid and dynamic and democratic and free to be remade.”

Liu says it may be good if Americans don’t swoon over a leader the way they once did over Obama — and for those on the right, former President Trump. He says change comes from the bottom up. It’s part of the message he preaches around the country to encourage civic knowledge and engagement.

“My emphasis is on trying to fortify people so they don’t need a savior leader to come and put in all their hopes in,” he tells me. “I’m always quoting the great organizer Ella Baker, who said, ‘Strong people don’t need strong leaders.’ “

The massive protests that followed the murder of George Floyd seemed to vindicate Liu’s emphasize on citizen power, not charismatic leadership. It was driven by ordinary people hitting the streets.

But if a large segment of White America abandons any pretense of believing in democracy, I’m not sure we will ever see another leader like Obama gain such wide appeal.

Ours will be a future Obama warned about in his memoir, when the impulses of violence, racism and intolerance will be too strong for any democracy to contain.

If that becomes our future, some may look back and regard the images of Black, White and Brown people sharing tears of joy in Chicago’s Grant Park as quaint and naïve.

And when another charismatic politician says, “There are no red states or blue states, just the United States,” people won’t cheer and rush out to vote.

Most won’t even listen to such lofty rhetoric anymore.

Is this our future? Or will enough people still believe that “America is not yet finished” and commit to becoming the vibrant, forward-looking multiracial democracy that Obama embodied?

Only we can answer.